You Can Purge Your Karma 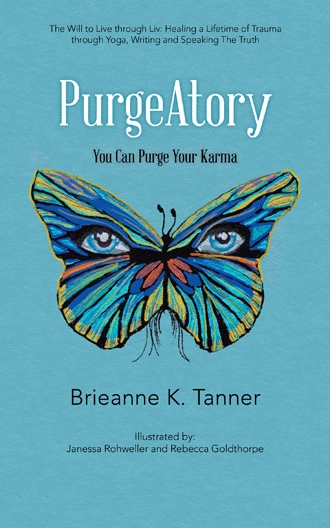 ~Samskaras~ I move through this maze Day after days Some days I think I’ve found the way out, But I’ve really just turned one miniscule corner, only to realize it’s another phase So I keep treading through this thick sand looking for other ways. Accepting there is no way out right now, that you understand my craze. Maybe I don’t need to leave anyway? Because together we’ve created this lovely blaze, without being in a haze. Not in this lifetime, anyways….. In the darkness, she swam and survived, for nine months; not ready to appear in the natural world. This reticence would stay with her for her entire life. Inside she felt abandoned and malnourished so she swallowed her own meconium, out she came, gasping for air with a mouthful of shit Instead of being baptized, she bathed in a shitstorm. How could a pure being already have so much shit in her lungs, and mouth, her intestines? She remembers choking on shit and drowning in it before she emerged from her mother. Separation. They took Liv away immediately because she was yellow and had shit in her lungs and all over her body. Stella never got to hold her right away because of the shitstorm. Whose was it to claim, “Hers or her mother’s? Her billirubin levels skyrocketed as a result of swallowing all of the meconium. Her skin yellowed by a malfunctioning liver, jaundice to the highest degree, but she lived. They named her “Liv,” her full name Lively Sasha Weld. And live she did, she lived a good life for four days in the hospital after lying in rays of artificial sunlight. The light nourished her back to normal. She was gifted with and endowed with head full or black hair. She had a ruddy complexion. She was a hefty baby, 8 pounds, and 8 ounces, rather big for the year 1980. Bright brownish, greenish, purplish eyes and pink lips, her mom fell in love with her appearance after that shit storm passed. Liv’s parents weren’t in the hospital with her for days while she was being fed by the light, not nourished by her parents. She was born in at Children’s Hospital in the heart of Washington, DC: 111 Michigan Ave NW, Washington DC 20010. The breastfeeding approach didn’t work. There had been no skin to skin contact during the first five days of Liv’s birth. Stella was engorged for days while Liv was kept in the NICU. Stella’s friends helped her release the breastmilk by giving her a couple of beers. Oh well, Liv’s Mom Estella had a beautiful baby to show off to the world. She gathered all her porcelain, French laced dressed and wrapped Liv into bundled of dainty threads. Liv was born in September, September 5, the full moon was visible at 99% at 5:18 in the morning during a fierce Hurricane, Hurricane David. David traversed through the east coast coming from the south, specifically east coast in September. The winds howled and hurled through the city until September 9 as Liv stayed quiet. She stayed at peace, stoic in nature, meditative; unsure of how to handle this new world. Who were these people staring at her? Parading her around in outfits? She always looked around, absorbing her environment, internalizing everything. Was she the object or the subject? The puruska or prakriti? Pure Love or a just an adornment? In November, at a mere 8 weeks, Liv was entered into a beautiful baby contest. All she could do was dilate her purplish eyes and look at these people who were judging her on her appearance. Perhaps her mother, Estella was slightly peeved when Liv only received 2nd place. Liv absorbed these vibrations immediately. She wasn’t beautiful enough. She didn’t know how. She still thought love was a state of being. Liv slept silently alone, weeping inside a lot and when she was two and a half, her brother, Reid, “Sweet Baby Reid,” was born. He was adorable and feisty, lovable and full or life. His hair was white

This string of vignettes brings life to Liv, who thinks she is flawed from birth. Although she has endured a life of hard knocks and despite the odds she faced, she has a strong will to continue to live. Guided by her own creative curiosity, she finds a cathartic release through writing and yoga. Along the way on her trip, she meets a Hindu deity; her twin flame, whom she hasn’t seen in eons; and some thugs. On her nonattachment journey, after each tragedy she endures, Liv goes against the grain and loses friends and family not only physically and spiritually. She feels she has already lived many lives during her thirty-five-year-old time frame. The author adds her own knowledge of psychology, street smarts, and spirituality to weave together an enticing, comical, intense collection of short stories. The author shows that no matter how flawed you are, applying self-realization and self-reflection to your life will help liberate you. Additionally, she raises questions regarding reincarnation, changing DNA structure through yoga, and the authenticity of human relationships—all while using colloquial language. She also touches on the narcissistic family dynamic and prompts the question “Who is the real victim in any relationship dynamic?

An INFJ on the Myers-Briggs, Brieanne has been writing since she was a child. She practices yoga daily and raises her son. She holds a BA in psychology from George Mason University and a master’s certificate from Marymount. She worked for Yoga Alliance in Virginia before moving to Michigan.