A Parent’s Recovery Story from Pain to Peace: A Supportive Guide for Grandparents Raising Grandchildren and Parents of Adult Addicts 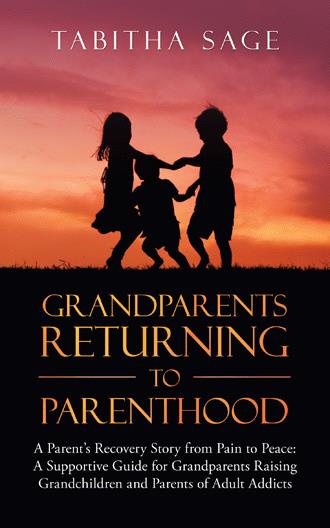 In the U.S., 2.7 million grandparents are raising grandchildren. The majority reason for this is substance abuse which often leads to others reasons such as incarceration, child neglect, child abuse and so on. Facing the loss of a beloved child, not to an incurable illness, nor any other type of final loss but instead, through a self-destruction road due to chronic drug abuse leaves many casualties. Drug abuse is a dangerous trek, not only bringing down the user’s own precious life, but the life of their own children, not to mention the rest of the family and the community. This is a story of a grandmother raising her grandchildren and how she found peace through it all. Her story touches on the years of misery she endured until she hit what the writer calls her own rock bottom, where she couldn’t live in misery any longer. There are three tools the author shares that helped her to move toward healing. She shares about the shifts that took place after implementing the tools and how you can use these tools with children as well. The author is a student of the teachings of Dr. Wayne Dyer and Eckhart Tolle which is much of the foundation of what she shares on how to live consciously and finding peace and happiness when life makes an unexpected detour.

In this Inspirational story, the author gives the reader an inside look into the many years of misery she experienced by her daughter’s drug addictions. Through it all, she was able to find peace and reveals how she was able to recover. Recovery from pain to peace. She was not only was dealing with her own grieve and emotions, there was also the safety and well-being of her three grandchildren at risk. She gives us a glimpse into what she calls, her roller-coaster. “My rollercoaster was filled with shame, fear, anger, betrayal and disappointments”. Her life was truly turned upside down and it caused a lot of pain to a lot of people including her three very young grandchildren who the author eventually adopted. Suffering was controlling her life and she couldn’t live with the pain anymore. She refers to this point as hitting her rock bottom much like she hoped for her daughter to reach, in order for healing to begin. Reaching her rock bottom, opened her up to different forms of healing and transformation. She shares three tools that have contributed to her healing success and how these tools can be valuable to use with children as well. By implementing changes, shifts in acceptance, forgiveness, mind-set and her perception on addiction, took place within her, leading her to peace and happiness. The book is chuck-full of resources encouraging one’s own self-discovery. “My vision is to create inspiration in others to find themselves again and find peace in this unplanned journey”. Through her daughter addictions, raising her grandchildren who are now her children, and her own grief she shares a heartfelt and inspiring journey of a grandmother finding herself and how she did it.

Tabitha Sage holds a Bachelor’s degree from the University of Vermont. She has an extensive background in spiritual and religious fields of study but it took a real-life lesson of climbing from the depths of despair for it to all kick in and for life to start working again. For the last two and half decades, she has been a student of the teachings of Dr. Wayne Dyer. She has completed certified coursework through Eckhart Tolle’s School of Awakening along with the completion of “Becoming a Teacher of Presence” curriculum. There are many other personal growth courses she has studied over the past 30 years that have contributed to her growth and healing. Tabitha turned her devastating journey, coupled with her extensive spiritual studies to provide readers loving and supportive steps towards their own healing and awakening for a better life, not just for one’s own self but for the entire family.