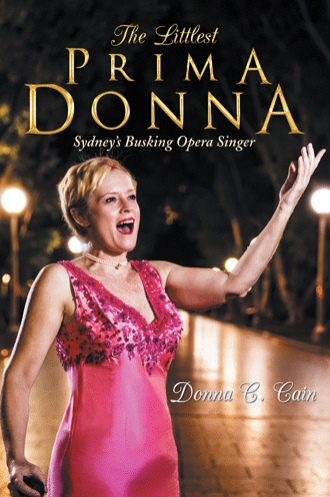 For author Donna Cain, life forced her to stretch in a way she never planned for herself. Because of financial struggles, she began busking to supplement her income as an accounts payable contractor. With a highly trained voice, honed throughout many years of singing lessons, Cain is not a garden-variety busker. She’s an opera singer busker.

During her first year busking, Donna felt like an exhibitionist willingly stringing herself out to be humiliated. But busking allowed her to survive between one office job ending and the next one commencing. In The Littlest Prima Donna, she presents a series of vignettes telling what life is like busking as an opera singer in Sydney, Australia. Sharing colorful stories taken right from the street, Cain offers a glimpse into the fears, doubts, and struggles, but also the joys and glories that accompany a self-employed street musician.

With photographs included, The Littlest Prima Donna provides insights into the rewards and the challenges of the work. It gives a unique peek into Sydney society and a look at a broad slice of human nature across many cultures.

Donna Cain has busked at Martin Place, Hyde Park, Pitt Street Mall, and at Circular Quay in Sydney’s Central Business District. She also sings for corporate events and at weddings and performs with the chamber group Ensemble Spiritoso. For more information visit: www.dcprimadonna.com or www.ensemblespiritoso.com