Death of a Spouse 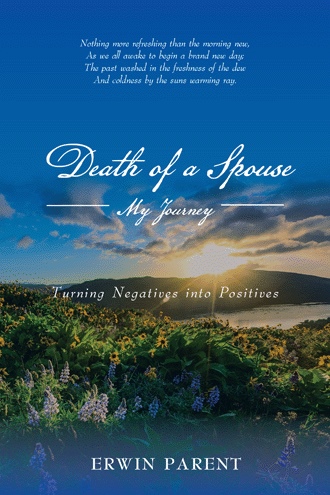 From Chapter 6 Losing Rosanna The final days Hospice Care was continually visiting day and night. Members of the team included the physician who was the medical director, an RN Case Manager who was coordinating the support given also Health Aides tending to bathing and personal care. One would write a report and go over it with me before leaving. On Wednesday, Rosanna’s son Jay called and said he would be flying down on Monday. I was so glad; Rosanna would be pleased to see him. He talked to her on the phone. The Hospice Care nurse called to ask if everything was alright. Giving me some things to watch for when the end would be near. There was such calmness in her voice. I made notes, hoping it would never come. This group was so professional; they knew everything and had so much experience. I was so glad they were available. I thought back to Virginia’s passing. I sure could have used something like this. The lights were still off; I lit candles to give some light. We had lots of candles and used them often. ….I want to see the candlelight dancing in your eyes… … I want to hear your happiness in a million sighs.. ….Oh God…The candlelight was no longer dancing in her eyes, ….I no longer hear her happy sighs On Friday, the day was so long. Late afternoon I went into her office to look out into the back yard. I saw a rabbit near the window. We’ve had them in the yard before; they usually hop around looking for green shoots out of the ground to munch on. This one was not moving around, he was in the shade under a bush. On Saturday morning, I received a call from Hospice Care, they read the doctors report. She again gave me a number to call if there were signs indicating the end was nearing. I wrote it down. Since I was in the office I looked out the window again and there was the same rabbit. Still not hopping around or eating but had moved to a different shrub for the shade. During the day, on Saturday I made sure Rosanna was comfortable and gave her the medication at the prescribed times. Someone from Hospice Care came by to tend to her needs in the late afternoon. While she was there I returned to the office. The rabbit was still in the yard, still not eating or hopping around, but I saw it had moved to a different shrub. I thought, how strange, to hang around this long, it was like it was on duty. Like there was a purpose to the visit. During Saturday evening I remained quiet, so she could sleep. I sat nearby dozing in a chair. When I woke it was after midnight. I checked on her and she was exhibiting the behavior I was told to call them about. When I called from the office, the person was so calm. We continued talking; she stayed on the line with me. I laid the phone down several times and went in to check on her. I performed what I was instructed to do each time, such as holding a mirror under her nose. She was less responsive and had shallow breathing. Finally it was over. She was no longer breathing. They would send the doctor over immediately to confirm and fill out the necessary paperwork. I called a pre-arranged number to have her picked up after the doctor left. I gave the papers to the people and she was removed in the wee hours of the morning to be cremated. …My darling girl was gone. I was alone with God, just as before. … I love you more than heaven’s garment hem can reach … Oh God….please keep her close by I sat at the kitchen dining area table and sobbed. I fell asleep there, near her kitchen, her favorite room in the house. When I woke I was slumped over the kitchen table. It was getting light out, but still too early to call Jay to tell him the sad news. I looked across the room at her piano, pushed aside into the corner and the bed, now empty. The writing tablet under where I fell asleep was wet from my tears. I had written something before falling asleep. I kissed your brow a final time before you slipped away, I hope you were aware, I prayed that you would stay; I told you that I loved you; I hoped that you would hear, I held your hand; did you sense that I was near? During the night after her passing, I would hear her calling me, “Erwin, Erwin” I would jump out of bed and rush out to the living room, saying “I’m here, I’m here” I would even check the other rooms hoping she was there. This lasted for several weeks. Once awake it was difficult for me to get back to sleep. While she was ill there was a lot of activity, people coming and going at all hours of the day and night. Now there was only quiet, a stillness almost unbearable. I would often sit and cry over the loss of such a dear wife. I needed to find a way to move on, as I did before. …Oh Lord help me, please bring her back.

Each Chapter has a Summary to share thoughts on various subjects. This allows me to discuss thoughts of suicide, moving on with your life and handling other matters such as honoring your loved one and consideration of family members. I had the pleasure of being in a writer’s group with author Erwin Parent during the winter and spring of 2015. Every month I was more than eager to read segments of his book, Death of a Spouse-My Journey. After my first go-around, I knew to always have a box of tissue on hand for each chapter that we were to review. Early morning sobbing was not unusual as I went through the pages. Poignant, sweet, heart wrenching, biblical, magical as well as a teaching tool for those going through sorrow, Erwin’s memoir touched something deep inside of me. His beautiful rhythmic, rhyming poetry as well as his simple, clear writing style somehow touches the reader on a very sweet and tender level. I fell in love with not only his two precious wives, but also the gentle man telling the story. Erwin Parent is a wonderful example that no one is ever too old to make a difference. A must read for everyone, because we all will go through similar times at some point of our journey. Silver Pennee Bradstreet Lamb Self-Published Author

Erwin Parent is new to the literary world. He began writing poetry after the death of his first wife. He has not stopped writing since. His first book, a Memoir, will be followed by four books of Poetry. Erwin resides with family in Modesto CA.