How to Save Your Fourth Marriage

One Person Can Transform a Relationship 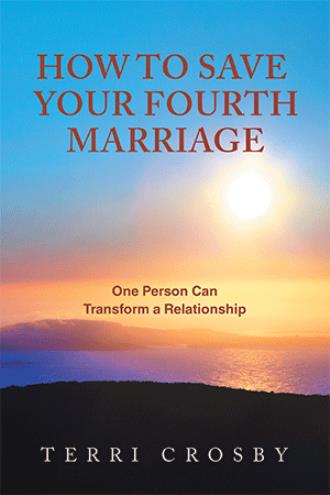 The thought of a fourth failed marriage sent me to my knees. Why was I unable to keep an intimate relationship happily on track? Was something wrong with me? My failures, as I saw them, were personally difficult and professionally embarrassing. Either I was a relationship coach with bad luck and should be excused from the team, or I hadn’t yet learned what made marriage work. Turns out it was the latter. How to Save Your Fourth Marriage is what I did—I saved my fourth—which could be considered a miraculous accomplishment, given that 93 percent of fourth marriages end in divorce within five years. Marriage might be one of the few activities we engage in where, for many of us, the more often we practice it, the worse our chances of success. Whether you’re having difficulty in your first relationship, or you’re heading into marriage number eight, the information here is for you. It’s not so much about how many times you’ve tried, but rather, do you want your relationship to work or work better? Do you wish to be happier together? If you love each other and don’t know how to get along or how to become closer, this information is especially for you. Even if you’ve given it your best shot and have thrown your hands up, there is still hope. There is hope because the quality of your relationship with your partner lives within you. The facets of how you relate to you are reflected by those whom you call partner, ex-partner, friend, enemy, and family. The way you treat others represents the way you treat yourself. The relationship you have with others is the relationship you have with yourself. If you have an intimate relationship you believe is worth reviving, look no farther than your own heart and mind. You’ll save years of frustration and circling back if you can love yourself enough to change. You’re the one—the only one—who can transform your life. By transforming yourself. You hold the magic wand. You can free yourself to be the person you are. When you liberate yourself to become true-you, this invites people around you to respond more freely as well—to be true-them. How This Book Is Shared with You I’ve done my best to make this book easy to absorb, with stories, bullet points, and suggestions. There are also dialogues with clients, using the names Him, Her, and Me. These consulting sessions show how issues are multilayered, how a seemingly small trouble spot, when unraveled, gives way to substantial understanding. You’ll track how new possibilities begin to make sense to a client, and to yourself, too, as you read. I’m thankful for the generous men and women who have allowed me to write conversations based on those I had with them, so that I could offer them to you. Although my fourth husband, Eric, passed away in 2017 from cancer, you’ll get to know him and the journey we traveled together through shared stories and examples. Transforming my relationship with Eric taught me that it was possible to shift even the most stuck or awful circumstances by changing patterns that had been mine for a long time. I learned that it was possible to revive a relationship in its last gasps by reviving me. I would not have believed this sort of thing possible had I not experienced it myself. Finding a deeper and more satisfying relationship with Eric was a miracle from every angle. CHAPTER 1 If at First… I entered each of my marriages with hope and dedication, believing that my partner would be the one I’d cherish forever. We would grow together. We’d fall more deeply in love over the years and hold hands into the golden sunset. My hope each time was that this marriage would be the one. Faces and places certainly changed, but I was the common denominator. My marriages perfectly mirrored me and my patterns. Each marriage began as a happy-go-lucky summer breeze, and then sometime between three and five years later, the icy north wind blew in. My fourth marriage followed the predictable pattern. In the beginning, Eric and I were carefree and relaxed—truly happy. We delighted in each other’s company and laughed easily and often. We found agreement in all the right places. Sex was wonderful, the best I’d ever had, especially that Eric seemed to know my body. He could somehow sense what pleased me physically without me teaching him, which was a new experience. But time passed, and by year three our joy had faded. By year four it had practically disappeared. What I noticed most was that Eric had become a weak version of himself. He was less adventurous, less of a risk taker, less bold. Instead of showing him compassion, I was annoyed that he’d gone soft. He no longer carried himself with the confidence he had at the beginning of our relationship. He deferred to my decision-making, seemed depressed, and drifted from one day to the next. Even so, I plodded on, hopeful that things would change. I wanted us to find our happy little bluebird place again. One typical weekend morning, I opened my eyes to a lovely Sunday in Southern California, cheerfully anticipating the usual chat with Eric over coffee. No disagreement hung in the air, nothing wrong that I could see or feel as I wandered contentedly to the kitchen to prepare a breakfast tray. But upon my return I found Eric slumped against the bed pillows, looking defeated. I wondered if a bad genie had slipped into the bedroom while I was away, decked Eric, and messed with his mind. It had been a surprise attack, and Eric had totally lost the fight. Instead of being curious or open, I braced myself for the conversation. I felt critical, impatient, and worried in those seconds standing there, coffee in hand, in our bedroom. A wide river of fear ran through me. 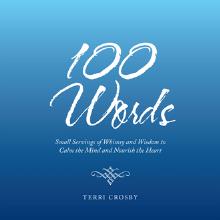 Whether you’re having difficulty in your first relationship, or you’re heading into marriage number eight, the information here is for you. It’s not so much about how many times you’ve tried, but rather, do you want your relationship to work or work better? Do you wish to be happier together? If you love each other and don’t know how to get along or how to become closer, this information is especially for you. Even if you’ve given it your best shot and have thrown your hands up, there is still hope.

Terri Crosby is a relationship coach, educator, and speaker with a private consulting practice for individuals and couples. She believes that responsibility starts (and stays) with ourselves, and that it takes one person to transform a relationship. To save a relationship means to live by the truth of it. www.InCareOfRelationships.com.