A Buddheo-Christian Art of Transmuting Pain 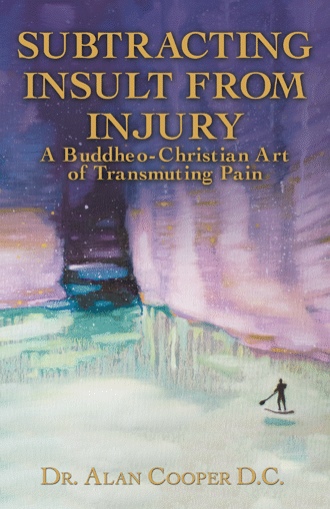 Astrophysicists have conclusively established that once upon the timeless place, afore the Big Bang t’was even a twinkle in the Infinite Eye, all that existed was constrained into an unfathomably, solitary, dense Black Hole-like singularity. Unitary and imploding as it was, they have aptly baptized it the Primordial Compression. As such, it initially harbored seeds of but a single primal sensation: quintessentially dense, contracting, penetratingly gravitational. If we were to anthropomorphize, it is fair to say we might dare christen the experiential perception of this feeling, pain. After eons of unconditional immobility, following a fundamental law of physics, there was an equal and opposite reaction to the ostensibly never-ending dark contraction; Let there be light! A hallowed birth! A Big Bang! The here-to-fore eternal Black Hole ruptured into trillions of smaller particles of dark matter and energy. With many of them wedded to nascent bits of the exploding expansiveness we know as Light, the pain had been divided into exponentially more manageable, healable and illumined increments. That which we call God, Goddess, The Infinite, or Cosmic Consciousness, had hatched a sacred curative design. In this burgeoning strategy, much of these newly expanding specks of dark matter and energy ultimately came to rest in the divine creation of human beings. Replete with a qualified modicum of God’s capacity for insight and expansive soothing, each of these souls was requisitioned to thus alchemically lighten an allocated portion of the original dense dark Primordial Pain. As ‘The Plan’ entailed, each individual’s allotment of Primordial Compression emerged from their gut/soul, in karmic unconscious, time-encrypted rhythms. These increments of Dark Matter and Energy (Dukkha), were thus to be healed through daily living, loving, art, work, and our noble quests to make life vibrant and meaningful. A cosmic miracle was afoot, except….. As astronomers note, our universe consists of roughly 90% dark matter and dark energy, and but 10% our cherished Light and visible matter. Accordingly, when massive waves of Primordial Compression first emerged to be rehabilitated through the soul portals of the earliest prototypical human beings, these ultra-dense sensations predominantly overwhelmed the relatively limited capacity of the skimpy Light. Though God had done the best He initially could, the human contraption was by nature impeccably flawed, and the precarious Plan began to falter. Infinite Consciousness deemed that “Knowing What The Gods Know” of the daunting task of healing something nine times bigger than Light, was turning out to be a fruit too extreme to bear. Alack and alas, with a tad of tinkering and celestial sleight of hand, Ego was thus conceived to play a shell game with the dark, heavy Reality. The Tree of Knowledge was forbidden, and humans were re-designed with Alice in Wonderland trapdoors to a house of mirrors, in Ego-ville. Like a modern day game of Laser Tag, in Ego-ville the Light in a human soul no longer was compelled to drearily shine on its own voluminous mountain of Darkness. Instead, it shot its beams outwards at one another, and by cognizance of the shafts of light that returned in reaction, an Ego initiated generating a biography. Immersed in this fresh holographic potpourri of imagery, a human was suddenly at liberty to behold oneself as an amalgamation of all the light beam impressions others shot their way. With beams bouncing off the walls of our minds and hearts, it was cool to forget the painful reality of our Origin and the dispiriting task we had been created to carry out. By moving the seat of consciousness out of the Gut/Soul and into the Mind/Ego, Light could thoroughly pre-occupy itself with juicy skullduggery and illusory points of view. With a colossal sigh of relief, humankind dug in for the long journey, opinions proving to be much more palatable than the nuisance of cumbersome energy and feelings. With these capricious deliberations in tact, Egoic Ignorance was institutionally cast in stone, as bliss. But like all potent intoxicants, the bliss was fleeting. As history has appallingly exposed, to keep the Laser Tag adequately powerful, the dominant ego-matrix has had to remain fervent in veiling the truth. It accomplishes this by pigeonholing all emergent sensations of Primordial Compression, into dominions of failure, vengeance, and tragedy. We were, and are still therefore reduced to living in a near constant state of ‘Adding Insults to Injuries.’ We are beholden to fallaciously categorize every opportunity our earmarked portion of density arises to be mended, as sad, victim-tainted, presumably needless and avoidable occurrences. As our relatively unsophisticated minds clumsily trample on the delicate enigma that is at the roots of the Forbidden Tree of Knowledge, we live immersed in the child-like shelter of dualistic ‘Good’ and ‘Bad.’ If something we deem as bad happens, we full-heartedly ascribe goodness as its implicit opposite antidote. Assessed as such, inquiry dies. The gifts of complexity and nuance are lost. The good guys will beat the bad guys. Those we perceive to be misbehaving will eventually comprehend our martyred pleas and listen to our self-righteous complaints about their malfeasance. And, above all, the Good God will wipe away the pesky bad parts of humanity. “Daddy save us, destroy the bad guys (and win me the lottery while you're at it if you have a sec)." And since the Ego exclusively communicates in this Morse Code of good-good-bad-good-bad-bad, virtually every pain is, by nature, deemed dangerous. A punch-drunk boxer bobbing and weaving and having been created solely to hide the adversity of the truth, the ego flourishes by vilifying that and those it deems to be the cause of our pains. And when the weight of primal density invariably breaks through our egoic dam and floods us despite our best efforts, we castigate ourselves as being beneath contempt. "Woe is me; I am far too feeble and frail to resist the evil ones." Insults, insults, what to do?

When a bear, eagle, whale, elephant, camel, and other creatures experience pain, they react sanely. Instead of getting hysterical, they find a safe, calm place to heal and be gently settled, which fosters their natural restorative, pain-relieving endorphins and potent immune stimulators to be released into their bloodstreams. Without a pharmacy, medical clinic, hospital, surgeon, or psychotherapist, they instinctively lay still and start to heal. Humans, on the other hand, add to their anguish by entering a fight, fright, or flight mode, which should only be reserved for life-or-death moments. We spook ourselves and compound the problem at hand by thinking things such as: • Crap always happens to me. God must hate me. • I bet this pain in my armpit is cancer. • These pains will never go away. I’m just a loser. • If they force me into less pain meds, I can’t make it. Break free from those thoughts and discover an endorphin paradise with the insights in this pain-relieving guide. Dr. Alan Cooper explores why humanity has lost its natural pain-abating ability and how trusting our guts—literally—can help us overcome our fears, pains, and personal traumas to heal ourselves.

Dr. Alan Cooper is a practicing Doctor Of Chiropractic, Chronic Pain Specialist, and Medical Hypnotherapist. In this, his latest book, Cooper first caresses those presently plagued by the opiate epidemic, before challenging us all in the final analysis to behold clues Buddha and Christ planted to clear our last impediment to enlightenment; our erroneous dualistic resentment of pain.