Behold They Are One 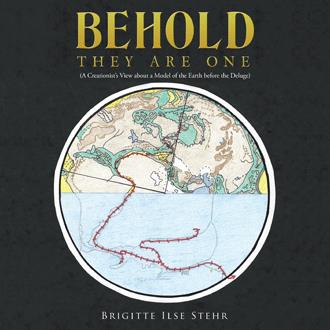 The Earth a Circle on a Sphere The Creation model explains that the earth once was called a face (Isaiah 40:22) and medieval men in the past seem to have interpreted this as a flat circular earth that earned them a lot of ridicule after it was discovered that the earth was actually a sphere and still today people laugh about it, why? Was it not worthy to reconsider that the land upon the planet previously consisted of a circle on a sphere? Like Wegener’s eye once caught the likeness of the two coastlines of S. America and Africa so can we unlock the secrets of our planet’s past only we will go first to the Pacific Ocean and observe an amazing pattern? Towards the four directions of the planet earth we perceive from above the waters, that most continental perimeters (edges) have a convex or slightly convex curvature. This is especially so towards Asia as they scallop along the island arcs, see Fig. 1. From this point of observation it doesn’t take the eye of an expert to see that but for the south all continents are connected together at least at shelf level. Down south in the Antarctic Ocean, however, Australia/New Zealand and South America fail to make the connection to Antarctica, see Fig. 1. From this point it is also apparent that Australia with New Guinea and New Zealand shape out a right angle into the Pacific Ocean which is not the story below the waters where Australia is actually still connected to Indonesia on shelf level at its north-western side. In order to visualise the simplicity of the following gigantic hypothetical picture we have to imagine we could move this convex curvature from the edges of the Pacific Ocean to the other side of the sphere and position it at 90º to the four directions of the world. It will soon become apparent that the convex nature of the curvature will change to concave and form the outline of a circle on a sphere, for example the Aleutian Island Arc perimeter would change shape from convex to concave. Recognising this means that the demise of the circle could have easily come from within by the formation of the 4 of the 5 oceans of the world replacing the division with a lot of water whose masses could only have come from a Deluge scenario, we just need to read the Bible properly. Evidence to support the idea that the shape of the earth may once have been a circle on a sphere also comes from the fact that the continental perimeter towards the Pacific Ocean is seismically very active and very volcanic. It is no coincidence that this perimeter of the earth should be called the “Ring of Fire” and it is obvious that if the perimeter changed position by a sinking and/or pushing force it would scratch and cut the ocean floor which would react very likely with volcanoes. This perimeter also includes the Trans-Antarctic Mountain Range of Antarctica with the active volcano Mount Erebus. The question of course arises if the land on our planet was a circle on a sphere how would this system have been balanced in the past since water is considerably lighter than the continental crust consisting of the Aluminium Silicates (SIAL) and the theory is that the Pacific Ocean on the other side of the sphere was shallower and the Magnesium Silicates (SIMA) below this ocean may have been thicker. The SIAL of the continents is of course slightly lighter than the SIMA. In the north-eastern Pacific on N. America’s western shores this ocean is quite shallow compared to Asia’s. During the upheaval of the Great Flood however, mountains formed and as is going to be discussed later these in some instances formed a mechanism to counterbalance the upheaval of the Deluge not only on land but also in the oceans below. Therefore the Pacific Ocean may have formed deep basins during the Deluge to keep the earth balanced and the uneven ocean floors that we see today have at various places produced heat reactions such as volcanism because the heat source of the earth is more immediate in the deep oceans. Naturally if the earth once was a circle on a sphere its topography would be differently organised over the sphere than that of divided continents and this may have influenced also the inside of the earth where the latter creates its own magnetic field from the electric currents generated by the liquid iron-nickel core, the geodynamo. Presently: 1. The magnetic North and South Poles are not aligned with the Geographic North and South Poles; 2. The two magnetic poles are not directly opposite each other on the globe and the North magnetic Pole is accelerating to Russia; 3. The magnetic axis is tilted at an angle of ±11º w.r.t. the rotational axis; 4. The Geographic North Pole is defined by the latitude 90ºN and is the axis of the earth’s rotation which is tilted with the perpendicular; 5. Secular magnetic variation or surface magnetism of the main or core component undergoes a slow change that necessitates continual adjustments. Over the last two centuries the dipole strength has been decreasing, etc. For the sake of simplicity the earth in this model has been given a circular form perhaps such as the moon’s face with the circular shape still visible on shelf level so that the real alteration to today’s situation is the closure of the 4 of the 5 oceans proving that the circle was always present. The diameter of this circle from east to west has been obtained by placing Africa with the Soudi Arabian Peninsula attached into the Argentine Basin of South America where it is believed to have come from followed by the Indonesian Shelf with Australia and New Guinea properly attached to this shelf. For the scale of 1:40 000000 a diameter of 20cm was obtained and has been used to draw the circular earth.

As mankind gets concerned about global warming, shouldn’t we look at other characteristics of the planet’s physical world as well that are contrary to their millions of years’ time busy changing fast? Today the rotational and magnetic axes do not coincide, but the magnetic North Pole is shifting from Canada to Russia at an accelerated speed. Is the magnetic axis balancing out from a previous worldwide catastrophe such as for example the biblical deluge, and is this important to us? In a time when the theory of evolution has progressed beyond all levels of speculation, are we ready to trust mankind to explain to us 4.6 billion years of science regarding our origins but stopping short at the Bible, the book that has survived more than two thousand years? Are there no more answers to be gotten from the book of books? As the title implies, Behold They Are One suggests a kind of unity and describes a model of our continents once having formed a circular landmass on our planet called Eden, and not Pangaea upon which occurred the biblical deluge. Behold They Are One makes very interesting reading for those who are concerned about their surroundings and worldwide geography. Remnants of the earth’s previous circularity can still be seen today.

I am originally from Europe with roots in South Africa to which I returned completing a BSc degree in agriculture with extra subjects in chemistry II and soil science IV, which enabled me to work in the field of pedology(Soil Science). This involved the mapping and analysis of South African soils for their potentials, which were compiled in land-type surveys. For personal and national reasons, I took early retirement; however, my love for geography never died, hence the writing of this book.