The Other Side of the Bayou 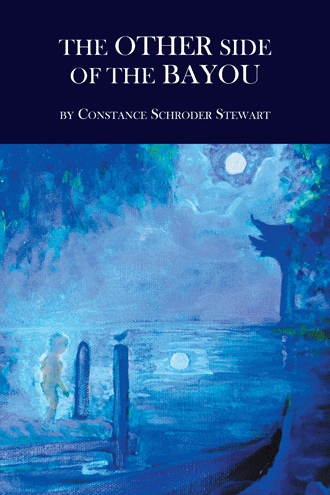 CHAPTER ONE ~ My Breastcapade: Journey of Frisky Cells ~ September 16, 2015. During a preventative screening, a mass was discovered in my right breast. I’d felt the lump many months earlier but because I had fibrocystic tissue, didn’t have it checked out. I didn’t rest easy and turned to some of my old tried-and-true ways of dissolving the lump, none of which worked. My intuition was beginning to nag at me during the day and in my dreams. One morning shortly after my first MRI, I awoke to a message. The voice, which I believe came from my Higher Self, clearly and firmly said, “Oh, you have cancer all right, but you’re going to be one of the very, very lucky ones”. I was both frightened and a little relieved. This would be one of the bigger challenges I’d faced as an adult. While I was waiting for the diagnosis, my beloved eighteen-year-old orange tabby cat friend, Roux, crossed over. I was devastated. Traveling side-by-side in many of my dreamtime adventures and countless lifetimes, we’d been together longer than I’d been in any peer relationship. I’ve had cats all my life but none like Roux, whose self-appointed job was to watch over me. Frequently helping me with clients, he was a magnificent being. Those closest to me saw what I saw; some days Roux took on the appearance of an Egyptian feline with elongated ears and a pointed face. He frequently mirrored my own psychic energy and, like me, enjoyed nothing better than when my dear friend visited and gave us an Egyptian Reiki treatment. Having the diagnosis delivered the same week that Roux crossed over was brutal. While on the phone with my doctor I felt suspended in time. Invasive ductal carcinoma. Was he speaking in slow motion or was it me? I could hardly believe what I’d heard yet my intuition told me it was true. I did my best to maintain control but my mind was reeling. The very mention of cancer sucked me into a powerful vortex of terror similar to what I’d known as a child. I had to struggle to stay present. I wasn’t afraid of dying; as a child I got used to thinking I would die before the age of twenty. What I was afraid of was living with a serious illness. I was also fearful of telling my son. I wanted to shield him from my fear, but I soon realized that wasn’t my place. He had a right to his own perceptions and feelings; I would never wish to stand in the way of his very personal process. Ty’s response was simply, “This won’t be the thing that takes you out!” We laughed. It was just the comic relief we needed in an incredibly somber moment. From that moment on, he has been a quiet - yet strong - supporter, exhibiting a greater gentleness and kindness toward me than ever before. Since that day, I’ve hand-picked a wonderful team of physicians who were not only amply equipped to help me through this medical voyage but who also (I strongly suspect) subscribe to beliefs that fall outside of traditional science – even if only when off duty. Besides letting all my docs know that I am a healer and believe strongly in the power of the mind, the Universe, Spirit and naturopathic medicine, I have politely insisted that they all humor me in one particular area. Far too many people even fear the word “cancer”; 21,000 people die daily from cancer; 35,000 people are informed each day that they have cancer. Asking each doc to refrain from using the word, I let them know that the term “frisky cells” works better for me. It’s not only a description that I can wrap my head around, it also greatly reduces my fear response. I explained that I did not want to tap into the collective avalanche associated with such a diagnosis. This one action alone has allowed me to face this journey less as a victim and more from a positive position of strength. (The radiologist was very interested in my philosophy and stated she’d not heard this before, further inquiring as to whether I’d be interested in becoming a patient advocate.) Realizing that the western medical system at large represents the patriarchy, I innately understood that I had to quickly find equal footing. This was a huge opportunity to further heal remaining old fears of the masculine. It was eye-opening to discover how many (all) of my doctors and nurses were unaware just how horrifying and debilitating the “C” word can be to patients. Maybe they know but can’t go there. In any case, I did my best to bring them into my reality rather than get sucked fully into theirs. Sitting in the crowded waiting room, I tried to prepare myself to have my first Come-to-Jesus meeting with my surgeon. I planned to let him know that this adventure was far more than a physical endeavor; it was an opportunity for a transformative spiritual journey of significant impact. I’d sit back and observe his response, which would let me know if I’d chosen the right doctor. While waiting for my name to be called, I drifted back to my early youth, recalling a day so very long ago when I had a lump on my chest (same side). I couldn’t help but wonder how my deeply held and unspoken childhood fear of dying had manifested in the present. Had this terror - so deeply buried for the sake of sheer survival - finally caught up with me? Had I not been too afraid to speak with my mom about it, would I be on this daunting detour today? I would need to spend time with a burdened past so tainted by repeated violent abuse, severe mental illness, addiction, tragic loss and frightening paranormal events. Like it or not, a trip down memory lane was on my horizon. To know where I’m going, I must know where I’ve been.

Faced with a devastating diagnosis of cancer in 2015, I knew it was connected to my past. Had my childhood belief about my own mortality come to pass? My relentless struggle to escape the shadowy world of abuse, mental illness, addiction and tragic loss created lifelong struggles and cancer threatened to bring it all back.

Wanting nothing more than to flee my wretched youth, I found reprieve through my psychic gifts and “jumping” out of my body. As my paranormal abilities strengthened, so did my father’s desire to control me.

Mama knew about Daddy’s late night visits, but very little was expected of her because of the Schizophrenia. Even in her own psychotic world, Mama “knew” things. She chose to turn her back on me for reasons I could not understand while she prioritized the safety of my siblings.

Daddy tortured my oldest brother and hero, Ricky, until he ran away. Freddie, institutionalized with cerebral palsy, escaped life in our God-forsaken family. Catherine, who was sickly and scared of her own shadow, hid in the closet during Daddy’s most unbearable attacks on me. Luke, the youngest, was most tuned into my psychic abilities and also exceptionally gifted.

Savagely beaten at age sixteen, I was physically ejected from my home. Clothes strewn on the front lawn, I had to suddenly find a place to live and a way to support myself. The excruciatingly lonesome journey back to myself consists of a myriad of heartbreaking relationships, bizarre paranormal experiences and harrowing twists and turns taking me from the mystery of old New Orleans to the sandy beaches of San Diego.

Lessons learned in the darkest of times bring the greatest light.

As a Psychic Medium, Constance’s respect for the paranormal began in childhood and grew to encompass a strong belief in energy healing. Cutting cords, mediumship and space clearing are among the many gifts she shares with others. With clients around the world, Constance currently resides in San Diego, CA.