(Profanity)?! How I Went From an Atheist to Quantum Wizard in Less than a Decade! 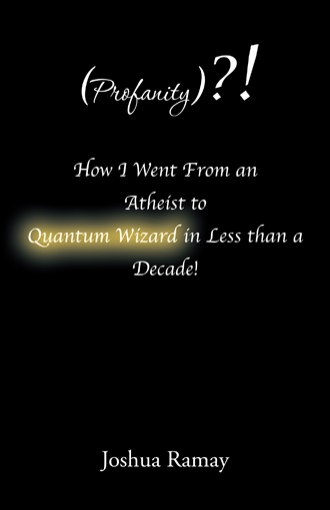 Warriors of the Light,

require a wheelbarrow for comfortable travel.

I also wish to thank,

Attempting to describe or explain spirituality to an atheist is about as futile as cooking a 3-star Michelin meal for a man with a burned tongue and sinuses, or playing a Mozart sonata to a deaf person, though I shall make the attempt. How to explain that we are not delusional due to their faculties’ inability to register spiritual realities upon their organs of perception, or how truly wretched or sad this is, and how fortunate they are, at least in a way, to not feel their extreme loss? I will make that attempt nonetheless, as so many have before myself.

The cynic, or extreme skeptic, is the worst form of intellectual coward; this way they get to be right no matter what.

I suppose that an introduction should begin by introducing one’s self, especially if the book is moderately autobiographical, so…pleased to meet you! My name is Josh. And you are? Well, that’s THE QUESTION isn’t it? I used to think that I knew who and what I was, though I can’t say I gave those notions very much thought or import for the first nineteen years of my life. Like many of you, I was taught, especially in school, that scholastic knowledge was power and its acquisition the only path available to us all to bend life to our will, get what we want, and pursue happiness. It helped me, or so I thought, that I didn’t believe in God. Did I mention that? Of course not, we just met.

What a hindrance, I mused, would it be to climb over endless dogmatic, mythological codices that the world’s religions were threatening the earth’s children with?! A Creator, who with a Word created the Universe, galaxies, and worlds without end (and All-Loving no less) would arrange to endlessly torture those microscopic creations heralded as His children for non-compliance of the vaguest of rules, hallucinated by men (and only men) who would have probably been institutionalized by today’s medical/psychological standards?

Crazy-town, I thought. Why should I cripple myself with such hypocritical, fearful nonsense when all I saw in the world was that brilliant, intellectually oriented individuals guided the course of today’s humanity (albeit haphazardly)? I was not a sheep, and certainly no lamb. I sought to be a shepherd.

I’ll admit it, I wanted at different points in my life to believe, despite the endless forms and quantities of destruction that differences in religion had wrought, that Yahweh was there somewhere, guiding everything and everyone. Yet there was nothing in the world’s carnage, inequity, starvation, war, and control governments to suggest that Allah’s smiling face shined upon us. What perfect Creator could allow all this?

So I naturally deduced that it was a crock of shit, and that folks worldwide were being conned into subservience, mental control, and poverty because they were afraid of death, and therefore Life. The men running this con, it seemed, commanded endless material wealth while countless believers starved, or lived in squalor, even if their spiritual figureheads were penniless!

Well…screw that, I reasoned. I was no dupe. I was going to build my intellect, as I was taught to, and let today’s proven God, Science, guide my future’s dreams for humanity. Mysticism was for suckers, and useless, on this chaotic planet. Thought and worldly knowledge…King. I was a total Muggle.

Ahhh….the best laid plans (and believe you me, I had them figured out until the worms lunched upon my decaying form). The beautiful illusions of control and certainty.

The Tao, it seems, had other designs for me.

Hallef-inglulleah and thank Christ-Buddha-Krishna-Melchizedek-Elohim! Thank all Goddesses and Dumbledore to boot!

Sometime during the second semester of my second year of college, I had an awakening so huge, a spiritual experience so vast, that I not only believed, not only had faith, but KNEW beyond all doubt forever that God/Source existed, loved us all unconditionally, and barely resembled what humanity thought She/He was. Ditto for the Divine Sons and Daughters who throughout history, and every culture, have taught through example and Word how to relate to this mysterious yet omniscient, omnipotent, and omnipresent Parent. I’d never been so happy to be so incredibly wrong in my short life.

For the following ten years, my life resembled an incredibly bizarre adventure, and nothing what I thought it would be like. The spiritual revelations I’ve had, abilities that I’ve come to develop, and informational resources I’ve discovered and experimented with have been beyond what my wildest imagination could have summoned. I’m going to lay it all out for you, just as I had discovered them, in the book you’re holding (or the digital pirated version you downloaded from Torrentz;-).

It’s your birthright to know about this stuff, and I won’t hold anything back from you about the experience I had. My approaches to the deepening connection with my Spirit have been fairly meticulous, and would have loved a book like this one at the beginning of my path, to test what it proposes for myself. Open-minded skepticism is healthy, I’ve found, as long as it doesn’t suffocate the will to explore and childlike ability to savor and enjoy the process of discovery.

I name the book What The F---! for this very reason; because I’ve said that very American phrase so many times in the last ten years during this process, and so will your reasoning mind, I imagine. It’s precisely because we’ve identified who we are with our linear left-brain, that it gets perpetually amazed with what the right-brain and heart (multi-dimensional, intuitive information) can access when focused upon. I’m pretty sure you’ll say WTF! a few times as well.

This is a story of awakening to the realities of Spirit and what might happen while racing down the rabbit hole of weirdness called modern metaphysics (physics of love). How could a person become an energy-healing evangelist after being a left-brained, sophistry-drenched atheist? It happened to me, my friend.

The awakening arrived in an unexpected instant, but what also surprised me were the many bizarre events, grace-filled miracles, and education that followed for almost a decade.

So here’s what happened…

“This book is fantastic!

I thoroughly enjoyed reading it and feel that it will help many people. Although our individual journeys in life are completely unique and in fact Self-Designed, there are many helpful signposts that you can encounter on the way if you simply ask for them! This book can be one of those for you.

A captivating and amusing rollicking read!

Thanks for the very generous and loving portrayal of the Matrix Energetics experience!”

Joshua Ramay is an energy healer in San Diego, California. Following a spiritual awakening, Joshua’s driving passion in life and healing philosophy have revolved around energy—not simply the fabric and expression of all reality but also the entirety of our experience as beings of love and light.