Pebbles of the Holy Stream 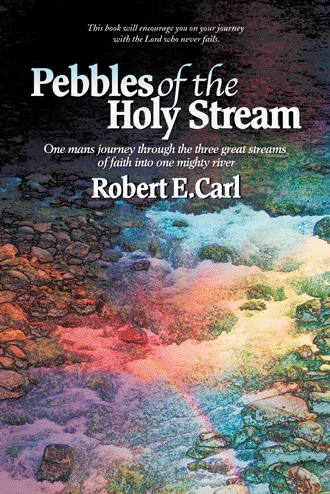 My mind went on, back to when I was in the county jail awaiting trial at the age of eighteen for the illegal possession of marijuana. I had found a book positioned under a leg of the bed to keep it from rocking, it was called Good News for Modern Man. I felt strangely warm and kind of high when I read it, it made me want to pray and talk about it to my cellmate. And then there were those jailhouse preachers who came on Sunday to preach hell fire and condemnation and ask us to come to the altar to lay our lives down and repent of our sinful ways. There were bars and no altar that I could see. I had got saved each time they came. I raised my hand and they prayed for me. I needed all the help I could get. I was in jail and facing a maximum of twenty years. (Possession at this time in Maryland was still a felony. What I didn’t know at the time was that state legislators had already voted to make it a misdemeanor, which would go into effect two months after I was convicted for being a felon.) That’s what I got for throwing myself on the courts mercy without a lawyer and pleading guilty. I had been asked by a secret admirer who called me and said her friend had just gotten back from Nam and wanted some good weed if I could help her help him. I being the kind of guy who was always willing to be helpful, gave a lid to her friend. He paid me back (after I argued with him that he didn’t need to after what he had just been through being in Viet Nam and all) for what I had spent, $5.00, and turned out to be a rookie policeman with a fake mustache he kept pushing back against his lip, undercover, hungry for publicity. He got it and so did I, eighteen months!

But I wasn’t getting what my pursuant was doing, who was still standing with me on the corner, when my mind had wandered.

“Yeah, I am a Christian,” I had found my lips saying.

“Do you read the Bible,” she implored holding a big black book out at me as if it were a platter.

“Yeah, we read it. We get stoned and read Revelation,” I said trying to sound cool yet increasingly feeling awkward and stupid. I moved stumbling away from her as she followed.

“Look there is a coffee house just down the street and a great band is going to be playing tonight, Wilson McKinley, why don’t you come,” she requested.

“Yeah, yeah maybe we’ll do that, I am with a bunch of guys. I’ll see if they might want to do that,” I said trying to placate her and make my exit gracefully.

“Jesus loves you,” were her final words to me as I waved, turned and walked away. Those words echoed in my head, how could he “love me”. Love was the buzz word of the day; “Peace and Love” were going to change the world. In fact it was so real to us that some simply called it “The Movement”. The Beatles sang about it, and we were all about it at our festivals, we even had a summer of love – “if you’re going to San Francisco be sure to wear some flowers in your hair…” huh?

Needless to say we felt a lot of “love” for the Jesus People as we were leaving Spokane with more drugs and less money in our pockets than we had hoped to come back with. The trip back to Othello took about an hour and a half and the conversation was riddled with how we could eliminate the Jesus People. They were sending astronauts to the moon in those days, and we thought they could probably find room for some long-haired freaky people with Bibles, or as someone even suggested we could just all get some guns and blow their heads off – “all you need is love” the radio played. Love, there was that word again, Jesus loved me – what did that mean? When we got home Keith, who was my sister’s boyfriend and the one who was really peddling the dope, had bought it and wanted our help to “unload it” (of course being the helpful person that I was) I had agreed until I got bummed out over the talk about blowing people’s heads off and all. So I decided I would just go for a walk when Keith came running after me and grabbed my arm and said, “Where are you going?”

“We have a lot of drugs why don’t we just do them up?”

I pulled away. “Na, I’m not in the mood,” I said truthfully.

Then he said with a knowing look, as the grin got wider and more sarcastic, “I bet I know where you are going.”

“You’re going to see that Jesus Freak, Steve,” he added grabbing me again.

Steve had been a friend of mine, back when we both worked in a local restaurant. He was a wonderful guitar player and could play more like Jimi Hendrix than anyone I had ever known. But he had always been a depressed, melancholy person who liked being alone. Recently, he had written me a letter; in it he had explained how he had turned his life over to the Lord Jesus and how the Lord had placed me upon his heart. He wrote that God had a plan for my life if I only would give Him a chance. Up to that point I hadn’t thought about it. Steve Anderson had recently become a Christian, and he was inviting me to get to know the Lord as well.

Keith grabbed me again, harder, which made me mad and glared at me and said, “I did my Jesus thing in California last year and there is nothing to it.”

I jerked away and said, “I think I will go see Steve.” I turned and headed down the street.

That was one of the last times I talked to Keith. He was found weeks later with a bullet in his head. He was trying to score some grass and for two hundred dollars he had been killed, shot in the back of the head execution style. I have often thought about that portion of scripture from 1 John 5:16 “…There is a sin leading to death.” And that sin is when we reach the place where we completely reject the Holy Spirit’s work in our lives to lead us to God through the acceptance of Jesus Christ. Keith had certainly made his decisive rejection; there was no need for his name to remain in the Fathers book of life.

When you feel like all is lost and you’ve lost your map, that’s when your helplessness can become His gracefulness. His purpose is not in the goal but in the process of getting there.

Fr. Rob serves as a priest at the Church of the Good Shepherd in Catonsville, Maryland, a suburb of Baltimore.

He is the author of The Anamnesis Affect

He and his wife, Meg, live with their dog, Cocoa, on Maryland’s eastern shore, where they enjoy reading, teaching, and kayaking.

His story is a story of failure and faith and the sovereignty of grace on one’s life as it flows.