Notes To My Daughter

A Story of Bonds So Strong, They Cannot Be Broken, Even In Death 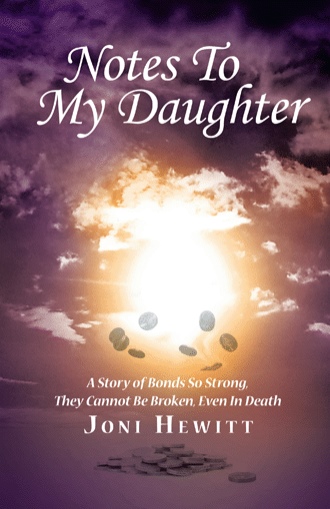 Monday, August tenth arrived and the house was full of people. Many of Kelly’s friends were there and my niece, Angie, had flown in from Dallas to see Kelly one more time. Angie was going to take Kelly’s cat, Oliver, home with her. Kelly loved that cat. He was a big, fluffy Maine Coon, all black with big copper eyes, and he would curl up next to Kelly to sleep each night. Everyone gathered in the dining room at one point looking through old pictures of Kelly that were spread across the table, and I was alone in the room with my daughter. I held Kelly’s hand and I whispered in her ear, “It’s okay to let go. Gram is waiting for you.” I just knew that she was. I swear I could feel Gram’s presence there, right next to me. I could feel her arms around me, surrounding both Kelly and me with her love. It had to be her giving me strength because I don’t know where else it could have been coming from. Again, I leaned close and whispered to Kelly, “Please leave me some dimes.” Kelly’s friend, Ashley, walked into the room at that moment and I stepped out to call the nurse. A minute after I left the room, Ashley frantically called me back. I flew from the kitchen to that bedroom as if on wings.

Kelly didn’t make it to the beach house with us. After three months of hell, going in and out of the hospital trying to get relief from the excruciating pain, Kelly passed from this earth. It was 3:50 P.M. when I watched her take her last breath. I knew the exact time because for some reason, I looked over at the clock on her nightstand. I don’t know why I did that, but then I turned to see all the faces of the people crowded around the foot of her bed. They were all staring back at me, their eyes wide and full of disbelief. I looked back at Kelly. She was still. A wail escaped from my throat, from every pore in my body, and I collapsed over the lifeless vessel that had once held the soul of my daughter. Kelly was no longer there. This was a pain I never knew could exist. I cried like a wounded animal, helpless and alone. I was powerless to stop it. The crowd silently filed from the room, closing the door behind them. Everyone instinctively knew that I needed to be left alone with my daughter. All my strength was gone. I stayed there with Kelly and wept for a very long time.

…The very next day, I received my first dime. I had just washed a load of laundry. The washer and dryer at the rental house were the small, apartment-sized units with the dryer stacked on top of the washer. The dryer was still spinning as I opened the door to take out the clothes, and the dime came flying out at me. I stood there staring down at the dime that I now held in my hand, wondering, could this really be from Kelly? I had asked her to leave me dimes, but could it be? Had she really heard me and listened, or was this just a crazy coincidence? I put the dime in my pocket and didn’t say a word to anyone. It wasn’t long before more dimes began to appear.

The loss of a child brings with it an insurmountable pain. This is one mother’s incredible story of the loss of her own precious daughter and the pair’s ongoing relationship after the daughter’s death. The love shared between Joni and her daughter, Kelly, is so strong that it transcends the boundaries of this earth.

As Joni grieves, Kelly reaches from beyond the grave to help her go on living. Kelly listens and responds over and over again through signs and messages and doesn’t give up until she is certain her mother is going to be OK. With Kelly’s help, Joni is finally able to move forward.

Our journey doesn’t end when we leave the earthly plane. Kelly proves to her mom that we never really lose our loved ones; there truly is a heaven. We will see them again.

Joni Hewitt gained incredible insight into the afterlife after the death of her daughter. At her daughter's insistence from the other side, Hewitt has been compelled to share their story and spread the knowledge and promise that she was given.

Hewitt lives in Ventura County, California, with her husband of twenty-four years and their twelve-year-old daughter. They are also parents to four grown sons.