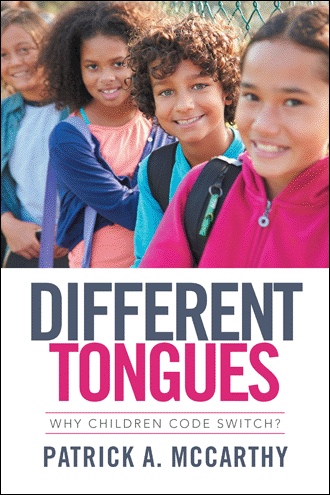 ABSTRACT This essay examines the general topic of child code-switching by primarily focusing on sociolinguistic variables that influence code-switching in a child’s speech. Three factors were discussed. First, it is claimed that parents play an important role in their child's speech by the strategies that they choose to influence their child's language development. In addition, a child's proficiency in either of the two languages that he is using can also have an influence on whether a child code switches. Finally, it was also found that contextual situations could have a strong impact on a child's code switching. ¬¬¬¬1.0 CHAPTER ONE: RESEARCH PROBLEM AND RATIONALE 1.1 The Research Problem Research pertaining to code-switching, both among children and adults, has been relatively neglected by linguists and sociolinguists alike. In fact, “there is a dearth of empirical research published that focuses on code-switching” (Bokhorst-Heng & Caleon, 2009, p. 237). This neglect is unfortunate because code-switching is an “intrinsic part of a bilingual child’s language development” (Tokuhama-Espinosa, 2003, p. 133). Further, the increasing impact of globalization on communication makes research in the area of code-switching very relevant. Blom and Gumperz (1972) were among the first to describe code-switching as a “discourse strategy” rather than as an indicator of mental confusion. Yet, the lay public continues to doubt that code-switching is the outcome of specific linguistic rules and constraints, that it is neither haphazard, nor an indicator of linguistic incompetence (Grosjean, 2010; Milroy & Muysken, 1995; Tokuhama-Espinosa, 2003). Both De Houwer (1995) and Lanza (1997) emphasize the paramount importance of studying how bilingual children learn to code-switch from a sociolinguistic viewpoint. This study responds to their emphasis. The focus of this present study will be to investigate the sociolinguistic factors that predispose, influence, or even compel a child to code-switch. The research question, then, is the following: Which sociolinguistic factors determine whether or to what extent a child code-switches? 3.0 Chapter Three: Why Do Children Code-switch? Tokuhama-Espinosa (2003) claims that code-switching is an “intrinsic part of a bilingual child’s language development” (p. 133). Further, Herdia and Altarriba (2001) contend that there are specific explanations to account for code-switching. In fact, they view alternating between two languages, as a means for bilinguals to be better understood. In the literature on child language development, several factors that can affect code-switching have been identified (Blom & Gumperz, 1972; Lanza, 2009; McClure, 1981; Song, 2007). In the scope of this essay, three important factors that influence code-switching in young children will be discussed. 3.1 Parental Discourse Strategies Lanza (1992) was the first to illustrate an importance to what is meant by discourse strategies, and the role that they play in bilingual language development. De Houwer (2009) states that "parents' ideas about which language they want their children to speak to them, or about the use of mixed utterances, are related to the attitudes regarding a particular language or the use of mixed utterances" (p.134). Further, she contends that these attitudes have a direct impact on discourse strategies that parents choose to use with their bilingual children. In fact, De Houwer (2009) defines discourse strategies to be "conversational patterns that express the speaker's wishes and expectations regarding language choice" (p.134). She explains that discourse strategies are known to have an effect on whether a child uses or not a particular language. Dopke (1992) describes a study of six Australian families whose children were learning English and German. In each family, there was one parent who spoke German, and this was seen as the minority language. One aspect of her study focuses on six strategies that the German-speaking parent used when their child did not speak in the appropriate language.

“Different Tongues” (Why Children Code Switch?) is a valuable book that gives us answers to endless questions that we have as parents who wish to raise bilingual children: Will teaching the child two languages end up with the child not speaking any language clearly? What role do parents play in controlling their children’s code switching? When children switch languages when speaking, should this be seen as meaningful, insightful or not to be tolerated? Does where I live have an impact on how my children code switch? ; The father is the only one who speaks the minority language, is this enough input for the child to be brought up bilingually. These questions and many others that parents are faced with are discussed in this book. Actually, “Different Tongues (Why Children Code Switch?)” proved quite valuable to me when I began my own family. I was an Anglophone married to a French Quebecer and I lived in Quebec Canada, which is French. I was the only English speaking person in my children’s lives for the first five years of their lives, so I was not sure if bilingualism was feasible for our family since I spoke the minority language. In fact, this book has enabled me to understand how children learn two languages at the same time; how children may mix their languages in the early years, but soon after this stage, the child begins to code switch, within his two languages, in meaningful ways. “Different Tongues (Why Children Code Switch?)” gives a new perspective on children’s code switching in today’s world. In the past, it was seen as inherently bad, whereas in this book, it shows how a child can now use code switching to more clearly transmit his language, as a contextualization tactic; and this is now seen as a clear advantage that the child possesses as compared to others who are not bilingual. In fact, this “advantage” is definitely a paradigm shift for today’s parents when it comes to their children’s code switching. Patrick McCarthy has contributed to the literature on bilingual development by providing an excellent overview of issues surrounding code-switching in young children. As his book points out, code-switching is normal behavior in children exposed to two or more languages, as it is in adults. Parents and teachers will find useful information about children’s bilingual development in this book. –Kirsten Hummel Professor Director in charge of the Bachelor of Teaching English Second Language Université Laval Québec G1V 0A6

Patrick A. McCarthy has been an ESL language teacher for more than 20 years. He has taught at the elementary, collegial and equally at the university level. He has just recently completed his Masters in Teaching Languages in 2013. He lives in Quebec, Canada with his wife, and three daughters.