The Darien Chronicles: Objects for Reflection, A journey into Love

Part One - In The Beginning 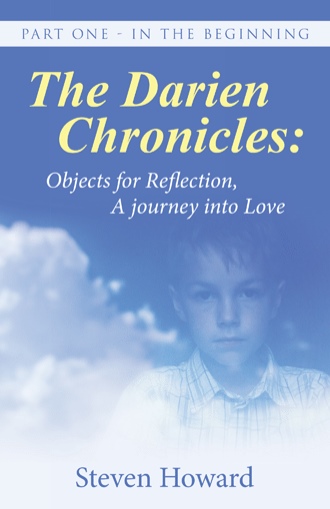 Late spring rains, added to the melting snow from higher ground, had turned the normally placid stream into a rushing brook that was now at least four feet wide and looked very deep to Darien. He watched, mesmerized by the force of the water as it propelled small branches and other forest debris downstream. Deep water kept him from going closer. He could appreciate the sounds from a safe distance, he thought, but his resolve did not last long.

Darien crouched down, his short legs spread wide for better balance and his forearms resting across his knees. He stretched his neck up as high as he could to see over the embankment of the brook. Patches of Trillium and tall weeds blocked his vision. He turned around and briefly looked back in the direction of the house. Good! No sign of Mrs. Edwards.  He returned his attention to the tumbling waters and inched his way a little closer, pushing aside the foliage until he had a clear view.

He scrutinized all the activity in the stream. There, in an isolated area of relatively still water, he spotted a school of minnow. He clapped his hands together and giggled, as he watched them dart to the surface and then disappear back into the lower depths of the pool. A strange-looking insect, with elongated legs, skimmed across the surface of the water and was gone in an instant, swallowed up by a minnow large enough to splash the water as it snapped up the feast and dove to the bottom.

Feeling a little braver, Darien edged even closer until his feet were nearly at the water line. He reached over to one side and picked up a dried branch, no more than two feet long. He broke off most of the smaller branches, creating a makeshift walking stick. Darien evaluated his handiwork. Maybe this is what the Indians did a long time ago. Right here where I am now.

He leaned over and looked down, marveling at his own reflection, distorted though it was by the rippling waters. He poked the stick down into the stream and laughed at the sight of the tiny minnow, darting off in all directions to avoid the ragged point. He strained forward, bending over the water to get closer to the underwater activity. He felt his weight shift abruptly and he cried out, as he pitched forward, his hands flailing in front of him.  He tried with all his might to regain his balance, but it was too late.  He raised both arms out in front of him, hoping to break his fall into the water.  His hands broke through the surface of the water and he opened his mouth to scream.

Suddenly, he felt an invisible force lift him from his fall into the moving waters, catapulting him back up into the air and onto solid ground. His landing was gentle, as if the force had carried him up and then set him down. Darien struggled to his feet and looked around in a daze, unable to comprehend what had just occurred.

A voice came out of nowhere. “You are safe now, Darien.”  It resonated, as if amplified by a megaphone.

He turned around, almost losing his balance again, as he searched for its source behind him. It sounded like it came from the area of the clearing, but he saw no one.

And then he looked up and let out a gasp. There, hovering in the air near the top of a boulder, by the clearing, was a man with olive complexion and jet-black hair, pulled back. He bore a trimmed mustache and goatee and was dressed in a robe.

The man’s garment had long, elegant sleeves that hung almost to the ground where the rest of the material flowed down, covering his feet. The iridescent fabric, in its vibrant blue, green and orange-red hues, shimmered in the sunlight. Golden threads, woven through it, created a design, one Darien could not quite make out.

Had the man not been so magnificently dressed, like some kind of very special prince, Darien would have been frightened, but he wasn’t. Instead, he felt drawn into a state of pure wonder. The man on the ceiling!  He recalled the vague, shimmering image he’d seen that first afternoon of this most recent stay with the Edwards. Still, he was in shock, unable to speak.

Almost as if knowing this, the man crossed his hands at his chest and bowed slightly before he spoke again. “I am Sundeep and I’ve come to serve and guide you.”  He grinned and then leaped, effortlessly, as if in slow motion, down from the top of the boulder to within a few feet of where Darien was standing.

Darien remained silent, unable to believe his eyes. Who is this man? A magician?  Or a friend of Billie’s, dressed up as a trick to fool him?  He continued to stare, cocking his head to one side and then the other as he looked for something that would give it away as a prank.

He knows what I’m thinking, like Mrs. Edwards does.

“You’re right, Darien. I do read your mind, just like your mother does when you don’t voice your own thoughts.”  The man who called himself Sundeep smiled with eyes that soothed Darien, somewhere deep inside, like the softness of lips brushing across his forehead. Gathering up the many folds of his robe, Sundeep gently lowered himself to the ground, ending up with his legs crossed beneath him.

He repeated what he’d said moments earlier. “I’ve been chosen to work with you. I’m always available.”

“Is this some kind of trick of Billie’s?”

“No, Darien, not a trick. I saw the danger you couldn’t see and came to protect you.”

Darien considered this for a moment. He was finding it hard to understand what had happened. He knew he had lost his balance and had nearly fallen into the water, but his memory of what happened next was blurred. Only a vague sense of having been wrapped in some invisible arms and safely swooped back up onto the ground. How’d he do that?

“I’ve been at your side since before you were born, watching over you, my Gifted One.”

Gifted one?  Darien turned all around but saw no one else there but Sundeep. He wrinkled his eyebrows and glanced back at this wondrous form before him.

“I’m speaking of you, Darien. Your name means many things and one of them is The Gift. One day you will know just what a gift you are and you will rise up and shine with a light so brilliant, my robe will seem pale by comparison.”  Sundeep clasped his hands together, in front of his face, and rocked, silently, his eyes closed.

The words of the stranger who called himself Sundeep were beyond Darien’s ability to understand.

“I never seen you before.”

“You saw me the day you arrived here for the final time. Just before you went to sleep.”

He didn’t know what Sundeep meant by final time, but he remembered the glowing image he’d seen in his room the day of his arrival over a month ago. But that didn’t look like a person, he thought but didn’t say.

“I didn’t want to frighten you any more than I did, so I didn’t fully materialize.”

Take a journey with Darien and his spirit guide, Sundeep, from pre-birth into the after-life. In The Darien Chronicles: Object for Reflection, A Journey into Love, Part One –In the Beginning, walk with him as he leaves behind vague recollections of being a cast off and develops his rules for survival in the drama of an adoptive family where secrets thrive. Be with him as he struggles to separate truth from fiction and find his own soul. Is Sundeep real or imaginary? Is Darien who he is seen to be or is there more to who he is? Who can he trust? The appearance of things suggests no one, as he cautiously formulates a plan to fit in and be accepted. Circumstances bring Darien, a four-year old boy, into a working class family that includes an older boy whose friend causes him to question himself and shakes his very foundation as a boy wanting, desperately, to become a man. Being a bastard boy and child of a trollop, Darien finds refuge and a reflection of who he is in his secret friend, Sundeep. But does he believe what he hears? Or do the other influences and experiences he encounters speak louder to him? Find out. Perhaps you’ll even find yourself in this story. And this is just the beginning!

Steven Howard has a master’s degree from the school of hard knocks---having journeyed through despair and addiction into recovery. His personal, inner journey took him through rejections, failures and a dark, circuitous route as he sought to discover the Truth. Unknowingly guided by a Divine Force, the way was made clear through the support of a 12-step recovery program, years of therapy and yet more years as a student of metaphysical teachings. He has a master’s in Counseling psychology and over forty years as a student and teacher of metaphysical teachings. He lives with his wife, Paula, in Central Florida.