Killing Us … His Way

Through the Sinister Web of Domestic Abuse 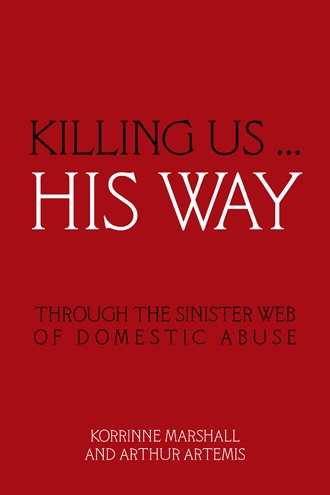 As a child, Korrinne Marshall wished that the man who continually hurt her would die. As she was forced to play games with the monster in a dark shed, young Korrinne did her best to rise above the reality that had become her life. But what she did not realize is that decades later, a choice would lead her to hell and back as she entered a relationship with a partner who harbored heinous secrets and held the power to end her life. Would she ever be able to escape the cycle of abuse? Arthur Artemis never had to confront an uncontrollable monster—until his beloved sister was murdered by her husband. As he set out on a quest to learn how and why domestic abuse victims survive, Arthur reveals how his quest to find answers led him to Korrinne and her extraordinary story of endurance that eventually led him to gain life-changing insight into abusers, their victims, and the brave survivors who emerge from the darkness to live again. Killing Us … His Way shares the compelling story based on true events of two people destined to meet as they embark on a healing journey together to confront the shadow cast by domestic violence.

Korrinne Marshall has worked in education as a teacher and leader for thirty years. She is a mother of three humans and several fur babies, and has a passion for lifelong learning and spiritual growth. Arthur Artemis is a businessman who bravely faced great personal obstacles after his sister was murdered.