and Words of Spirit Wisdom 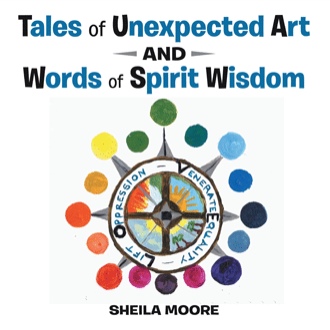 If our personality survives then it is strictly logical and scientific to assume that it retains memory, intellect, and other faculties: and knowledge that we acquire on this earth. Therefore, if personality exists after what we call death, it is reasonable to conclude that those who leave this earth would like to communicate with those they have left here.

I am inclined to believe that our personality hereafter will be able to affect matter. If this reasoning be correct, then, if we can evolve an instrument so delicate as to be affected, moved, or manipulated by our personality as it survives in the next life, such an instrument when made available ought to record something.

When Thomas Edison made those remarks he was referring to recording machines, however, the same concept applies when the pen or the paintbrush are used to convey the words and pictures of a personality that has passed over. Like most people watching the recent distressing scenes of volcano eruptions and the terrorism taking place, I had questions running around in my head. The following thoughts were conveyed to me.

5.7.2015 Do not despair as time and tide wait for no man, forces beyond that known so far in your earth life, have yet to show. Mighty rumbling goes on beneath this earth of yours. Rocks from centuries past move and groan, so that their words are heard in the spitting of water and boiling of the waves.

As the seas rise and fall, as they must when these movements happen; some countries will appear to descend into oblivion, and others will rise, this is how it is. You humans think that you can control life on this planet for one or another of your belief systems. This is not so, regardless of your hopes and dreams: life will do what it must.

This is a strange way to start a book about the influence of Spirit in Art and Communication; however, I have used it as an example of the way in which the influence I call ‘Spirit’ talks to me, and the full communication can be read later.

My interpretation of the God Source is loving intelligence that is universal, and represents the good within any form of religion; and as far as the Spirit World is concerned their influence is with me all the time; and I feel that science is coming closer to proving that existence is eternal through the study of particles and energy.

With regard to the artwork that I (and most other Psychic/Spiritual artists) do, there are several ways in which this is brought through. If I am working publicly it will be in the form of a portrait, I will not know who I am drawing until the picture is almost finished. I start with a blank sheet of paper in front of me, and the image builds as the pencil moves. It may well be that another influence talks to me in my head as I draw, and although this may sound strange it works well, because my attention is diverted by the words in my head whilst my pencil moves as it needs to. Another way to work publicly is to stand with an easel and a large drawing surface, so that many can see what is happening. This type of work is usually done with pastels. Yet another way is to have the work in progress showing up on a large screen whilst the artist sits and draws, this is suitable when working in a large hall or theatre.

Further images emerge when a spirit influence wants me to draw or paint them, and make themselves known to me, in that case I may see them in my head: I may draw them several times, and I will feel that I can’t rest until I have completed the picture. This can happen when someone has just passed over and they want their family to know they are OK, or if there is a special message for some reason.

If the artist has had some professional training the pictures may appear more defined: but anyone doing their art through Spirit will find the correct way for themselves, and those that work through them. Anyone can be inspired to do this and find their own expression, and there are many different and wonderful ways in which other spiritual artists work.

‘As you show an interest in a subject your mind is sending out thoughts. These thoughts are like little dancing sprites that move and service the space around you. As those thoughts expand they are attracted to sprites from the past that are dancing to the same tune. So they combine and dance together, and the more you expand your thoughts the larger the scale of partnership becomes.

So your thoughts blend with other thoughts from the past and return to you with their information. Then you can act, enlarge on your thoughts, and this is how your contacts build. Once that blend has happened it is always available if wanted, and just as you can call to these contacts, so they can call to you.

Sound out your ideas and thoughts, keep wondering, hoping and thinking and frequencies will blend.’

Let our thoughts all blend towards tolerance and peace.

Sheila Moore has been involved in Spiritual Events for the last 40 years. Much of it involved a form of art called ‘Psychic /Spiritual Art’ and also the study of the effects of colour on living things. More recently having moved to Norfolk UK the study of Trance Mediumship with a group called ‘The Spiritual Development School’ has brought about a more exciting form of art. This involves feeling a necessity to paint a portrait or picture, sometimes from long past. The research is usually on the internet and their story gives us an idea why they want to come through to us. Some pictures have carried a theme which has proved to be relevant to modern events. Tolerance – Compassion – Care for the Earth.

She has been involved with Spiritual healing Groups since 1994, some of those involved with colour healing; there has also been a strong interest in Animal Communication and healing from a distance.

She has only spoken of her own experiences, or those that have been experienced by someone known to her. Because all the artwork she talks about was instigated by someone, or something other than herself, she has called it ‘Unexpected Art.’

Sheila Moore is a British medium and Psychic/Spiritual artist working with pictures and inspirational words channeled over many years. She is very fond of animals and has in the past written many articles and a small book about dogs but now concentrates on Spiritual work.