From Baggage to Balance

by The Adam Channel 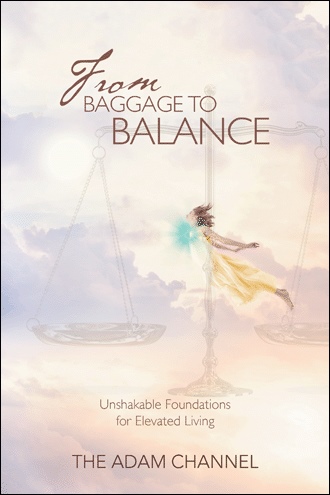 “It is better to conquer yourself than to win a thousand battles. Then the victory is yours. It cannot be taken from you, not by angels or demons, heaven or hell.” ~ Buddha What did Buddha mean in his famous quote above? How do you go about conquering yourself to become impervious to both angels and Demons? What is this space of victory that is beyond either, and why would the angels be included in this quote, not just the demons? Were the demons not the bad ones and the angels the good ones? In my own journey these were once all questions I would often ponder on late into the night as I tried hard to be pure, and balanced but realised that beneath my calm exterior there was a still a battle taking place underneath. There was still darkness that I could not seem to shift no matter what I did, and the harder I would try the worse it seemed to get. The darkness in me repulsed me, to feel something in me, impure and twisted in going against who I thought I should be in my identity as a coach and a healer. I wanted to know if I should resist and reject these thoughts as something outside of me, as my enemy that I needed to fight or avoid, or if I should try to own these parts and love myself for whoever I was, be that an angel or demon… I knew at times if I were honest with myself that I seemed to resemble both through my thoughts. The problem was I was not honest with myself, and I did not accept the demons in me, nor could I step into the role of the angel and the light worker that I wished to be - at least in the way I fantasised it should be. However there came a point where I did get to where I wanted and beyond, it just wasn’t in the way I had expected. I learnt the secrets and found the answers to the questions I had been asking. I discovered where demons come from, how to tame them and how to embrace the light of love and angels within. I saw that festering in the darkness of the unknown, in the very deepest and darkest shadows of your consciousness, are your demons – lingering, out of touch from the light of your love, your consciousness accepted, and therefore out of your control too. Separated you hold them from you, disassociating and disowning, but are they really that separate to you, the demons within? They are found within every being, dwelling in the darkest parts of you, darker even more so than the caves of your fears, for it is the shadows cast from those caves which gives birth to what we come to call, “the demonic”. What if these places of the deep dark disowned really did exist within each individual? What if you knew in your heart this were true but were still unable speak it or acknowledge it? What are so many people so afraid of that they cannot seem to openly acknowledge the darkness within them? Is it perhaps the judgement from others? Or will they judge themselves? Or perhaps there is something else, something deeper which resists embracing the whole of who or perhaps “what” you are.

At the airport, when you exceed the baggage weight limit, you’ll be forced to stop your journey. Eventually, you’ll pay an unwanted charge, which can dampen your experience. This is the same in life. If you are ascending, travel lightly, and balance the things you want to take with you. In From Baggage to Balance, author The Adam Channel offers a path to help you balance your life. The Adam Channel introduces the Divine Scale, a unique system using a set of tools designed for finding inner-world balance by identifying five key destructive behaviors that sit at the root of emotional pain and frustration. The system teaches what you can do to achieve balance through practical and simple steps that can be integrated into even the busiest of lifestyles. Making small daily choices from the space of balance assists you in aligning yourself with your heart center and universal flow. Offering empowerment and hope in place of grim despair, From Baggage to Balance helps you explore your imbalanced behaviors, perceptions, and actions to guide you to living in balance.

The Adam Channel, formerly known as Adam Frewer, changed his name after opening as a cosmic channel during his eight-month pilgrimage through Mexico between 2015-2016. He was a top coach and healer in London and was known for his clients’ transformations and stories of angelic encounters. After his rebirth, his capacity for deep healings mysteriously increased.