The Promise of Surfing Rainbows Storybook 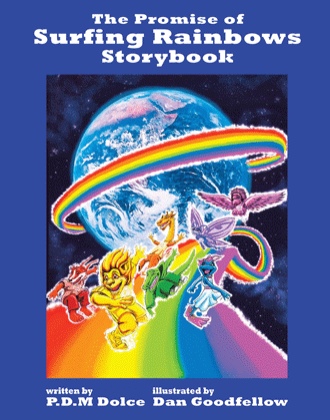 “That must be it!” gasped John, his heart pounding.

“There’s no way we can go in there!” exclaimed Maggie, staring straight ahead.

“’Course we can! Come on!” John replied as he raised the collar on his jacket to shield himself from the biting cold wind. They had used up their every last penny on the six hour bus ride to get this far and he was not about to give up now.

Wasting no time, he confidently stepped closer, pulling his sister firmly by the arm. It was their first time in the country, far away from the big city where they lived. They were searching for a new beginning and they were hopeful that they were about to find it.

Although the air was crisp, the sun was shining in the cloudless sky. Everything seemed brighter and cleaner in the country, so different from the dark, dingy street in the city where they lived with their parents.

That morning they had woken up in the pitch-black darkness to catch the 5 o’clock bus. Their Mum had prepared some tea but they had to share the last piece of toast. It was the end of the week and, as usual, the grocery money had run out.

They had begun this quest because John had been brave enough to contact the world-famous singer called Sophia Rose. They were trying to work out what makes a person successful and able to afford the finer things in life. So Maggie had dared John to contact the legendary performer, which was an easy task for him as he was always ready for an adventure.

Sophia Rose sat down on a comfy chair and was immediately joined by a ginger tomcat who curled up on her lap. “Please do sit down, I can see that you’re enjoying your snack,” she said with a gentle smile.

They chatted about the bus trip for a while as John reached for another cake. Maggie was terrified to ask the question they had come so far to ask, but as the clock on the wall chimed the hour John blurted out, “You started out poor like us. We don’t have a great talent like you do but we’re hoping that there must be a way for us to have a better life. We were wondering if you had any tips that could help us. How did you become so successful?”

“Ah! Well I found out about something quite amazing and from then on I always seemed to be in the right place at the right time.”

Sophia Rose looked deep into John and Maggie’s eyes as she continued her story. At her first singing lesson, the woman did something that was to change her life. The teacher gave her a book, a very special book called The Promise of Surfing Rainbows. At first, Sophia Rose thought the book was just about some enchanted creatures, but she soon grasped that it was actually packed full of very useful ancient wisdom.

“As soon as I started using it, things always seemed to work out well for me,” she said.

Maggie and John were both listening intently to Sophia Rose’s story but they were totally unprepared for what she said next.

Sophia Rose stepped forward towards the two large wooden doors that opened into the next room. The guests quickly glanced at each other and then scanned the large room ahead. The study was vast and full of leather bound books that neatly lined the polished shelving. Sophia Rose stepped to the side and said, “I wonder if you realize how significant this moment is both for you and for me…”

Speechless, they looked up at her, again not sure what to say. She held out her hand and beckoned them to come forward.

In the middle of the huge bookcase they saw a glass cabinet, and behind the glass was what they were looking for, the book called The Promise of Surfing Rainbows. They stared at it without moving.

The children heard the large doors close quietly behind them. They were on their own now. If they read this book, would they also have a successful life like Sophia Rose? If they were half as successful as she had been, they would be doing very well!

“Open it and see!” said Maggie as she gestured impatiently for him to sit on the couch by the window, so they could read it together.

As they sat down, they glanced out of the window and noticed that it had started raining. Through the droplets, the sun was still shining and a beautiful rainbow appeared in front of them.

“What a coincidence!” said John quietly as he slowly and respectfully opened the cover of the book, eager to find the treasure within the words on its pages. 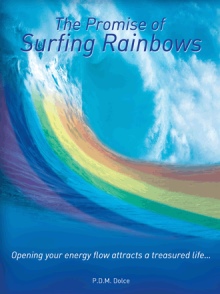 We are the Rainbow Surfers.

Come and join us on this amazing

adventure on the river of life!

If you are ready, the promise within

The Promise of Surfing Rainbows

is about to be revealed …

you how to attract the very best

that life has to offer!

Having spent until the age of thirty-two working in the wrong jobs, married to the wrong partner, driving the wrong car, and living the wrong life, I can categorically tell you that the wonderful message from Surfing Rainbows, that you can love your life and that you can live your dreams, is not only inspirational, it is also deadly accurate. As a young, working-class man, I was told by my peers that “people like us” do not become artists, they do not write books, and they certainly do not have films made about their lives.

I wrote my first book in a factory toilet where I was hired to sweep floors. My world was so small that I did not even know anyone that owned a typewriter. And yet that first book, Watch My Back, still went on to become a Sunday Times Best Seller and a BAFTA-winning film.

I am an ordinary person—let us have no doubt about that. So if I can attract an amazing life, I know that anyone can do it. I wish I’d have known about Surfing Rainbows way back when I started; it would have saved me a lot of time. I love this beautifully presented book. I love this inspirational message, and I highly recommend this work to anyone wanting to live a successful life.

P. D. M. Dolce is a penname for the coauthors. These authors have experienced the power of Surfing Rainbows, as the technique came to be called, and have therefore seen their lives significantly changed for the better.

It was several years ago when two people who otherwise had nothing in common met on a bus and struck up a conversation. One was a young English woman who wanted nothing more than to start a family of her own. The other was a successful American businessman who was soon to become a grandfather for the second time. They were from very different worlds. They began a conversation that has lasted for over a decade and over thousands of miles. Their dialogue was about life, and the result is The Promise of Surfing Rainbows. Both of them had read all the self-help books they could lay their hands on. As they shared information with each other, it became clear to them that as wonderful and helpful as those books had been, there might be something missing. They set about finding what that “something” could be and that was the gist of their transatlantic phone conversations over the years. After much discussion, trial and error, more reading, and more experiments, they pinpointed what is now being called, The Crucial Link. Once that happened and they applied the information to their lives, everything changed for them.

We know without a doubt the information contained in this book works because you are holding in your hands absolute proof that it does. You see, there is a key, a crucial link, that allows you to get whatever you want or desire in life deliberately, by design, and not by happenstance. And the book you are reading right now is the direct result of the authors applying Surfing Rainbows.

Our desire is the same for you. We want you to know how to Rainbow Surf too. Picture your life as a treasure hunt for unlimited treasures because life should be fun and exciting. And it can be!

This is the promise of Surfing Rainbows.