Becoming Who You Are with the Intelligence of Self

by Pierre Cauvin & With Genevieve Cailloux 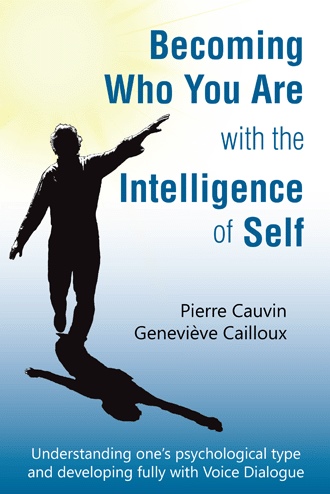 SELF-DEVELOPMENT WITH INTELLIGENCE: THE AWARE EGO

NEWS FLASH: The “sclerosis” or psychic fossilization is not inevitable. Two factors lead us in the opposite direction:

THE THREE LAWS OF CONSCIOUS EVOLUTION

Conscious development occurs according to three laws which are dynamic in nature; they are actions of the psyche, which are, if not always conscious, at least explicit. For this reason, we will use verbs to indicate them:

Until we can name the things that surround us, and the things that happen within us, we have no way of understanding or acting. This is as true in the world of the psyche as it is in all other areas of knowledge; nothing is possible if we cannot perceive, identify, and name what makes us act, both consciously and unconsciously.

It is such a fundamental truth that if we hadn’t put this principle into actual practice, we would never have come this far. We would have no way to share and exchange ideas. In other words, the first step of development consists of identifying how we function and mapping out one’s own psyche.

The difficulty with the Operating Ego is not in what it knows how to do; it does some things very well, and we would never dream of preventing it from pursuing a particular course of action. The difficulty is that it wants to do everything, or even more directly, it puts itself in our place – the Auto-Pilot mistakes itself for us. When we say “I” (for example “I’m like this or I’m like that..., I like this or that.., I don’t like this or that...”) with force and conviction, it’s not us speaking. It is rather that, unknown to us, our Auto-Pilot has moved in and taken control.

At this point, we need to dissociate the “Aware Ego” from the “Operating Ego”; we need to make our manual controls accessible and not always be operating in automatic mode. We need to discover if there really is a pilot in the plane or if, as in A Space Odyssey 2001 (Clarke/Kubrick†), Hal the computer is going to hijack the controls!

Dissociation is undoubtedly the most difficult part of self-development, but it is also the key stage. It can require strong methods and provoke very intense emotions.

Integrating and Rebalancing the Opposites

At this stage, we have created space to gradually integrate the opposite pole. Our goal is not to struggle and develop one pole to the detriment of the other; nor do we want to exercise the opposite pole in some type of psychic “mind building” similar to “body building”. Once the Operating Ego has loosened its grip and let go a little, some space opens up for the opposite pole. I can finally put a hand on each shoulder and “embrace the opposites” rather than be pulled every which way on an inner battlefield.

From this time onward, I can no longer project onto others what I deny in myself; I can no longer hold others responsible for what belongs to me. I start by identifying what arises in me before I blame someone else. And even more importantly: I consider those who irritate me as someone doing a good deed, because they point out clearly what I still have to learn. In fact, we should set up an altar or statues of those who bother us: they are the masters to whom we should pay homage.

This is truly a lifelong discipline, a permanent learning curve. No dodging the issue, no mask to hide behind; one question alone to answer: “Right now, who in me is speaking, thinking, judging, taking action?” It makes us dream of a world in which all individuals would assume their share of responsibility and where anathema, excommunication, and fatwah would no longer be practised!

However, that doesn’t mean that everything is equal, that there is no good or evil; our capacity for discernment remains, and it is now even more effective since it is no longer tainted with our projections. Discernment is the role of the Aware Ego.

The intelligence of Self (TIOS) offers a new, dynamic and effective approach to personal development. Designed to offer readers the opportunity to use a refined typological tool to learn their current default position on their psychological roadmap, and consciously integrate disowned or undeveloped aspects of their personality, creating internal balance, peace harmony and joy for their future.

This approach enables us to:

get a snapshot of the map of our existing psyche.

better understand our routine habits and truly get to know ourselves

discover what lies hidden within each of us and integrate our disowned parts.

live our life fully at each of its different phases.

establish and maintain better relationships with ourselves and others

Whether undertaken in a self-coaching format, by an individual or used by human resources professionals, consultants, coaches, or therapists – this approach has proven to be effective, powerful and rewarding for individuals and corporations alike..

The case studies enclosed and the many illustrations will enable you to benefit rapidly by recognizing and developing your own strengths grounded in a solid Intelligence of Self… and Others.

In 2011 the authors received in San Francisco the ”Mary McCaulley Lifetime Achievement Award", which recognizes individuals who have made a significant contribution in encouraging the constructive use of differences identified by psychological type. In 2012, the training process for consultants, using the TIOS approach, was awarded the European Quality Award from the European Mentoring and Coaching Council.

International coaches, consultants, authors, Pierre Cauvin & Geneviève Cailloux have trained thousands of coaches in the typological approach, first with the MBTI®, then with their own questionnaire, the CCTI©. They have developped a new methodology "The Intelligence of Self" which combines Types and Voice Dialogue, allowing for conscious development of Self.