The Adventures of Karma Cat

A Story About Karma and Chakras 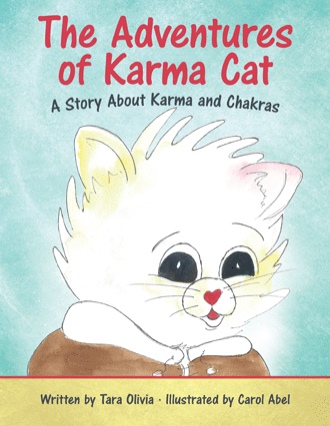 The Adventures of Karma Cat Sacral Chakra It was recess time at school, Jordan’s favorite part of the day. Jordan was in second grade and excellent at sports. He decided on this day that he would try to play basketball with some of the older boys on the bigger court! He walked over to the fourth and fifth grade courts. Luckily for Jordan they needed an extra player so he was able to join the game. It was hard, really hard. All of the boys were bigger and faster than Jordan so he played his hardest. He made a shot! Then another! Jordan was playing great and having so much fun, until the best player on the other team started to play extra rough against Jordan. Every time Jordan went for a shot the boy would just slap Jordan’s arm down and foul him. Finally the boy pushed Jordan down on the court during a play. As Jordan was down, frozen, the boy said, “You’re too small to play here. Go back to the baby playground.” Jordan just stayed down on the ground, feeling small and like a baby. He couldn’t get up, he was frozen. Insert Image 6 Then he saw Karma Cat standing by the court! Karma Cat was a beautiful vibrant orange. Jordan’s eyes met Karma Cat’s and the energy began to flow to fill Jordan. As their eyes connected Jordan felt Karma Cats energy and he felt a surge of power. The power was so strong that Jordan stood up and went back to join the game. Jordan went to his team and assured them that he was ready to help them win this game! He was ready. Jordan didn’t feel like a baby anymore. He felt strong and powerful. Jordan finished the game with the big kids. He made shots he had never made before. He even scored the winning shot! Jordan looked over at Karma Cat and gave him a thankful smile. Insert Image 7 From that day on Jordan played on the little playground and the big playground anytime he wanted. He knew that he had what it takes to be big and powerful. Before Karma Cat left he gave Jordan a vibrant orange stone to keep close when he needed some extra power! “I am powerful.”

Karma Cat is always there when you need him! Throughout this story, Karma Cat appears any time children find themselves in a situation where they feel powerless. This book journeys through seven different relatable scenarios. During each scenario, Karma Cat magically appears just in time. Karma Cat knows just how to deliver energy to each child by using the seven chakras. Our chakras are energy centers in the body that, when spinning and open, we feel powerful and balanced. When they are stuck like mud, we have trouble acting and deciding. With the help of Karma Cat and his magic, this book teaches children and parents how to use energy to calmly solve any situation we encounter. The stories focus on social issues such as relationships, bullying, self confidence, and danger. It explores dealing with emotions and what to do with those emotions. After reading this book, you may find that you and your child have discovered how to use one of the best kept secrets, which is the utilization of chakra energy. The development of presence, emotional control, and the ability to generate your own inner strength are results to expect after sharing this book with your child. The story begins when Siena is separated from her mommy in a busy store. She feels lost, powerless, and scared. Karma Cat arrives and helps her feel brave enough to call out and find her mommy. The stories continue on with a new student being teased, a difficult playground situation of bullying, sports and perseverance when trying out for a team, stranger danger, and even a little girl’s best friend moving away, leaving her alone. Enjoy these stories while discussing experiences your child may be having. Karma cat is always there waiting to help you and your child.

About the Author Tara Olivia holds her Master’s Degree in Special Education and has taught both children and adults. She currently lives in San Diego with her husband and four young children. Tara has been a practicing Reiki Master for seven years and has led meditations at a local yoga studio. When not building her Reiki practice, she is outdoors enjoying her family or being a busy mom of four. About the Illustrator Carol Abel is a retired educator and the proud grandmother of six wonderful children. Besides painting in watercolor, she likes to read, golf with her husband, and enjoys get togethers with her two children and their families. She enjoys living in Southern California.