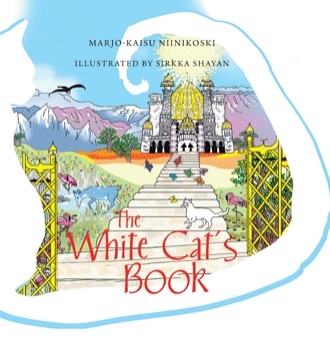 The bedroom was full of mirrors. One of them had been nailed beside the bed, to the wall that was decorated with old-fashioned wallpaper. I watched on, as each cat in his turn jumped onto the mirror table that was standing in the Mistress’ bedroom. They seemed to be amused by watching their own image in the mirror. “Oh, so this kind of plain faces we supposedly are,” the cats laughed out loud. “Goodness me, and cat's whiskers! The mirror is lying. It doesn’t have a clue as to who we really are.” Then it was my turn. With a trembling heart I climbed up the leg of the mirror table onto the tabletop. I had never seen myself in a mirror, so I didn’t know what to expect. “Okeydokey, you little gray mouse,” the cats toyed with me. “Now, look deep enough into the mirror and then you’ll know what you're made of.” I settled down with a stiff upper lip in front of the mirror and looked. I was shaking all over. It seemed as if the whole world had stopped. A beautiful white mouse, who glowed with wisdom, gentleness, intelligence, joy, and wit, stared back at me from the mirror. In amazement, I couldn’t get a word out of my mouth. “Who is that?” I squeaked. “Who is that?” At that moment the same presence, which I had experienced earlier in my own burrow, filled the room. I felt as if I had been filled from the inside out. Sweet peace descended upon me. I got a flash of what I really was like. “Do you understand now,” the white cat asked, “how wrong you have been about yourself? Your entire life you have lived as a prisoner of your own beliefs and thought you're just a worthless gray mouse. You have never seen yourself as you really are, because you have been afraid to let go of your smallness.” “The world is certainly not afraid of suffering,” the cat continued, “but it is afraid of love. It will not allow itself happiness, because the guilt of existence is gnawing at it and the fact that it believes it is separated from its Creator.” All three cats sat down behind me. Through the mirror, I also saw them to be pure light. The cats stated in unison, “If you knew how infinitely beautiful you are, you would never again condemn yourself or those around you. You would see in them only the grace and the greatness, which do not originate from your small ego, but from the Source, whose part and who you always are.” I kept staring into the mirror. I saw my whole life running in front of me as a strip of film, and I felt the need to erase the entire series of images out of my mind. “Forgive yourself,” the voice from inside the mirror suggested graciously, “because everything has already happened. There is no past and no future. There is only this moment, in which love is being extended.” “That really is the same voice that I heard in the burrow”, I concluded. “Can you now finally say, who are you?” I asked the voice. “When you remember who you are, you know who I am,” it replied. “The wise say - become yourself, but I say to you - first die to the Self. And then come back and live the normal life of a mouse. But from now on live without guilt and fear. “And remember that you are allowed to laugh at all this already.”

This is a storybook for adults. It is a gateway to another world, offering you a choice: do you want to have a dream that is not true or wake up to reality, where you can let go of your dream pictures?

The White Cat’s Book is a collection of spiritual fairy tales. It contains ten tales, connected by an adventurous white cat who appears now in the eastern lands, now in the tropics, and sometimes in homey rural settings. You might meet her at the fringes of a hot, sandy desert as well as in the ice-cold Antarctic.

Above all, the white cat goes out in search of adventures in the landscapes of the mind. Her message to you is, “You are what you think. By changing your mind, you change your life. And by giving up through real forgiveness of what you thought you were, you will wake up from your mind’s dream and find out who you really are.”

Marjo-Kaisu Niinikoski’s touching stories and Sirkka Shayan’s delicate illustrations will take you deep into the recesses of your mind, to a place where you can finally meet your true Self.

Marjo-Kaisu Niinikoski is a Finnish author, storyteller, journalist, life coach, and businesswoman. She currently lives in Finland, but she has travelled for long periods in India. She has also lived in France, and in the United Arab Emirates in the Persian Gulf region. Therefore, she is well familiar with Indian and Arab culture. In her inspirational writings, she is focusing on forgiveness, joy, and spiritual awakening.

Sirkka Shayan, a Finnish graphic artist, illustrator, translator, and author, has published several books. She currently lives in Finland, but she has lived abroad for thirty years, mostly in the United States, England, Italy, and Australia. She is also familiar with Persian culture.