Kathy, Wait For Me! 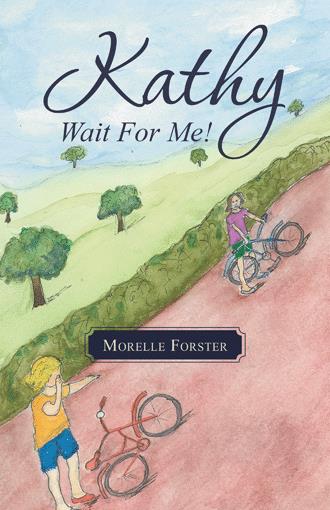 It had been a sheep worker’s cottage originally, one of a row of ten or twelve Victorian houses – a pleasing line of homes, adding to the impression that Glastonbury was still a market town. Paul opened the door onto a dishevelled sitting room. Kathy had guessed there would be disorder from the array of inappropriate items on the window sill she had seen from the outside. Rugs lay strewn across the floor and furniture, CDs and cheap books lying everywhere. Whisky and wine bottles, some half full, lay around; dirty dinner plates were piled up in one corner. There were ashes and cinders in the cold grate; a girl’s clothing adorned an old rocking chair; a bottle of washing up liquid and a half-full bottle of milk stood on the window sill. Inwardly, Kathy closed her eyes to the disorder, noticing how her spirits sank. On the floor near the centre of the room stood a music centre, and from this came the low sound of reggae on some radio channel. The soft, yellow light from the western sky poured into the front window, casting a warm, ameliorating glow on the disarray, and no doubt curdling the milk on the window sill. At the other end, through the back window, Kathy could see a small, neglected garden rise to a trellis fence, beyond which rose a steep hill in which grew a profusion of different species of trees. The shadowed eastern sky and the thick autumn foliage set a gloom over that part of the room. She stood in the warmer half of the room, in the light, and looked expectantly at Paul.................

They were taking tea together, sipped out of cracked china mugs, when Paul’s mother arrived. The door was opened with too much strength, and, in a gust of wind, a large, colourfully-dressed woman burst into the sitting room. Her thick, wavy, golden hair was cut in an untidy bob, and swept back from her broad, smooth forehead; her hazel eyes were merry and well-meaning, and her great body, warm and bulky, moved surprisingly easily, Kathy noticed, Without a moment’s hesitation she had taken Kathy in her arms and was clasping her in her ample frame. Kathy could feel the mounds of flesh against her own body, and could smell a slight odour on the woman, which was not unpleasant.

‘I’m Jenny – Jenny Wren,’ and she laughed loudly at this supposed joke. ‘What’s your name, duck?’ 'Kathy Harris,' replied Kathy, trying to get used to this name, Harris, and then waited for the next question. ‘Paul brought you? Well, of course you stay the night. I can see you’ve nowhere to go. Well, we’re used to folks like you. You’ll be comfortable here.’ While saying all this, she had found herself a whisky glass from an oak cupboard that hung in one corner. Kathy thought it was the best bit of furniture in the room, and that it was probably an antique. Jenny settled herself into the armchair across from Kathy, and gazed at her for a moment, allowing the whisky to slowly settle into her and cast its spell of pleasurable sensations all over her large person. ‘Where’re you from?’ she asked. ‘Manchester,’ interposed Paul. ‘And she don’t talk like she’s from there,’ he said, as though Kathy were not present. Well, I don’t know about that. She ain’t said anything yet,’ said Jenny. ‘Why are you here, dear?’ Kathy repeated her story, carefully making sure she only imparted what was necessary. ‘Well, I’m sorry to hear your parents are addicts,’ she said, but cautious, Kathy noticed, not to get herself involved in any discussion around people doing drugs. ‘But it’s nice to get away,’ she said brightly. ‘I left home at fifteen, and never looked back since. A nice home, very happy, but I just wanted to be away. On my travels! And never looked back since!’ And she took another swig of whisky, and a far-away, troubled look crossed her brown eyes for a moment or two, taking all the merriment out of her face. ‘Mum,’ said Paul, and Kathy sensed some anxiety in him (perhaps he was watching the consumption of the whisky). ‘Mum, we need supper. Shall I go down to the Chinese take-away?’ ‘Oh, luv, is it supper time already? Yes, it is.’ She had looked at her watch and registered surprise. ‘It’s late! Be a luv and get some chicken curry for me. What’ll you have, Kathy?’ Kathy had no idea, never having had Chinese food. They only had tea out at home, now and again, and never supper. ‘Oh, I don’t know,’ she said, slightly flustered, feeling ignorant. ‘You choose for me, Paul.’ Jenny opened her purse and gave Paul a twenty pound note, and Kathy knew she must somehow repay Jenny for this favour.

Paul was gone for about twenty minutes – an interval which gave Kathy and Jenny enough time to learn something of each other. Under Jenny’s questioning, Kathy enlarged on her story slightly, disclosing the fact she had a younger sister, Ellie, who was still at home, and who was visited by social workers. Jenny looked at Kathy, penetratingly for a moment. Kathy tried to shrink into her eye make-up, and felt she should have applied more lipstick. ‘You don’t look like one of those kids,’ she said. ‘You look educated; you feel educated.’ ‘Well, I kinda took refuge in my books,’ said Kathy. ‘It was a way of getting away from the hell of it all at home. All that doing dope. It’s so awful, you know …………….’

Jenny was silent for a while, no doubt considering these apparently ingenuous remarks of Kathy’s. She contemplated the dead fire in the grate, and, seeming to find no solace there, took another swig from her glass.

Kathy, Wait For Me! is the gripping tale of a girl trapped in gangland London and her courage as she struggles to escape and forge a new life.

The story traces Kathy’s psychological-spiritual development as, suddenly orphaned, she is shipped off to London from her village in the north of England, where she had begun to develop an abiding love of nature and where she had learnt something of the ancient lore of Britain from the teachings of an old gypsy woman.

Disoriented in London, she is easy prey to fear and gangs. She attempts to draw strength through an identification with a well-known literary character. But it is her past connection to nature that preserves her sanity.

Visits to Chalice Well Gardens and Glastonbury’s prevailing ambience of the court of King Arthur revive her interest in and love for nature and the mystical.

Reunited with her grandfather, her sense of self and belonging is partially restored, and a belief in the importance of family is reinforced.

Kathy finds herself involved in continual moral struggles, tests of courage and intelligence, and finally realizes the only salvation is good character and a love for nature and the Creator.

Trained as a family therapist and social worker in London and with over 20 years’ experience of counselling, Morelle now works in the USA as a life coach. She is a lover of nature and deeply interested in the beliefs of the ancient traditions of the British Isles and Native Americans.