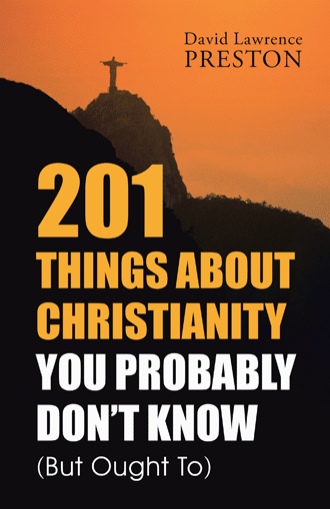 Until the early 19th Century few people in the Christian world dared to question the accuracy of the Bible. Only when the biblical texts began to be studied seriously in the early 1800s and cross referenced with other sources did a better understanding begin to emerge. As result, most Christians at that time had a very unrealistic view of Christian history and their religion, and now, two hundred years later, most still do. They don’t know how their religion was founded, who wrote - or did not write – their sacred scripture, the New Testament scripts, when, or in what order. They’ve never compared the gospels and wondered why they differ so much both in content and detail. They have no idea how the religion developed over subsequent centuries. They can’t even tell you the real name of their saviour, the language he spoke, or the language in which the New Testament was originally written. But unless we understand how the New Testament came into being and how it ties in with the historical and archaeological records from that time, we will never understand Yeshua (the name by which Jesus was known in his lifetime) and the religion that functions in his name.

My interest was triggered when a friend lent me a book called ‘Joshua’. Written by a retired Catholic priest, Father Joseph Girzone, it tells the story of Yeshua’s return to Earth as a humble carpenter in modern-day America. It’s a heartening tale of a compassionate man who engages the local townsfolk with his warmth, wisdom and generosity. I won’t spoil it by telling you what happens, except that he ends up being sent to Rome and thrown out of the Catholic Church for subverting their religion!

So impressed was I by this simple, down-to-earth tale that I started to explore the Christian scriptures. I read the New Testament cover to cover and attended Bible classes. I studied the Hebrew Scriptures (better known as the ‘Old Testament’). I rediscovered teachings about love, compassion, forgiveness and sharing that took me back to my childhood experiences as a regular attender in church and Sunday School. I put them into practice as best I could and found, somewhat to my surprise, that they made my life better. I went on to give talks on biblical wisdom and spirituality to many audiences. By then I had digested hundreds of books on personal development and practical psychology and found most of the gospel teachings compatible with the best of them. I even started referring to myself as a follower of Yeshua, which, ironically, brought me into conflict with some Christians!

Biblical scholarship has reached a new high in recent decades. New and better evidence has become available for historians, theologians, archaeologists and linguists to scrutinise for factual accuracy and new meanings. We have a better understanding of 1st Century Palestinian society than ever before. Scholars go back to the earliest possible sources and can discern with a high degree of certainty where original material has been altered. They examine the style and language of different passages to identify where several authors were at work. They study the context in which the manuscripts were written so they can piece together clues and fill in the gaps.

Much of what is contained in my book has been known for at least a couple of centuries and taught in seminaries and theological colleges around the world. Some has found a wider platform in the broadcast media and literature, but is rarely communicated to the people in the pews.

I’ve had many conversations with churchmen and women in recent years and discovered that many of them dare not share the truth for fear of confusing their congregations and losing their employment. One Anglican vicar told me that, like all trainee clergy, she had studied the Bible from a factual-historical point of view at university. I asked her why, then, vicars continued to peddle the same old line in their Sunday sermons as if nothing had moved on from the 17th or 18th Centuries. Her reply astounded me. ‘Because they (the congregation) don’t want to hear it!’

‘Because they don’t want to hear it!’ Why not? Psychologists tell us that once people have made up their minds about something they don’t want to change so I don’t expect to make any friends in church circles by presenting the facts. Previously I had believed that the church itself was the sticking point, being suspicious of anything that could make its traditional beliefs redundant and threaten the foundations of its faith. Once an idea has been labelled ‘the word’ or ‘will’ of the Almighty and people have convinced themselves that this is so, all discretion, all criticism, all scrutiny goes out of the window. For example, if you believe, mistakenly, that the gospels were written by contemporaries of ‘Jesus’ who knew him personally and wrote down what they observed at the time, then no amount of evidence and reason can shake your faith in them. Your mind closes to alternative ideas, and so do your ears. Common sense flies out of the window. But surely any belief system that cannot survive scrutiny is of little value?

This book offers a selection of facts which I hope you, the reader, will find interesting and significant. It may change your viewpoint on certain things, or not – your choice. I’m confident that few independent experts on the history and practice of Christianity would disagree with the information presented here, although some may differ with my interpretation. All I can do is set out the facts in good faith according to my understanding.

Award-winning author David Lawrence Preston uncovers the facts about Christianity that most people—including Christians—don't know and explains why these facts are so important.

David Lawrence Preston is a speaker, life coach, and author specializing in life enrichment, holistic health, and spirituality. He first became interested in these subjects after a life-changing experience in Moscow in 1990 and has since taken his knowledge and insights to five continents. Much of David's work is based on his experiences overcoming low self-esteem in his youth.

David’s interest in Christianity dates back to his school days and his passion researching the world’s great spiritual traditions. He has written widely on the subject and given many talks and workshops to a variety of audiences. He lives by the sea on the South Coast of England, where he dedicates himself to helping create a kinder, gentler, more authentic and spiritual world.