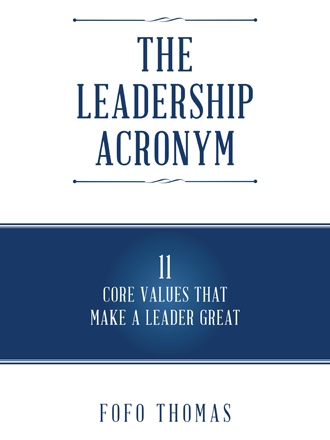 True leaders are those who leave positive marks in the minds and hearts of people wherever they are. People easily imitate what they see quicker than what they hear. Consider these adages, "Seeing is believing", or "Action speaks louder than words." When a leader is narcissistic (full of himself) — thinking he must be seen, known, appreciated and loved, he misses the leadership mark. Whether people know you as a leader or not, they still want to be certain you can be relied on.

Followers are not astounded about who you are because in their minds they've already measured you. Your people are more interested in your present and future glory than your past successes. They are always looking at what you say and do, not on what you have done or what you boast of.

It is in the benefit of every leader when mistakes are turned into stepping stones for success. Leaders who don't learn from their past and past mistakes keep repeating mistakes. Others might not have set good examples for you, but as a leader, you cannot afford to lead without modeling or showing good attitude. Treating people the same negative way you were treated is a form of retrogressive leadership.

In parenting, children imitate what they see their parents do. So it is when it comes to leadership. Followers adapt to the ways (ethics and values) of their leader. You are the seed of the fruits your organization produces. Meaning, you are the inventor of what behavior is demonstrated in the organization. Whatever behavior followers or employees depict can be said to be the acceptable norm of the leader. That is why coaches and managers are held responsible in sports for a team's failure. Why? Because the performance of the players depict a picture of the leader's influence. It is the same reason why leaders are blamed when an organization fails or the reason why presidents are accused for bad governance. It is also the reason why parents are generally blamed for the misconducts or bad behaviors of their children. Because the principles a leader sets are what his people follow and what followers do (consciously or unconsciously) is seen as the satisfactory standard of a leader. As a result, everything rises and falls on leadership.

The activities in your organization are representative of what you value. You are responsible for every behavior your people demonstrate at work. Whatever you model, followers follow through with you. The practices around you can be said to be the characters you accept. For who you are is who you attract. And who you attract is not determine by what you want. It's determined by who you are.


TO SET AN EXAMPLE USE:

In setting example, a leader must know, he is the example; not his position. Don't be a leader who says to his people "do as I say and not as I do", leaving your leadership-acts in dualism. When a leader thinks words are everything he places value on them. But won't you agree to it that what we do communicates more of us than what we say? In example setting, words become valueless if it doesn't drive action. It is like the inscription on a cigarette park which says, "Smoking can be harmful to your health." The inscription has lost its value because the harmful product never ceases from production. It is the categorical reason why many leaders are losing trust today. What they point out for people to avoid is what they end up embracing.

The Leadership Acronym is based on leadership abilities. On how a leader can gain and use influence to win over the hearts of people and to get desired things done.

It takes influence for any leader to successfully lead. Without influence, leadership will be based on power and position—where the leader will abuse and assault people in order to carry out instructions.

Leadership is not meant for a selected few. There is no one born with the wisdom of leadership. All successful leaders learn to lead.

Fofo Thomas is a pastor, leadership coach, and motivational speaker. He has inspired countless people to become the best they can by discovering who they are, identifying themselves with their purpose, developing themselves, and making a difference in their world. For the past five years, he has taught educators, divisional leaders, and people who aspire to become great leaders on how to effectively work and win with people. His primary passion is adding value to people.

Thomas is also a member of the HuD—Human Development—group, a nonprofit organization that trains and teaches personal development and leadership around Ghana.