Reawaken Your Authentic Self

Fully Awaken & Monetize Your Life Purpose by Becoming Who You Really Are! 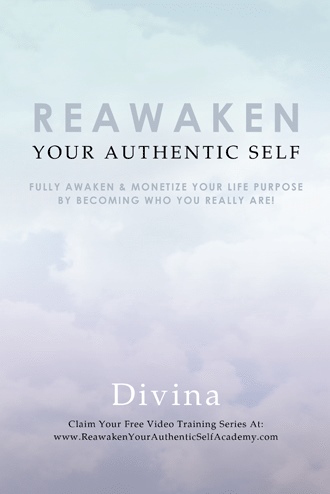 Right before the moment of reunion with that basic essence of my authentic self, as I mentioned, I was suffering from not being able to forgive myself or others. That inability to forgive was letting a lot of dark energy cloud my mind and body. This situation was so unbearable that I had no choice but to forgive. In my third eye, I saw a very thin layer of darkness release itself, and all of a sudden, I felt what was like a burst of new abundant energy rushing through my body, and then I felt almost like another person was moving my body, and it was yelling in excitement, “Oh, my god! I’m in my body!” over and over again, nonstop, for about thirty minutes. I couldn’t believe it! Was this me talking? It felt like a part of me, which had never before been in my body, was opening my mouth and speaking through me. The grateful energy speaking through me was somewhat familiar, but the part of me that incarnated in my physical body felt somewhat alien. That moment was the most perplexingly euphoric, ecstatic experience because, as I learned, the highest self is all happiness and joy—there is nothing else. When I finally let go of the last remnants of darkness and resistance to forgive, after four years of intense soul-cleansing in sacred healing ceremonies and soul-activation meditations, and I permanently adopted a divine sacred physical diet of living, blended liquid superfoods that were channeled by my highest self, then I finally created a cleaner and higher vibrational body temple for the foundation of my highest self to expand itself into my body and express its joyful self!

Everything changed after that night; everything around me looked more alive and magical, and I experienced a more expanded level of joy. I won’t say I was perfect after it; there is always another level to grow into no matter how high you go, but this experience was the very beginning of my hope for an abundant future. I was quite unstable and wobbly, like a newborn, hatched chick that had just pecked itself out of an egg’s confinements and was now learning to walk. I began to notice a lot more presence and joy in the current moment—something I had never before been able to sustain for long periods of time.

In this radically life-changing book by Divina, you can discover how to express and monetize the fullest potential of your god-given talent. Learn - the science and psychology behind a great mind and mindset; - the understanding of how to have real happiness and how it prospers you; - how to manifest abundant energy and virtually ageless and permanent health; and - how to anchor your authentic self into your body to maximize your talents. In Reawaken Your Authentic Self, expert trainer Divina reveals the top and most life-changing tools and techniques for reawakening your authentic self. These techniques can maximize your god-given talents and generate greater prosperity. This book breaks the concepts down into four major chapters that address how to activate mental, emotional, physical, and spiritual bodies to create an integrated authentic self.

Divina, bestselling author of Reawaken Your Authentic Self, is a certified Law of Attraction life coach and the founder of Reawaken Your Authentic Self Academy, a program that helps individuals maximize their talents and life purposes to their fullest potential so they can generate an abundant lifestyle. The academy is all about teaching people how to reawaken their authentic selves to get ahead in their personal and professional lives. After a period of six years of intensely following the teachings written in her book Reawaken Your Authentic Self and used in her academy programs, Divina experienced a profound transformation where the essence of her highest self merged back into her physical body. Since then, she has dedicated her life to reawakening others into their authentic selves so they can realize their dreams through their own artistic talents and messages. The powerful teachings in her book Reawaken Your Authentic Self had a profound effect on her journey in rediscovering and reawakening her authentic self within and sharing and teaching this message of reawakening to others. Meet Divina and her talents and gifts at: www.ReawakenYourAuthenticSelf.com www.ReawakenYourAuthenticSelfAcademy.com