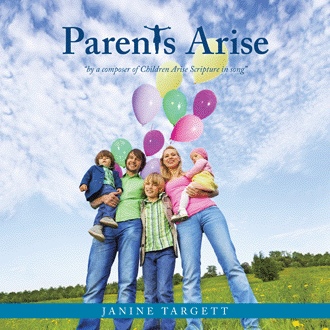 After reading ‘Parents Arise’ many parents have said, ‘This is the missing link to Christian parenting!’

As the stories unfold, you will find this is a book you won’t be able to put down. Once the journey of the Targett family begins you will want to follow their story right to the last page!

God gave Janine a revolutionary idea when she asked Him for a blueprint to bring up their children in God’s Ways. He spoke three things into her heart:

As Janine recounts the adventures God took the family on after showing her these three directives for godly parenting you will find yourself wanting to begin the same adventure – and it is all there for you to follow in an easy-to-read style. Janine writes with refreshing honesty, humour, and instruction.

Read about the power of a ‘Verse Time’ and the amazing release from anger that occurred through the ‘Sorting out Prayer.’ These are just two of the many keys in Parents Arise to unlock the puzzle of parenting and all are found in Scripture.

God gave Janine the Scripture, the music, the method, and now the message to be shared with parents around the world.

JANINE TARGETT lives with her husband Paul in Tasmania, Australia. They have three happily married children and seventeen beautiful grandchildren. Janine, a trained primary school teacher, made a decision early in her marriage to stay home and make raising their family her career. Today, as well as spending time with her children and grandchildren, Janine loves to write, travel, and speak, together with Paul, on the subject of family. Janine and Paul have produced a popular course titled ‘Parents Arise – Raising Children God’s Way.’ Their hearts desire is to see families restored and strengthened in the ways God intended.