Babies Come From Where?! 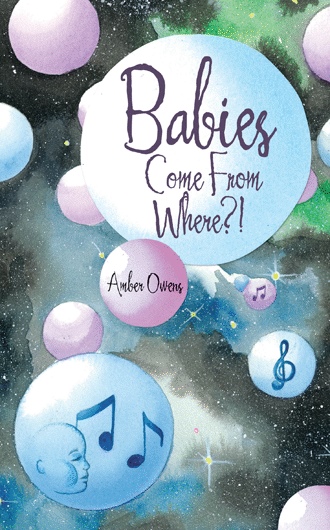 Bina sits Indian-style on the park bench near the edge of the lake... and meditates on what it means to feel free and at peace and in love. She looks down at her baby son, Cadence, who sits comfortably in her lap. Comfortable, yet hot. Little beads of sweat appear on Cadence's hairline.

Bina wipes his sweat away with her hand, then kisses his temple. She gets a whiff of baby scent coming from his head. Even the hint of his infant musk smells so sweet to her; intoxicating, actually. She sniffs his sweaty head repeatedly, thankful to be a mom with the ability to have such access to this innocent little being. Grateful that she is allowed to love with such intensity...

… Peeking down, she catches him staring studiously at her, finding her absolutely more fascinating than the natural world around them. He studies her with such alertness and curiosity, as if memorizing every freckle and hair on her face. His big, bright gray tinted eyes travel from Bina's long, wavy hair, to her forehead, nose and lips, then back to her eyes. She sees her reflection in his eyes so clearly, like a mirror. Except her reflection in his eyes is more radiant than in any mirror; unblemished and perfectly defined. Only she exists in his eyes.

Their loving gaze instills calmness, and brings a smile on both of their faces. He gently touches her lips with his teeny right hand. The softness of his tiny fingers makes her nibble on them. He chuckles, revealing the dimples in his cheeks. She treasures moments like this, knowing they will pass too fast.

He pushes his lips up and out for a kiss, to which she gladly gives, almost wanting to bite him because he's so deliciously cute. She feels inspired to sing...

… She knows he loves it when she sings to him, especially when she's holding him tight.

Deeply fixed on her eyes, he attentively soaks in her melody. He still rests his little fingers on her bottom lip, opening his mouth as if tasting her words. At that moment, birds from afar cast shadows over Bina and baby Cadence, flickering their wings against the blue sky backdrop...

“... You like my songs, don't you babe?” she emphasizes while tickling his underarm. “And so does the tickle monster! Grrr!” Whenever she tickles him, she makes sure to introduce the “tickle monster.”

He squirms and giggles uncontrollably, compressing his arm into his side with all his strength, obviously hoping it will prevent her from continuing the task. He closes his eyes, and laughs until he can't breath. He wheezes a little while catching his breath. He opens his eyes when she stops tickling, and makes a cute little squeal.

“Son, do you know how much I love you? Too much to describe with words! And I know that you love me just as much, with all of your little heart. Someone asked me how I know that you actually love me, and don't just think I'm the 'food truck'. I replied that love isn't simply a thought or emotion. It's an electric connection. When it's there, we just 'know' – without thinking about it or even feeling it.”

Cadence seems to enjoy her keen enthusiasm regarding her concept of love because he belts out a “teehee” and claps his hands...

Bina whips out a small journal from her purse (which is also the diaper bag), and begins writing. She writes a complex version of what she just said about love. Cadence inspects the paper like he can read. He leans over, pressing his weight onto Bina's thigh, towards the paper she writes on. His neck stretches out and his perfectly rounded head bobbles slightly from his shift forward. His eyes are wide with vigilance, intently fixed on her paper.

Unexpectedly, Bina hears a man's blood-curdling voice whisper, “What are you writing?”

She jumps from startled nerves. Her skin prickles with goosebumps. She looks up expecting to see someone standing there, but sees nobody. Cadence's small body jolts slightly from her frightened movement. He practically drops out of her lap onto the ground, but she recovers her secure hold on him.

The spooky voice continues at her, “Why make the easiest things so complex?”

The raspy whisper is so close, it sounds like someone speaking into her ear. But nobody else is around except herself and Cadence.

She crouches down placing her nose on the infant's head, “That was weird. Did you hear that, Cadence?” she asks, simultaneously pulling his body closer to hers.

Cadence looks back at her, raising his eyes up, and replies in a diabolic tone, “Of course I heard, after all I asked it.”

Pause. Silence. Bina is frozen. She just looks at her baby, a wee-bit too frightened to get up and run.

Cadence clears his throat, “Excuse the raspy voice. Sorry bout that. Whoa, I must have sounded so scary! AhhhHaaaHaaa!” He laughs to himself placing his hands on his little belly. “I should've cleared my throat a long time ago. But I hesitated because I love that clogged feeling that makes my voice sound deep and gruff. You know what I mean?”

Bina keeps in silent astonishment, staring at the talking infant... Her heart pounds so fast that she feels it will pop out at any second. Tempted to toss the baby into the lake and flee for her life, Bina remains seated....

“Ok, so don't freak out,” Cadence suggests, putting his miniature palms up in the air.

“Too late, I already am. My baby is talking clearly, and in a foreign accent. Why would I not freak out? Of course I'm freaking out! A baby, MY baby is talking, with a grown man's voice, in a foreign accent. And I'm responding ... to my baby ... who speaks like a man.” Bina's shoulders tensely raise higher and higher as she speaks from the awkwardness of the situation.

It’s finally here! The unforgettable tale our mommas never knew. If they had, it would have been their explanation to, “Where do babies come from?” If you have a baby, are fascinated with babies, or just want to read an originally twisted spin on babies, this is for you.

This is an incomparable, must-read fantasy story for all baby lovers! Come travel with Bina and baby Cadence, through the enchanting journey of parenthood, from the baby’s perspective. Discover the shocking truth of where babies really come from—told straight from the baby’s mouth!

Amber Owens is an unconventional fiction author, writing to inspire other beautiful minds. She holds a Bachelor’s Degree in English, Writing and Literature. Amber’s creative work is intended to spark the imaginations of all ages. She lives with her family in Southern California.