Gifts from the Storm

How I Came to Trust in Spirit 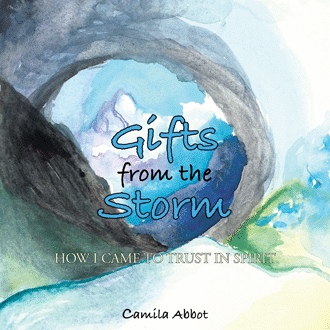 My husband and I had just moved into a new house, a few months before. To an outsider, we looked like a happy young couple with three adorable children. The reality was that there was no closeness, intimacy, honesty or respect present between us-- qualities that, in my opinion, are essential in a marriage. Without them, I felt that I could not be happy. I realized that we had failed to move in the same general direction of life. I was more and more intent on growing in authenticity and he was determined to stay the same. I saw crystal clear that I had “fallen in love” with the man I had imagined and wished to have in my life; that I had given those ideal attributes to my husband-- attributes he did not have but that he had subsumed during our courtship. When we first met, while attending community college, in the Spring of 1984, I had been starved for companionship, for someone to talk to about life, about the deep parts of my soul, and with whom I could share my thoughts on relationships. In opening my heart to him and talking about all I cherished, I gave my husband (to be) a perfectly mapped route to my heart and he used that map very well-- if not consciously, then subconsciously-- to become in my eyes the perfect man for me to marry and have children with.

These realizations about the hollowness of my marriage were swirling around in my mind, when close to midnight on January 2, 1997, my husband and I were awoken by the cries of our son Liam-- who had just turned 9. We hurried to his bed as he said that he wasn’t feeling well; I noticed that he was shaky as well. I took his temperature but he did not have a fever. Something did not feel right… We decided that I would stay home with the sleeping children and my husband would take Liam to the emergency room of the local hospital.

On the second floor of our house, there was an area with a balcony that looked out to a very large window and I spent four long hours sitting on the carpet as I looked out that window and waited for their return. Without explanation, I was sobbing uncontrollably the whole time-- as if something terrible had happened and I remember, wondering in the back of my mind, why I was crying but I just could not stop myself: the tears just ran and ran over my cheeks in an endless stream. I see now that, at a deep level, I knew that something was seriously wrong with my son but how could I explain such knowledge? I had a very skeptical mind back then and it would never have occurred to me that there was an inner wisdom, available to me, informing me, Those were the first whisperings of the voice of Spirit …

Camila was an unhappily married mother of three when her oldest child was diagnosed with cancer. This tragic event sent a shockwave throughout her existence, propelling her upward, out of her disappointed complacency in life, and into a broader realm of examination. It would call her to question all her previous beliefs, beginning with the true nature of love. Once this portal of exploration was opened, she began to hear a voice whispering through it to her—a voice not of this world but of the spiritual dimension. This voice, she realized, had been whispering to her all her life, trying to guide her on her journey toward truth though, in the cacophony of societal distractions, she had unfailingly ignored it. In the midst of a tumultuous inner storm, it spoke to her once more, through the open door of her grief—but this time, she was able to listen. Weaving through the emotional landscape of personal experience combined with the ethereal wisdom of a spiritual presence in our lives, this book has the power to help readers reimagine their own personal struggles within the scope of a wider dimension: a dimension that is always available to us as a guide. You will finish reading this book with a feeling of having expanded your awareness and with a deeper understanding of love and its power to transcend all things—even death.

Camila Abbot has worked as a hospice social worker for the past eleven years. Eighteen years ago, she had a life-changing experience, which she is choosing to share with the world in this book, her first literary effort. You can find her on Facebook for discussion and inspiration. She lives in Michigan’s Upper Peninsula.