I Think I Gave God A Ride To Work Last Night

A Book of Emotionally Charged True Stories of Love, Family, and Miracles 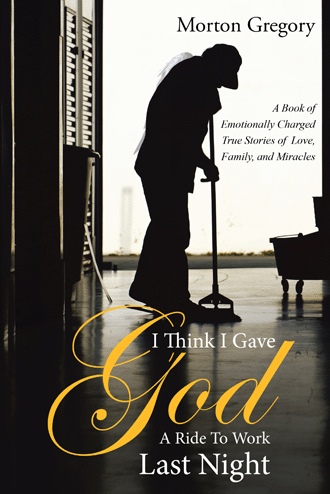 My twins went into the woods to find a Christmas tree. What they came out with was a miracle.

Christmas was only three weeks away when the story began. The stores were all packed with shoppers who were hurrying about their business with not enough time in the day. The school plays were all scheduled. East Central High was going to do another rendition of “The Three Wise Men Meet Santa Claus.” People’s Christmas lists were bigger than their bank accounts. But that didn’t matter. All the stores were advertising no money down and no payments until June. Yes, it looked like it was going to be a typical Christmas in Small Town, USA—until the Friday night my twelve-year-old twins asked their mother for permission to go into the woods and cut down their own Christmas tree for their room. We had just moved to the country that year, and the boys had a room the size of a small house. She gave them permission, and they went off to bed.

When we came downstairs the next morning, much to our surprise, there was a note on the kitchen table. The boys had already left on their quest to find the perfect tree. The note was written in red crayon on a blank sheet of white paper:

Mom, we went to get our tree.

My wife and I looked at each other and thought about how cute it was that they were excited enough to leave so early in the morning. I headed off to work, my went wife to the barn, and our day had begun. It When my wife came out of the barn and saw the sight she did, she knew our Christmas was about to change.

She heard a noise and looked up at the hill. She saw the boys coming from a distance. One was pulling a hot purple plastic sled across the fresh blanket of white snow, and the other was pulling a skinny, little pine tree. All she could do was smile as she watched them come closer and closer, all dressed in their oversized boots, scarves, and winter hats, bringing home their prize tree.

When they got closer, she could see they had red faces, runny noses, and a story to tell. On the purple sled, they had the weapons they had taken into the woods to bring down their first Christmas tree. They consisted of two dull axes, one rusty hacksaw, and a hammer that was never supposed to leave the barn.

When they got to her, they were out of breath. With their eyes the size of saucers, they said, “Mommy, you won’t believe what happened!”

When they caught their breath, they told her how they looked and looked but couldn’t find any Christmas trees. When they were about to give up, they came across a tree growing out of a stump. After they argued about whether or not it was going to be their tree, they decided they would take it as their special tree.

They got their tools ready, and when the saw blade touched the tree, the clouds opened up and a ray of sun came upon their tree. It was so bright that it blinded them for a moment. They felt this feeling all through them. They said it was like a TV show. They expected the angels to start singing. Neither of them spoke a word as they cut down the tree, but as they were walking home, they decided they didn’t care if they came across a tree that looked like it came off a Christmas tree lot—they knew that this one was theirs.

My wife canceled her plans for the day. Instead, she went to the cellar with the boys and found the perfect Christmas decorations for the little pine tree. They went out and bought a special string of lights for it. They set it up in their room, and the boys wanted to put a little manger scene under it that had been their grandma’s.

My wife stepped back from the tree when it was all done and said, “There. It’s perfect!”

The boys said, “We know. Someone perfect picked it out for us.” The boys talked about Baby Jesus a little more that year. I called their skinny little tree “the blessed tree.”

A few days later, I was sitting at the kitchen table with one of the boys. It was a cloudy day, and in the distance, we saw a bright ray of sun coming out of the clouds.

He turned to me and said, “Maybe someone else is picking out a Christmas tree.”

I just smiled and said, “Maybe.”

I think God touched the boys with that little tree. I know He touched me. I would go up in their room to check on them every night before I went to bed and turn the lights out on “the blessed tree.” I would look at them in the soft light and then at the tree. I would look up and say, “Thank you.”

Christmas came and went. After the holidays passed, I went out into the garage and saw “the blessed tree” waiting to be thrown out and taken to the dump. Something told me I couldn’t let that happen.

The snow was deep. I frantically looked for the right spot as daylight faded. Right when I was about to find “the blessed tree” stump, something told me most of us give up right before we are about to succeed. I said, “Come on, blessed tree, where are you?” I turned, and right there before me, I saw the stump. I duct taped the “blessed tree” back together, took off my hat, held it to my chest, and stood in silent reverence for a moment. I closed my eyes and said a prayer of thanks to God for the tree.

As I walked home, I felt good about what I had done. The snow and wind had stopped. A feeling of peace came over me. I came to the top of the hill and saw our house. The sun was just disappearing into the night, leaving a beautiful red glow in the sky. It seemed to finish the day off at peace. I realized I was a little different for doing something like that, but that’s what my wife says she likes about me. I don’t know if the tree will ever grow again, but I knew I just couldn’t throw it out to the road.

My wife said, Maybe a seed will fall from it, and there will be more ‘blessed trees’ for other little children to find.”

Maybe a red-faced, runny-nosed child with a story to tell will look up at the prized tree with eyes like saucers and say, “Grandpa, you won’t believe what happened!” Dad will look over at them and smile, and we will both turn to the child and say, “Oh, yes, honey. We believe. We believe.”

An inspirational book of short stories. These easy to relate to stories have a unique power to draw you in to a much deeper level of understanding of your own life and the world around you. This book will make you smile, laugh, cry, and leave you pondering the true meaning of your everyday miracles. An easy and fun read that is truly health food for your mind and soul.

“Morton Gregory’s ability to capture the mystery in everyday life experiences responds to deep searching in all of us, to find meaning and purpose in the ordinariness of our lives”

“Morton Gregory expresses himself in such an honest and authentic way. This book will help people celebrate little victories and encourage them to savor this life’s journey”

Morton Gregory lives nestled in the Saint Lawrence Valley in Northern New York. He and his wife own and operate a small business in the small town of Ogdensburg, New York. Here he and his wife raised their five children on a small hobby farm located just outside of town. It is through his own life events that he was allowed the opportunity to appreciate the small miracles of everyday life even though they are not so small after all. Morton Gregory’s lifelong dream was to write a book that shares these true life experiences with all audiences. His hope in writing this book is that it will touch the lives of all that read its stories and help them relate it to their own life events.