Condemn Not My Children

The Consequences of Pious Evil 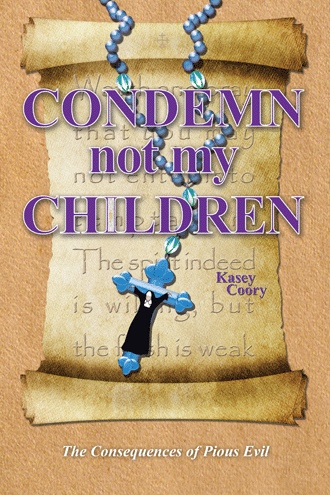 Dorina put Kalvin to sleep in the bassinet. She noticed a packet of tissue papers next to the ashtray on the table. Upending the ashtray, she unpeeled a few butts and rolled a cigarette with the trailing’s of tobacco. Sitting on the unmade bed she drew deeply savouring the calming effects of the nicotine. With the exception of one visit to the lavatory Dorina did not leave the shack and no-one from the household ventured in with a greeting. In the mid-afternoon, as she breastfed, Dorina noticed Jacob pass the window on a slow traipse to the bottom of the garden, rosary beads in hand. The thought came to her that she had not been to mass or confession for months. Nor could she remember when last she said the rosary or prayed in any meaningful way. It was as if her devotion had been erased by a Church hell-bent on eradicating the truth and the reason she had been sent to the house of a secular welfare organisation for the gestation. The Church had condemned her to a life without meaning and the hopelessness of a spiritual vacuum. Gently rocking her baby as it suckled she cried the tears of the forsaken and succumbed as the slink of psychosis invaded, bringing with it the malady of nervous hysteria. When Joseph returned from the day’s work he was surprised by the unkemptness of his wife. She had not changed from her nightdress and the bed was unmade. Scraps of cigarette paper, butts and ash were strewn on the table and from the odour of the bassinet the crying infant needed attention. “Are you sick?” “No! I just need a cigarette.” “I didn’t know you smoked?” Joseph took a tobacco pouch from his jacket and handed it to her. “Well, I didn’t till Mavis, she had a little girl, started me off.” “Mavis?” “She was at that home with me. You know the place, where all we wicked bitches get sent to.”

When a deviant priest violates a nun, she is sworn to silence by the church in order to avoid a scandal—and then married off to the priest’s older brother, with unforeseen consequences.

Abandoned by those in whom she has placed her trust, a desperate mother suffers a mental breakdown and is deprived of her children.

Near the end of the nineteenth century, two families immigrate to New Zealand, sparking a story that will follow both from that time through the middle of the twentieth century. As an unholy liaison interweaves the two groups, the emotional tapestry is unravelled and rewoven by women of the following generations, each with her own story of heartbreak and courage. Throughout the tale, sacrilege and defilement are first hidden and then revealed, demonstrating the consequences of ignorance and the condemnation of the mentally ill.

In the sweeping saga set in New Zealand, women from several generations of two families deal with the heartbreak of betrayal from those they most trusted.

Kasey Coory is a New Zealander of Lebanese and Italian extraction. As a child he suffered from the intolerance and prejudice of dysfunctional relationships. He brings to life a narrative of a bipolar mother who was ostracized by both sides of her family and the church she is devoted to.