The Seven Keys to the Mysteries of the Ageless Wisdom 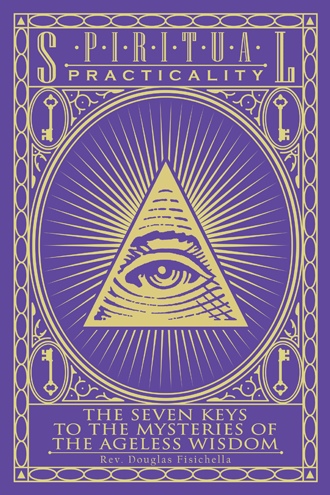 Spiritual Practicality is the integration of your spiritual life, your inner being in its totality, to the practical world. You live spiritually through every experience, because your awareness is changed. The materialistic approach to living in the West is an empty and illusory lifestyle. When you truly live spiritually, you will find that every aspect of your inner life has a practical application in the modern world.

The application of any set of principles to one’s life builds character. These teachings carry this idea to its ultimate expression - conscious union with the divine, through a series of recognitions, leading to revelation. Depending on where within the continuum your level of consciousness identifies itself, you will find appropriate meaning in these multi layered teachings to better your understanding and thus, your life. When we learn to move in harmony with life itself, our burden is felt differently.

In all of this, we are exploring the nature of being and knowing through teachings that have permeated the mind of man through the ages. We will look at evolution but not just biological evolution. We will explore it in all its facets; especially the evolution of consciousness and the evolution of spirit itself.

In the various chapters to come we will be exploring ideas which may seem to be separate topics, with our Seven Keys as common threads that bind all of this knowledge together. These relationships will become clearer as we proceed and so we will, in some cases, find ourselves revisiting certain ideas in greater depth after having first addressed them somewhat superficially in the context of another conversation. This will especially be the case with the subject of the Seven Planes of Manifestation. We will of necessity, explore the various ranges of energetic matter which embrace us on our journey throughout this entire work. It will initially be an ancillary part of many of our topics and then later used to show the interaction of the entire creative process, once we have gained an understanding of the supposedly separate ideas.

We will study the Constitution of Man from the physical entity and its energetic, emotional and mental counterparts, to the Soul or conscious observer at its core. We will also address the Spiritual Essence at the core of the Soul, which is just another vehicle on a more rarefied plane for the indwelling spiritual essence.

We will study Reincarnation; the process through which that Soul enters the physical world or incarnates. It is a cyclical expression that mirrors the creative process in every other aspect of the universe. Through what is known as Esoteric Psychology, or the study of the seven rays, we will examine the influences which color human expression in the physical, mental and astral worlds.

We will look at The Trinity and its expression in man, as well as the various Kingdoms of Nature, and their relationships. This will include the emerging 5th Kingdom. The Kingdom of Souls, Paradise, Nirvana, Mecca, Satori, Heaven, or the Promised Land. These are all expressions of a state of being rather than physical locations. The symbol is in this case mistaken for the idea which it indicates. You will see this evidenced in virtually all of the misunderstandings of the ancient teachings. The words used to symbolize and point the way toward the truth are often mistaken for the truth itself. Joseph Campbell, Author of “A Hero with 1000 Faces” said "The main problem with symbols is that people tend to get lost in the symbol. The problem with myth and the problem with mysticism is that you should not lose the message in the symbol. The message is always of the spirit and when the symbol is taken to be the fact, so that you have to go to Haridwar to get to the source of the Ganges, you have mistaken the message. There is a similar mistake in the notion that you have to go to Israel to reach the Promised Land. This concretization is one of the major deceptions in the western handling of symbols. It is one of the reasons we have lost touch with the perennial message."

In an introductory work such as this, it will be impossible for me to go into any great depth on this vast array of ideas. Any of them could be the subject of not only and entire book, but a lifetime of study. My purpose is to expose you to this entire system of thought in order to better equip you in dealing with your life in general. What I present to you will also make the reading of the occult classics more coherent. Since you are reading this particular book, I know that you have begun a journey that will lead you to all of these ideas eventually. My hope is to ease the confusion that can result from that immersion, by creating a structure or scaffolding that will give shape to these ideas. Your further study will enable you to fill in the blanks more easily if this framework is in place from the beginning. If you have already been introduced to some of these concepts my hope is to show the relationships between them, thus lending clarity that will aid you in understanding and applying them to improve your life and the lives of those around you. To this end I will be pointing you toward sources of more specific and detailed treatments of these subjects as we go.

Energy follows thought. Creation on any level is the result of conscious choice, facilitated by mind and brought into physical reality through action, based on the desire to see the idea “realized.” The understanding of these concepts brings extraordinary power and responsibility into the life of the so-called average person. These are not impractical ideas ill-suited to modern life.

Spiritual Practicality is the integration of your spiritual life in its totality to practical living. You live spiritually through every experience, because your awareness is changed. When you truly live spiritually, you will find that every aspect of your inner life has a practical application in the modern world.

The so called Success Principals of our age are the Spiritual Principals of the ages and the Ageless Wisdom teachings. Equipped with the Seven Keys to the mysteries, we will reveal the beauty, unity, and yes, the practicality of the spiritual life.

There is something irresistible about this book. It is an unusual and masterful blend of common sense, clear writing, and advanced metaphysics in a style that is both mature and accessible. Wonderful for seekers of all ages and stages. Jonathan Ellerby PhD, bestselling author of Return to the Sacred

Take the 7 keys and open the door to a realm of knowledge and wisdom masterfully presented by Ageless Wisdom student of 30+ years, Douglas Fisichella. Prepare to embark on a journey that will inspire your own greatness! Liz Sterling - Author, Radio Personality, Motivational Speaker

A wonderfully broad survey of the universal wisdom teachings which lie at the heart of both eastern and western traditions. Rev. Fisichella displays an unusual knack for bringing the teachings alive, making them easily accessible and absorbing to both beginning and seasoned students. Kathryn Gann - Director, Theosophical Society in America

Rev. Douglas Fisichella is a lifelong student of metaphysics and the ageless wisdom. He has studied with the Arcane School of the Lucis Trust since 2005, is a member of the Theosophical Society, and was ordained at the Metaphysical Research Society of Denver in 2011.