The Adventures of Harry Wombat and Friends 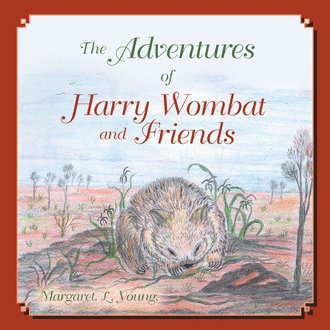 THE ADVENTURES OF HARRY WOMBAT AND FRIENDS Mrs Wombat was hot tired and hungry. She could not find her youngest child, Harry. Not that this was anything new! Harry was always wandering off by himself, without saying where he was going to play or dig. Harry, like all wombats loved to dig tunnels. It was a great game. Now Harry could not be found. This made Mrs Wombat ever so cross. It was time all good little wombats were in their burrows. Harry should be under the ground to keep cool, before it became very hot in the desert where Mrs Wombat lived. Harry and his best friend, Pat Bandicoot, had been playing over by the road early this morning. They were watching the cars, caravans and big trucks going by. Oh what an exciting life they must all have, especially the men in the big trucks that were loaded with all the goodies. Pat and Harry knew all about the goodies the trucks carried. Once, all the desert folk around Harry and Pat’s home had been terrified. One of the big trucks had cracked thunder, thrown stones and big black clouds, then rolled over, travelled on its side and made a gigantic red dust cloud. The desert folk could not see through the dust, before the truck came to a standstill and the dust settled. A man was talking on his two-way radio, and boxes were all over the road split open. The desert folk stood back and watched. Very soon another big truck came along, stopped and took the man away with it. Mr Emu ran and danced around the overturned truck, scattering boxes. Then he dipped his head and ate something crunchy and sweet. After that lots of the desert had a grand party, on all the breakfast cereals that had been broken open. Oh what a wonderful party feast they all had. Mr Emu and Ellie Roo stamped on broken cartons breaking them open, so the party could go on longer. The next day along came a truck to collect the unbroken cartons of breakfast cereals, taking them away. The desert folk still had lots left behind to eat. Oh what a wonderful party it had been. The desert folk still talked about that party, making Harry and Pat dream of great adventures.

Enjoy this colour-illustrated children’s book as you read The Adventures of Harry Wombat and Friends and discover the world of Australian native animals.

Harry Wombat is a very young, very adventurous, wombat who finds himself lost and far from home after he is coaxed into a car by two small children. Once he escapes the car, he discovers he still has to escape from the claws of an eagle and the jaws of a fox.

Perhaps, with some help from a friendly frilled-neck lizard named Brodie, a huge native bird named Mr. Emu (who cannot fl y), and a kangaroo named Ellie Roo, Harry Wombat might just survive his adventures in the Australian desert and make his way home to his worried mother.

Margaret. L. Young (nee Dyer) was born in the 1930s in Kellerberrin in Western Australia and grew up on a sheep, wheat, and dairy farm during the depression years. As she was denied an education when her school was closed during World War II, she mustered her courage in the late 1990s and enrolled in a computer course and began to write and illustrate children’s books expressing her knowledge and love for Australia’s native animals. The Adventures of Harry Wombat and Friends is her first published book. Her second book, Meggie and the Dingo, is soon to be published.