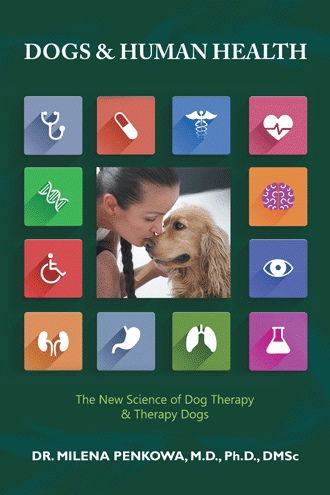 Living with dogs or simply being around a therapy dog for a short while can significantly improve our immune defense and in particular, even a short exposure to a dog influences the activity of leukocytes and improves their release of protective antibodies (Charnetski et al., 2004). As a result, dog owners' immune system is stronger, as to why they are less burdened by infectious diseases and allergies, as compared to people without pets or with other pets than dogs (Gern et al., 2004; Penkowa, 2014; Rock et al., 2003; Serpell, 1990,1991,1996).

The most groundbreaking study was performed by Dr. Carl J. Charnetski, who is a professor at n the Department of Psychology at Wilkes University. Dr. Charnetski and his colleagues were the first to investigate a dog's molecular impact on the human immune system, as they studied college students before and after the students petted a dog for 18 minutes (Charnetski et al., 2004). As controls, other students were assigned to either pet a stuffed toy dog or to sit comfortably on a couch for 18 minutes. Before and after the experiment, the levels of protective antibodies such as immunoglobulin A (IgA) produced by the B lymphocytes were measured in the saliva of the college students. The conclusion from their analyses was that only those participants, who petted the real dog (a Shelti) yielded a significant increase in their IgA antibodies (Charnetski et al., 2004). Hence, petting a stuffed toy dog (which had the same shape, size and texture as the Shelti) or relaxing on the couch did not lead to significantly improved levels of antibodies. The college students were also examined by means of the Pet Attitude Scale in order to see whether their immune functions were related to their feelings towards pets. Interestingly, their basic attitudes regarding pets were not affecting the immune system benefits derived from the dog (Charnetski et al., 2004). The latter aspect indicates that it is not as much a psychological impact but rather a matter of physiological and biochemical mechanisms that are responsible for the dog's immunobiological benefits. This notion is further supported by a study, where medical researchers from University of Wisconsin–Madison and University of Chicago analysed participants genetically, by which they demonstrated that the dog influences the human immune system by genotype-specific mechanisms (Gern et al., 2004). Hence, the dog’s immune effects interact with your genetics and the ways your DNA is arranged in specific genes relevant to the leukocytes, which underscores that dogs not only make us feel better, they make us react better.

The notion of dogs preventing allergies was already proposed by Dr. James A. Serpell decades ago, where he showed how dog adoption can significantly reduce the rates of allergy in the newly fledged owners, an effect that could not be matched by the control situation such as cat acquisition or no pet adoption (Serpell, 1990,1991). Similar anti-allergic benefits are obtained in puberty, as teenagers may reduce their risk of allergy later in life by getting a pet (Mandhane et al., 2009). This study also supports how dog-specific allergic sensitization is rather uncommon, since dog exposure stimulates proper maturation of the immune system, whereby the leukocytes' mistaken reaction towards allergens is counteracted (Simpson & Custovic, 2005). Accordingly, living in a household with dogs is not causing allergy to furred pets, as in fact, science shows that dog keeping results in quite the opposite (Almqvist et al, 2003;. Bufford & Gern, 2007; Linneberg et al., 2003; Mandhane et al., 2009; Ownby et al., 2002). In fact, living with two or more dogs is even more protective against allergy than living with only one single dog, which reflects that dogs' effect upon our immune system is dose-dependent, just as is the case with most medical drugs (Ownby et al., 2002; Simpson, 2010). The dose-dependency finds support in a prospective study of 474 children, who were followed from birth to the age of 6-7 years, during which they were tested for allergy and levels of allergic IgE antibodies (Ownby et al., 2002).

The fact that dog ownership is not equal to immune hyperresponsiveness and allergic sensitization might come as a surprise, since many people mistakenly think that dogs are associated to increased risk of allergy, which shows just how difficult it is to kill a myth. An a myth it is, since dogs in your home do not lead to increased allergic disorders, on the contrary, they do just the opposite, as shown by a continously growing amount of evidence as published in research papers (Anyo et al., 2002; Bertelsen et al., 2010; Chen et al., 2008; Epstein et al., 2011; Hesselmar et al., 1999; Lowe et al., 2004; Lødrup Carlsen et al., 2012; Mungan et al., 2003).

However, the reason the myth persists might to some degree be due to the allergic risk associated to other pet types, for instance cats, who compared to dogs have opposing effects on our immune system (Bertelsen et al., 2010; Epstein et al., 2011; Linneberg et al., 2003; Rock et al., 2003).

Hence, the cat (but not the dog) is among the four most common sources of allergens, the three others being house dust mites, grass pollen and the fungus Alternaria alternata (Arshad et al., 2001). Being sensitized to these four allergens is strongly linked with the incidence of allergic diseases. When selecting those in a population, who react to cat allergens, two out of three (66.7%) also suffer from asthma, eczema and/or allergic rhinitis (Arshad et al., 2001). In fact, exposure to cats in early life may increase children’s risk of developing allergic conditions, in particular asthma, eczema and bronchial hyperresponsiveness later in their childhood, while the opposite is the case with dog exposure (Bertelsen et al., 2010; Epstein et al., 2011; Rock et al., 2003). However, considerable controversy exists with regards to cat allergens, while in case of dogs, growing data support how dog exposure is a significantly protective factor against allergy and asthma (Marcus, 2011; Penkowa, 2014; Serpell, 1990,1991; Simpson, 2010). In fact, numerous scientific studies have now pinpointed how dog keeping significantly reduces immune-related malady and in particular asthma and allergic disorders including atopy, eczema, rhinitis, seasonal allergy to pollen and atopic dermatitis (Almqvist et al., 2003; Bufford & Gern, 2007; Bufford et al., 2008; Chen et al., 2008; Fujimura et al., 2014; Gern et al., 2004; Lødrup Carlsen et al., 2012; Mandhane et al., 2009; Ownby et al., 2002; Salo & Zeldin, 2009; Serpell, 1990,1991; Simpson, 2010).

What if you could significantly improve your physical and mental health by taking a simple step that’s easy, rewarding, and fun?

Dr. Milena Penkowa says you can do that and more by owning a dog – and yet people continue to invest time and money in costly treatments before even considering a furry friend.

Dogs can stave off diseases and certain cancers, erase pain, and ease anxiety, depression, allergies, diabetes, and cardiovascular disorders. Over the long term, they can also reduce the burden of dementia, epilepsy, stroke, Parkinson’s disease, schizophrenia and autism.

This guidebook explains the scientifically proven benefits of dogs, and you’ll learn how dogs:

• change the human brain so it reacts and thinks differently; • improve the immune system to make you more resilient than dog deprived individuals; • boost and invigorate the human spirit and secure happiness; • promote a life of longevity and healthiness.

Stop looking for fancy remedies to physical and mental problems, and start looking for a dog wagging its tail. Tap into a natural method to survive and thrive by learning about the fascinating connections between Dogs & Human Health.

Milena Penkowa, M.D., Ph.D., DMSc is a neuroscientist, medical doctor, and a professional provider of dog-assisted therapy and canine cancer-detection. She was a professor of neuroprotection at the University of Copenhagen before she founded “Hjerneeksperten” (www.hjerneeksperten.dk), a medical center providing second opinions within medicine, health, neuroprotection, and rehabilitation.