The Intriguing Story of a Bullet and its Travel Through Time 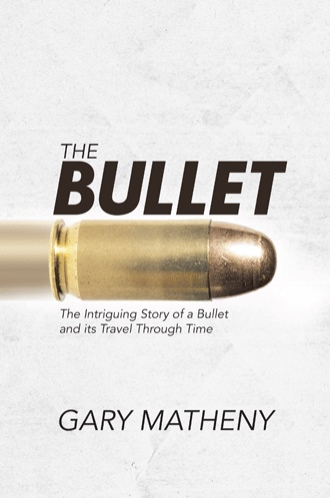 A bullet is fired from a gun and follows the shortest path between two points—in most cases. But in this intriguing story by Gary Matheny, the bullet at the heart of the novel travels a circuitous path. Through decades of war, around the world and as it touches the lives of families to its exciting climax. The trajectory of a bullet, then, may never be as straight forward as it seems as the reader learns in this exciting tale of one bullet’s journey to its fitting end. Matheny keeps the reader’s interest as he takes the bullet on a path that only a good storyteller can imagine—and make believable. The reader must get to the very end of the book to grasp the importance of one single bullet in the life of those who have survived its history.

“Captivating read with different adventures the bullet experienced. I felt compelled to read the next adventure to find out where it would take the bullet and who would next receive it.” —Captain Plyde P. Marsh II, GAARNG, GAANG, USAFR Retired “A compelling and original read that will resonate with many.” —Kathleen Long, USA TODAY Bestselling Author “Each page makes you want to continue following the journey. I hope you are planning The Bullet II”. —Chief Mike Burns, Macon Police Department (retired)

After a long and successful career in the pharmaceutical industry, Gary retired and began writing. In 2010 he published his first book If the Shoe Fits, Wear it: The life and Times of a Shoe Salesman. His blog, “Life Happens” has gained popularity on the social media scene, attracting audiences worldwide. His love for the mountains inspired he and his wife to move to the east Tennessee area recently where he spends his time writing and playing an occasional game of golf.

Gary grew up in Macon, Georgia. He and his wife have two children and six grandchildren. He is an author, speaker, and a consultant through his company onTRAC Motivations.