Emerging From the Matrix 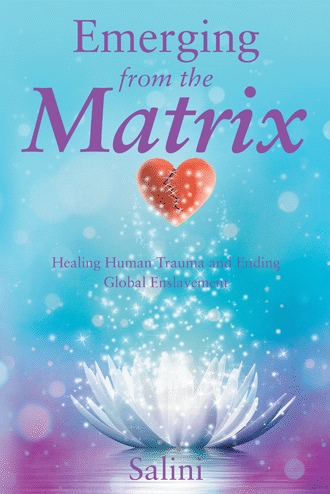 I saw many chunks of disturbing experiences. I was removed as I observed these scenes. As I moved through these memories, they came together as a shocking story….a story I didn’t want to know. But it was true, it had happened to me. And the time has come to tell it, because I saw that it was happening to millions of children all over the world. I was one of the lucky ones who escaped and healed myself. I needed to return and help those I could. And so I let the truth emerge.

As the puzzle took shape, I realized that I had been taken into a special program. I was maybe 2 years old. This program was run by a secret society and was conducted in secret locations. My father was a member of this society, as was his father and grandfather. …

… As I remembered it all and saw how people are programmed, it explained many things to me. And as I understood, my anger and pain began to lift. I prayed for all those who participated in such evil, abusers and children alike. I knew they were acting out some ancient ritual that had likely been done to them. I knew I had been allowed to experience this to be able to bring healing to others. I believe my father was also an early programmed child who likely also experienced trauma-based mind control. It helped me to forgive him and begin to forgive it all.

Somewhere around 2 years old, I was taken into the MK-Ultra trauma-based mind-control program* at several gathering places somewhere in San Jose, California where I was tortured. The existence of this program was verified by many individuals from various government organizations including Astronaut Gordon Cooper, who was one of the original seven Mercury astronauts. It is estimated that 30 million people walk among us today who have been tortured and mind-controlled in these programs. And those are the ones still living. This is no longer a secret as many former child victims like me are now coming forward with their stories. Many of them have yet to be de-programmed and have no memory of what happened to them.

My father took me to these trauma-based mind-control sessions. I was too little to know where I was taken, only that it was a dark room somewhere, sometimes a graveyard, other times a basement. I was subjected to ritual abuse, which is an extreme and severe form of steady controlled abuse intended to destroy the spirit and separate you from love and life. Breaking your soul’s connection to God is a prime objective. If they can do that they can control your mind and soul. As the shattering began, the very structure of my mind, body and soul was being rearranged. It was painful, frightening and chaotic.

I was selected for Beta programming*, or sex kitten programming, to be trained in sexual slavery and related behaviors to be used as a sex slave. I was traumatized and abused into submission. This part of the programming lasted for several years before being taken to the next level. After that, I was taken to special classes for intellectual programming, enhancing brain power, memorization, speed-reading, etc. Their goal was to create a SuperGirl – sexually hyperactive and beautiful, like Barbarella, with extremely heightened mental skills. I was expected to remain thin, fit and beautiful at all times. I was constantly harassed about my weight and appearance. The classes were sporadic, especially as I grew older, but continued until I was 16 or 17 years old. By then, I did not remember the Beta sex slave programming because terror is such a big part of the trauma-based conditioning. Terror induces amnesia. Most of it occurred when I was small, so the terror is what I felt and what kept me in check. The greater the trauma and terror, the greater the amnesia. In fear for your life, your brain reverts to survival and experiences are split off and compartmentalized, to be held in an inaccessible block of memory cells, much like your computer hard drive. Once your will is broken and partitioned off away from your daily persona, a submissive, compliant behavior takes over so you can survive the encounter. If this happens often enough, the compliant persona becomes the dominant one. Any rebellious behavior is met with harsher and harsher punishment. Such is the programming of slavery. And that is the goal they are seeking, total compliance, total obedience.

My father was not mentally stable enough to advance in the ranks of the secret society order. To become one of the people they choose to move into positions of power, you have to be able to behave calmly and rationally on a daily basis. Dad’s mental illness made him unfit for this and turned out to be my saving grace, along with Mom’s spiritual training. Dad eventually fell away from the program. The last class I took that was part of the mind-control program was a Speed Reading course during high school. My father was always present with me guiding the programming. All the other student’s fathers were there too. Every student in those classes were products of the MK-Ultra trauma-based mind-control program. And there were thousands of us across America. All innocent, beautiful, talented, trusting, brilliant sons and daughters of the collective mind controllers of our time. Our power, gifts, goals, minds and freedom were being stolen from us slowly without our knowledge. And soon...we would become the future leaders of America. The people running America today.

But that was only one half of my childhood. There was another half, and it was filled with the initiations into light, healing, love and forgiveness. Despite the insanity of my father, my mother managed to mentor me into her spiritual path. By the time I was five years old, I was healing and meditating. Mom taught me that my hands held powerful energy that could heal things. We began with animals. I remember taking my sick turtle into my hands. He seemed to get better. Or the day we found our fish floating sideways. We both put our hands around the bowl; she recovered and began to swim again. Soon, I began to believe powerfully in my ability to heal, to restore and to bathe everything in God’s love and light. I worked on trees, bugs, plants and strangers coming to the house, anyone and anything I could get my hands on. As I practiced these things, I learned to soothe my own pain and suffering. I became my own first patient in what would become a lifetime healing career.

Mom was a practicing Zen Buddhist. She taught me to meditate and still my mind. I was five and I was on the roof meditating like that. My sister gave me Bible instruction. We read the Bible every night and she would explain who Jesus was. I wanted to know how Jesus performed miracles and healed people. If he could do these things, why couldn’t we? Didn’t Jesus tell us that we shall do greater things than he did? She never had an answer but always encouraged me to keep trying to find out and to pray to Jesus. She and Mom taught me to pray and I created the most beautiful prayers imaginable to protect me. Since we lived next door to a Greek Orthodox Church, I would often hide there, praying to God to relieve me of the suffering and to heal our family.

But the greatest thing Mom brought into my life was Reiki Grandmaster Hawayo Takata*. It was Sensei Takata’s constant healing treatments, attunements and spiritual guidance that got me through those painful years. Nothing deterred my mother from seeking God and exploring metaphysical teachings. She held classes, brought in healers and shamans, and in general created a mystical atmosphere at home. It was her saving grace and the pathway she gave us children out of Hell. But I was the only one to seize it.

For now, I lived within the apartheid of my soul, separated from my spiritual grace, unaware of my gifts and spiritual power. Even then I knew I had to survive it. I had more important work to do someday. And that day has arrived.

“This book is a ‘must-read’ for anyone with chronic illness and a history of trauma. Salini’s heart-felt words and sharing of her long and difficult journey gives us all hope and truth that we can all heal from trauma, no matter how severe, with the inclusion of positive thought and knowledge of higher forces leading us on truly spiritual paths.”

This is a true chronicle of powerful lessons learned at the hands of dark power while tempered by the forces of light. Salini is a secret society daughter born into a dark, global organization of domination, hatred and violence, yet through her mother she is also the heir to a powerful legacy of female healers and shamans hailing from a long lineage of love, light and awakening. Salini was forced to reconcile the two together to prevail, alchemically bringing forth a great healing power to alleviate humanity’s suffering. These are the lessons she learned both as a sex slave and as an initiate into love and healing. This is who she became in dying and resurrecting herself. And this is the healing she offers for those still in bondage.

Salini is a ReikiMaster, author, counselor, shaman, visionary, global activist and truthspeaker. She walks the path of the Divine Mother to love and heal humanity. She brings the mystic’s true vision and the healer’s heart into our world to balance and heal it, transforming everything wherever she goes.