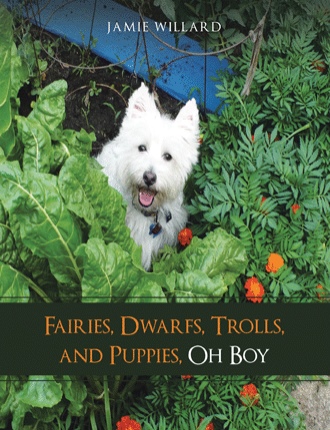 "Angus does sound like the name of a black cow; but it is the name of a little black Scottie dog. Angus lived in Scotland for two years with his owner, Mary. Angus loved to run free in the country side especially in the summer when it stays light until almost midnight . Mary and Angus would go walking throught the heather in the evening light which is called roaming in the gloaming. One day Mary got a phone call that would change everything. She was called back to the United States because there was worry that all the computers would crash when the year 2000 rolled around. Mary had been able to do her job from Scotland and just fly to the US occasionally to fix other small computer problems. The next few days were spent packing and this caused a problem for a little kitchen fairy"

The fairy stories began with fairy gardens in my backyard.

The author C.S. Lewis and his brother wrote fictional stories about elves and fairies, and we all loved them.

I love the Warwick Goble illustrations C.S. Lewis mentions. We all search for a purpose in our life, and so do the fairies in my stories.

When I began writing fairy stories, I had my friends children read them, and they seemed delighted. The children even gave me ideas to make the stories better. After writing medical articles this was so much fun. I live in northern Illinois. I am a retired data base manager. My grandchildren are now in college. I see the stories everywhere and hope you enjoy them too.