The Story of Goldie Owl and the Three Wombats 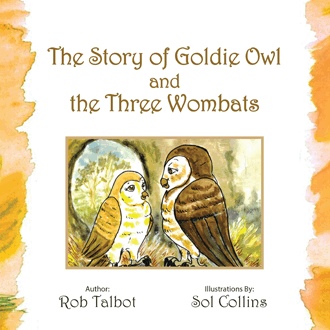 Goldie Owl was a beautiful bird with golden feathers. Most owls are not gifted with such colorful plumage but Goldie Owl's mother once ate a mouse that had lived all its life in a toxic waste dump. One day she laid a golden egg and when that egg hatched, out popped Goldie Owl with her beautiful golden feathers. Goldies later discovered the world but as special as she was, she learned that there are rules to live by.

The Story of Goldie Owl and the Three Wombatscomes from my early exposure to storytelling and my appreciation of native animals, which has been a life-long love affair. The natural fauna of Australia are unique to the world. Perhaps the storytelling from my earliest memory helped me to write as much as I did to defend the native species of my home country when, much later, I became a member of a conservation group and did all I could to protect those natural wonders.

I come from a time before there was television. Apart from reading, there were regular nights spent listening, as a family, to the latest radio adventure. In those days, the imagination was used instead of the screen. My imagination was nurtured from these earliest times, and I am certain the old aunts and uncles (as well as my mother and father) actually enjoyed reading to me, my brother, and my sister. It was not a duty; it was a pleasure. I have a great sense of that even now.

Television silently put the imagination to sleep and gave us what it wanted us to see. Until that time, the images and feelings were projected via the human voice, through wireless technology, to entertain all of us as we sat in the lounge room, hardly speaking. Each of us formulated the scenes we were intended to visualise in our minds. Spoken to envision by human voices, but imagined by us. It was a quieter time, a more relaxed time, in which our minds were working overtime.

I would like to offer full praise to Sol Collins whose fi ne illustrations grace the pages of The Story of Goldie Owl and the Three Wombats. She made the creatures come alive with her art. Thank you, Sol.

Rob Talbot is an Australian father and grandfather, prolific writer, scriptwriter, and poet. He is publishing the stories he wrote for his children more than twenty years ago. Rob has decided that the stories should be shared with all the other children of the world.