No Limits No Regrets

Bouncing Off The Redline of Adrenaline Addiction 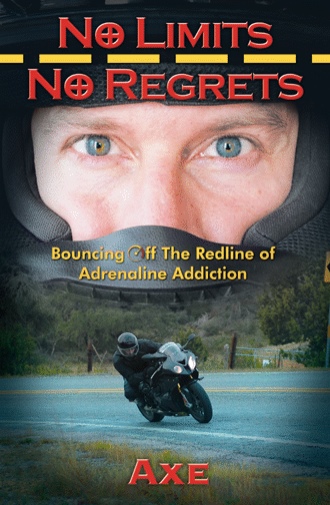 As I watch my form in the mirror and throw one punch after another, “Afterlife” is playing by A7X on the MP3 player. I find myself looking at that guy in the mirror with some kind of unexplainable anger toward him. For some reason, I feel some kind of autoschaddenfreude, as if I can’t wait to watch him suffer on the ride. The combination of sleep deprivation, mental preparation for this ride, and intense music have my brain swirling in a mix of anger, excitement, pride, and even despair. I know this is going to be dangerous. I know that even under the most ideal circumstances, it will still be a painful experience, but I feel almost helpless as I stare at that guy in the reflective glass like he’s now a separate entity residing in that mirror. He’s the adrenaline junkie that forces me to do these things. I may not want to do them. I may know as well as those around me how stupid it is. Like Lucifer, he doesn’t control me but offers the temptation and lets free will decide. He might try to push me to do what he wants no matter how destructive it might be. I also have the other option of defying him and being punished by him later with unrest while my ability to be happy with my daily life erodes. I can’t control him, but I’m not sure that I even want to stop him. Admittedly, I enjoy it too despite all the reasons not to succumb to his ridiculous taunting and misguidance. I know this addiction like any other ends one of four ways. Either I learn to control or suppress it, I replace it with another addiction, I continue giving in to the growing destructive hunger on a path for destruction, or I resist it and it spirals out of control and destroys me from the inside. I’m not sure if a person ever truly eliminates desire or just adapts to be able to control it more. Right now, it’s all irrelevant. I am doing this. I am giving in to the person in the mirror. The addiction wins this time due in part to the fact that I want him to win. Like I told Pick and his uncle, ‘I’m coming out of this dead, jailed, or legend.’

Axe doesn’t suffer from addiction. He relishes it. Ever since an open heart surgery tested his metal, everyday challenges just haven’t been enough. Despite living the good life in Texas, his girlfriend, Sunshine, knows as well as he does that no matter how happy Axe might be, he’ll always have demons inside to battle.

He trades his current ride, the Goat, for its steroid-pumped younger cousin, the Cadillaxe. After equipping the triple black beauty with mirror-mounted radar detection and thermal vision, he takes a test run to Colorado and back. Next he finishes building the most exotic chopper of his career and rides this chrome steed to Daytona Beach. But neither of these vehicles or trips are enough for his insatiable need for adrenaline.

Finally, the idea of riding his BMW S1000RR motorcycle from the Pacific to the Atlantic consumes his twisted mind. Axe prepares by modifying the BMW, installing the latest gadgetry, and training. Eventually, brains pass the torch to balls as it becomes clear the task is not intended for the weak or sensible. Through pure determination, the leather-clad biker shatters the record for the fastest motorcycle ride across America.

Axe has spent over half his life riding and building motorcycles. His wide-open-throttle lifestyle has made him an unfortunate expert in self-destructive addictions, including his current unquenchable thirst for adrenaline. Axe currently lives in San Antonio, Texas, with his dog, Baron, and the Cadillaxe, Gripper Chopper, and record-breaking BMW S1000RR.