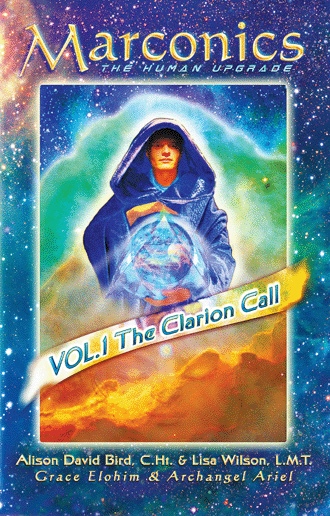 Alison asked me, “Are you ready?”

I climbed onto the massage table. “Yes.”

As she stepped in to my energy field demonstrating ‘the Crowning’ for the class, my head was suddenly flooded with Light. I was undulating, spinning and vibrating. I felt the intensity of the energy as it slipped in through my crown and traveled down through my physical body, rippling as though serpentine in motion. It was beautiful and so complete I didn’t know if I could contain it. I had the feeling of being filled to overflowing. In that moment I was receiving my Liquid Light Self. And when it was over I felt ecstatic and excited and full of love.

A Message From Our Sponsors.

“Hail traveler, I have waited for you. We have walked this path together you and I, and now the roads diverge and we must take the one less travelled.

You mapped the route before you came and left markers along the trail as reminders of your mission, but you grew weary on the journey and seeking shelter from the battle you slumbered too long in the sun.

Now you are awakened by a thundering storm.

Have you have forgotten your covenant?” - Grace Elohim, Galactic Federation of Light.

“Some run a slow and steady race straight out of the gate. They are awake from the moment they are born. They can see the thinning of the veil, the filmy layer of deceit and mistruths that form the illusion of their reality. They choose to view the world differently and are not afraid to be called out by others because for them, the TRUTH is all.

Some take a while to gather themselves, like sleepy teenagers who shuffle back and forth between the kitchen and the back bedroom rarely raising their heads until something ‘shiny’ takes their attention, then somehow they muster the energy to ‘party until dawn’. These individuals awaken late in the day but sprint to the finish.

Then there are those who repeatedly hit the ‘snooze’ button until they are finally galvanized to attention by something cataclysmic that force them to cry out: ‘Why Me?’ For them, Spiritual Awakening is more like a blow around the side of the head with a two-by-four.

If your life had been perfect the likelihood is you wouldn’t have been moved to ask the challenging questions, like: ‘Why?’ and: ‘Who?’ and: ‘What the heck?’

But you’re awake now and it doesn’t matter how long it took you, or how you stumbled on the path, because in the end you showed up.

You should be joyful, because this is what you wanted.

Before you came here you left strict instructions with your ‘service,’ to wake you. You said: ‘Whatever it takes. Don’t let me sleep in. I don’t want to miss the end of the world.’

And so you heard The Clarion Call.

You are the Lightworkers, the Indigos, the Warriors and the Wanderers, the Wayshowers, and the Starseed. And here we are, you and I, and we have the best seats in the house.

The first thing you need to know going forward, is that nothing will ever be the same again. Embrace it.

The second thing is, you have no control over anything. You never have. So, let it go.

Project Earth is nearing completion. Scratch that. It is all over bar the shouting, as they say. We are just waiting for you to catch up as we suspend reality while you progress along a linear time line.

Time is not linear, you see. Time is quantum. There is no past, present or future, there is only this moment. Everything is happening simultaneously in the eternal ‘Now’.

Picture a clock on the wall, but the numerals have been replaced. Instead they read: ‘Now’. And now it’s ‘Now,’ and in a moment it will be ‘Now.’

Essentially you have lived for the last 2,000 years on your planet in a cosmic fish bowl. You are as dependent on unseen forces for your survival as a gold fish would be on the child that feeds it.

Who are these unseen forces?

They are you. They are US. When in form, WE can become the ‘many’. When in Spirit, we are ONE.

We are all Angels, messengers of God/Prime Creator, or, if you prefer - manifested expression of Creator energy - carrying out Divine Directive in a Universe of Unconditional Love.

We, the Elohim, are the Creators within your Universe’s 12 Dimensional structure though there are many more Dimensions above those and many Creator energies beyond that.

For the sake of simplicity we will refer to ourselves here under the umbrella term of The Galactic Federation of Light (GFL). Every life form in this Universe is represented here, either as an invited member who has become enlightened enough to play an active role, or as an observed member, like Earth, a species who is carefully overseen in the process of its evolution.

We speak on behalf of The Founders: The Elohim - Creators of every other planet and all manifested and incarnated Beings in the Multiverses, The Seraphiam - an Archangelic Order, The Guardian Alliance, and such planetary intermediaries as Ashtar Command.

Within these organizations exist every personification of Spirit that you are familiar with through your scriptures and spiritual teachings; Buddha, Jesus, Gandhi, Quan Yin, Mother Mary, Krishna, The Ascended Masters, The Cohans of the Rays, the Angels and Archangels, St Germain, George Washington, JFK, John Lennon, Steve Jobs, and wait for it... yes, YOU!

And for the last 2,000 years, they have been your ‘sponsors’ and your protectors and have taken an active role in your phased evolution.”

“Now, it’s time for certain truths to be revealed and if you weren’t intended by your Higher Self to hear these truths, you would not have opened these pages.

“I am the Avatar Grace Elohim, and this is the time of the Avatar Race. The Oversouls that volunteered to assist in this project, incarnated a portion of their energy within your planet’s time matrix and have aspects of ‘Self’ within every harmonic bandwidth/density or Dimension up to Source.

Higher aspects of ‘Self,’ residing in these other Dimensions, will merge within the biological vehicle in a progressive integration of identities from every Dimension, including the Oversoul in the 7th, 8th & 9th Dimensions, and the Avatar Identity in density four: Dimensions, 10, 11 & 12.

This merge is referred to as ‘Sovereign Integration’. You are returning to Source Energy, or, the Galactic Core. This is how the return of Christ Consciousness will be experienced. This is the I AM Merge.

The role of the Grace Elohim at this time is as expressed in the vibration of the word “GRACE”. She is the Redeemer of Souls.

The Elohim and the Seraphiam and the Violet Light have provided a mechanism by which the fragments of ‘Self’ can be reunited within the incarnate Being, but without the destruction of the biological vehicle. This process will be rather like stringing together a necklace of pearls, on a chain of identities up through the universal harmonic structure.

This is how Ascension will be achieved.” 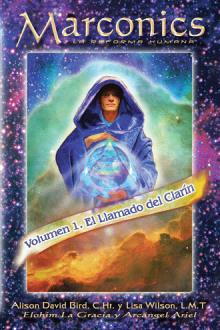 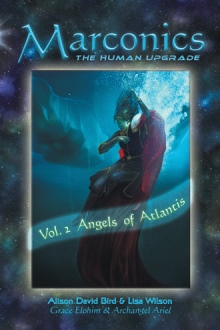 Marconics – The Human Upgrade, is the story of a new multidimensional energy system that arrived on the planet at the end of 2012, marking the final phase of an operation by Galactic Founders to conclude the evolution of the human experience.

This is the Clarion Call,

as all Spiritual journeys will culminate with the Ascension of mankind

out of the limited belief systems and paradigms of fear

that have enslaved humanity in the density of the material realm for eons.

All will pass through the Karmic Gates as free souls,

to traverse space without time, to create new realities with limitless potential through higher love and compassion.

The Spiritual Hierarchy is interceding to assist the many who struggle to maintain their own higher vibrations in Earth’s planetary ecosystem, which has been disconnected from Source. Marconic Energy Practitioners are the ‘Gate Keepers’ and will facilitate the rapid integration of multiple bandwidths of harmonic resonance, or Higher Selves, within the human form, as our own Soul Identities descend to meet us on the Rainbow Bridge to guide us back up through the Star Gates to the Ascension Path we lost when Atlantis fell.

Deities are returning to Earth to blend with their individualized incarnates; Spiritual Teachers, Guardians, Angels and Ascended Masters are integrating with their human counterparts in the Birth of the Avatar Race.

The Avatars, Grace Elohim – Redeemer of Souls, and Archangel Ariel – Creator of Worlds, have returned, under Divine Directive, to gather the lost souls of Atlantis and return them home to Source.

“As they move through the karmic Gates of Ascension towards Event Horizon it is left to you, our Gate Keepers, to ensure the progressive integration of higher harmonics which will raise them up like chariots and deliver them home.” - Grace Elohim

British born Alison David Bird, C.Ht, and American Lisa Wilson span 20 years of Spiritual Metaphysics and energy healing between them. Together, they carry the Mission of Marconics - The Human Upgrade worldwide, training Marconics practitioners and teaching Spiritual Alchemy and Ascension Mechanics. Both live with their families in Massachusetts.