The Truth About ADHD 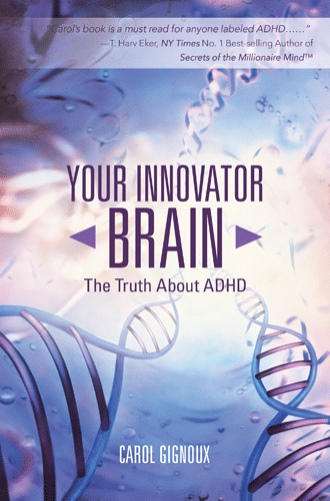 My preview text is: PART 1: THE INNOVATOR BRAIN This book is unlike any you have ever read about what is commonly referred to as Attention Deficit Hyperactivity Disorder or ADHD. I wrote it not only with the specific intention and hope that it would be a “game-changer,” but also out of profound compassion and respect for the millions of people who have been diagnosed with, treat, teach, counsel, or have family, friends or partners with ADHD. Constantly shifting between multiple name changes and agreement on symptomology, I believe that the psychiatric field has never handled ADHD adequately or fairly. Historically, this categorization or label has dwelled too much on the behavioral side effects of ADHD, rather than looking closely at its fascinating cause: a brain with faster processing speeds. A ‘diagnosis’ of ADHD is in fact only one aspect of what I would call a brain type: the innovator brain. This book argues that the current pathology-focused and one-dimensional label of ADHD obscures our full recognition and appreciation of the complex and whole individuals who posses an innovator brain. I invite you to consider that we can understand the gifts and challenges ADHD more holistically when it is approached from the perspective of a brain type as opposed to a narrow disorder or disability. Men and women with ADHD past and present are arguably some of the most brilliant, inspired and creative people who have walked the earth. However few of us would recognize them for their ADHD disorder, but rather for their genius derived from the blessing of an innovator brain. Here are just a few of these highly original individuals who employed their fast processing brains toward magnificent ends: Pablo Picasso, Leo Tolstoy, Robert Frost, Ludwig van Beethoven, Charlie Chaplin, Whoopi Goldberg, John Lennon, Henry Ford, Isaac Newton, Jonas Salk, Carl Jung, Nelson Rockefeller, Walt Disney, Dwight Eisenhower and Steve Jobs. (Choose 5) PART 1 of this book begins by examining the current problematic definition of ADHD and its implications for ‘patients’ and the professionals supporting them. This section then goes on to juxtapose traditional approaches to ADHD with the very different approach of understanding and harnessing the gifts and challenges of the innovator brain type. Chapter 1 explores typical approaches to the treatment and understanding of ADHD concentrated on disability and disorder. Currently, it is generally accepted that the ‘ADHD’ brain is neurologically impaired and therefore little can be done to improve it. Medication may help someone focus better, but essentially the die is cast. What I am here to say is that after working for almost 40 years with hundreds of clients of diverse ages and backgrounds, I have had a dramatically different experience of supporting people with ADHD. It is based on this experience that I offer my alternative approach to ADHD— providing a “user’s guide” for the innovator brain. I want to be clear that I am not saying that people with an innovator brain are entirely free of behavior management issues. Lack of necessary behavior controls and the consequences of not sufficiently balancing one’s gifts and challenges, is after all the reason people were labeled ADHD in the first place. Instead, I am suggesting that the unique approach and support of this guide as opposed to the more traditional ways of ‘treating’ ADHD. My protocol facilitates someone with a magnificent innovator brain learning to tap into their brain’s amazing resources with the result that their achievements outshine their behavioral limitations. Everyone diagnosed with ADHD has been confronted by its ugly stigma. In Chapter 2 I address this burden head-on, empowering my readers to redefine the expectations placed on them by society and themselves. Finally, in Chapter 3 I discuss my personal and professional journey spanning four decades from being an ADHD child (then called “Minimal Brain Dysfunction”) to becoming a successful business owner, coach, and speaker on the cutting edge of the ‘ADHD’ industry. After working for almost 40 years with hundreds of clients of differing ages, I have had a dramatically different experience. I have seen people with this brain type display considerable strengths and talents when given the tools and the confidence. In my experience, they people diagnosed as ADHD when exposed to the protocol I have developed come across more as gifted innovators than mentally and behaviorally challenged misfits. From my well-honed perspective, categorizing and labeling people with ‘ADHD or Attention Deficit Disorder’ is responsible for reinforcing weaknesses and promoting negative attitudes and perspectives both on the part of the person being identified and those with whom he/she interacts. This diagnosis becomes a self-fulfilling prophecy that in turn justifies the label: ADHD. Yet I have witnessed people over and over again break free of the ADHD stereotype after seeing themselves from a gifted and talented perspective. They were able to gain a new vision for their life, their true abilities, and the confidence to succeed. In moving away from ADHD label, I will explain how I came up with the new label of innovator to describe this brain type. I will explain how ADHD really does mean innovation by using historical and contemporary examples of people, their accomplishments and their struggles. It is critical to understand why we are wrong about the label ADD or ADHD to describe this brain type. It is important to remember that if we continue to define people using a label that makes them less capable than others, they will struggle to believe in their ability to overcome their challenges. I look forward to beginning this journey with you!

This is the story of how I discovered The Innovator Brain as a breakthrough for people incorrectly labeled ADHD. It’s a guide to living a fulfilling, confident life through understanding the true nature of one’s talents and strengths.

Carol Gignoux is a pioneer and expert in the field of ADHD. For forty years, she has counseled and coached hundreds of people, including executives, couples, college students, teenagers, and young adults. With a master’s degree, coaching and research, Carol has discovered that ADHD is really the “Innovator Brain Type.”