You Don't Need a Good Camera to Take Good Pictures

by Debra A. Ruby 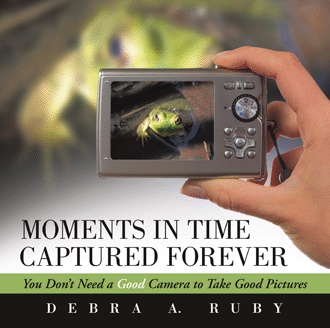 
I have always loved photography, even before I had a camera in my hand. I observed everything all the time that my family and friends rarely noticed until I pointed them out. I love experiencing amazing and unbelievable moments in nature and in life, especially through my travels. Traveling is a passion of mine that naturally lends itself to photography and wanting to capture and preserve what I see in pictures. The wonderful aspect about still photography is that I can go back to those moments anytime I want and enjoy them over and over again.

Early in my life I learned that the type of camera doesn’t determine the quality of a photo. The photographer, lighting and framing of the image are what really matter when it comes to taking great pictures. How many times have you handed your camera to someone to take your picture at a famous landmark, only to find your head or some other vital part of your body cut off?! Some memento! My Uncle Zeke consistently took good pictures using ordinary throw away cameras from the pharmacy. The most technology on those cardboard boxes was a flash that you had to turn on in order to use – if you remembered. Being the family historian, Zeke taught me the value of gathering everyone together and how to frame them to create the best composition for a group photo. Over the years, I have taken over the job of family historian, and was able to practice on my not so patient family. I wasn’t so quick to take snapshots. I prefer to take my time, which is why I love photographing flowers and nature so much. They can’t tell you to hurry up!

This book began as a collection of my travel photos that had stories behind how they were taken. It grew into more and more pictures from around my neighborhood that also had stories behind them. Then I realized I could share what I learned from each photo in a story without getting into all the technical stuff you can find on the Internet or in other photography books and classes. My book is for the person who wants to learn how to take better pictures while reading cute stories instead of an instruction manual. Although, the instruction manual is a vital part of the camera equipment, it can get dry. This book is not instead of, but in addition to, the instruction manual.


Give credit where credit is due. And, take your time. If the subject, in this case a frog, poses for you, take the time to photograph every angle.

My cousin and I were out at a park with her friend one day and she spotted this frog. We all came over to take his picture, or two. I stayed with Mr. Frog while they went off and photographed other things in the area. Later, after my cousin saw this photo, she wanted credit for it because she found him. No, I don't think so... I took the photo, so I take the credit. But, she found him, so she gets credit for finding him. I couldn't have taken this picture without her, so thank you.

I was still figuring out how to use my new manual camera and zoom lens and didn't have a tripod with me, so many of the pictures were blurry. Disappointing, but luckily, there was this one and a few others that came out clearly. Take enough pictures, and something is bound to come out. Be patient with yourself and be persistent until you get the shot you want.

Mr. Frog was such a great subject. He kept still long enough for me to take a picture or two in one pose then he would move and pause again. He posed completely under the leaf, partially under the leaf, one leg showing through the water, and then both legs showing. It was amazing! It was as if he was a model asking the photographer (me) how to sit for the best shot. Mr. Frog was talking to me; "How's this? Or this? What about this? I could do this too. Does that help?" "Yes, thank you," I thought.

There was a spider on top of the leaf over his head, but he didn't mind. There were two other spiders on a neighboring leaf, so I did take a break from Mr. Frog to photograph a couple of other subjects, but mainly stayed with him. I could have stayed in that one spot all day taking pictures with the changing light. Before leaving we thanked Mr. Frog for being so cooperative. He has long since forgotten us, but I won't forget him.

Have you purchased a fancy, high-priced camera and have no idea how to use it? Have you read the instruction manual for your camera three times and searched the Internet for tips, only to have your pictures turn out mediocre? Do you think you need the best and most expensive camera and lenses to get that perfect picture? Moments in Time Captured Forever: You Don’t Need a Good Camera to Take Good Pictures can help! Through short stories, Debra Ruby shares her personal experiences and lessons she’s learned while developing her skills as a photographer. She wants you to benefit from her trials. In this book you’ll learn that: • mistakes sometimes make the best pictures; • photography rules are made to be broken; • cropping can be a miracle cure; and • pictures happen naturally, so don’t force a photo opportunity. Whether you’re a novice or an expert, you’ll enjoy perusing Debra’s photos from around the world and reading the stories about when, where, and how they were taken. Have fun! But be careful—you might learn something when you aren’t paying attention.

Debra Ruby graduated from UCLA with a Bachelor of Arts degree in English and earned her Masters in Education from Pepperdine University. She is a world traveler, writer, photographer, and teacher. She lives in Orange County, California, with her husband and can be reached at rubypics@aol.com. You can also visit her website: www.DebraRubyPhotography.com.