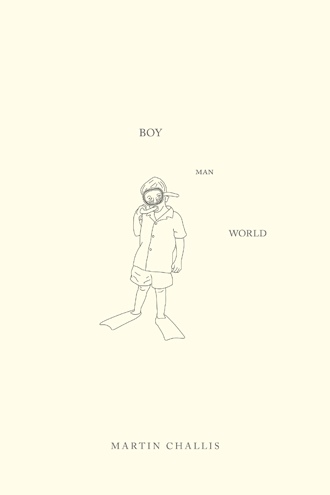 Boy Man World. The boy in the world will wonder The man in the world will strive The world in the boy to open The world in the man to thrive Boy Man World is a collection of poems, reflections and lyrics written over the last two decades, with one or two from earlier days: they are offered here as observations, contemplations and stories for you to enjoy. With love Martin An Invocation The un-discovered country; in his eyes when he praises you. He attempts to hide the nervousness as the rate of his breathing increases. His father never gave him praise. Never gave him glory. Never it seems, made him the special centre of the moment. And yet now he works this gift for you, does so with no experience. Is motivated by the desire to see you grow. To see you swell with growing. He stumbles over foreign land. A son: your father. Not measured by calibration. Not perceived in weight or wonder but as hard stone, the slow carved mark sharpening on unborn generations. You walk with him. Your hand in his. The path new, but well worn with wishing. This image is an invocation: Father and son, two friends like fire, like kindling, like warmth If we imagine this for many sons and for many fathers perhaps it will not be so much further off. Saigon Battle Children 1972 While I was learning to savour the new taste of cashew and walnut in the autumn of that year you were learning to eat the bones of your neighbours dog as you fled from an earth gone moist the leaves of war were torn from the jungle as a cavalry of shrapnel burnt away the air you were learning to hold your breath while I was doing the same in a suburban swimming pool when the dust of your family filled the lids of your eyes being left to see for yourself held quite a different meaning while your skin seared from the heat of warfire I was feeling the warmth of a shopping centre in winter when you went without feet, a landmine exploding your underneath world underneath I sprained an ankle at basketball the words of an American god spat forth from an automatic weapon and you saw the tongues of the lamb inviting you to feast in a foreign language and when I drew in crayon on the kindergarten wall you were drawn in the crosshairs just before the smell of cordite 2:15 PM Roma Street Sunday Afternoon the three of you waving your brave little hands smiling love and mischief at me through the tinted glass of the big green bus I’m standing tight to the kerb screaming at the concrete as I smile and wave back with gusto ‘I love you‘ mouthed in silence ‘have I failed you?’ a silent question I wave until you’ve turned the corner - gone in a juggernaut like stolen children the street where we laughed only a minute ago now more empty than a new coffin I walk back to the car knowing that we will go through this again and again every time you visit for the weekend He Was Big On Tea A little empty that morning she sat on the top step of the verandah sipping tea, sipping thought. Three steps down to the pavement squares of sandstone lay in even handed rhythms; flatly refusing to contour. He’d moved away last week; big bloke, big smile could clasp four pavers in one hand, laid the lot inside ten days, maybe a record, who could say. Completed, the pavement was now empty of him, no more scraping back, no more chipping out, no more broad smiling hands reaching for her cups of tea. She missed this, as she missed the slightly flat renditions of ‘midnight oil’ and ‘fleetwood mac’, the cock of his straw hat and the farewell call of... "see you sometime in the morning suze..." (always at exactly 6.30 a.m.) He was big on tea, said he was glad to meet someone who knew it wasn’t merely the dis-colouration of milk. She’d smile at that, he was right, things like tea were best, given time to infuse. She sipped her tea, sipped her thoughts and the deeper taste that came with a little time. Away to the Silence As the fire subsides into furnacing embers And the ocean's voice washes in from across the field, making ready for sleep you offer a glass of peppermint tea and wish for us a restful goodnight. In evening's air, at night time's breath, we sip and without word listen: to crickets rhythmic and persistent as they chorus out at the perimeter of shadows and stars, to the gentle ones at rest on their perches each with an eye on the moon who call or croon at irregular intervals, to the ageing house who creaks unevenly as she shifts her shoulders from one side of night to the other. Then with a gentle kiss and a last wish for good night we turn to ebb away to the silence away to our sea of sleep. After Cutting Timber at the top of the hill I waited for you not long enough for the magpie’s wing-feather to fall from the conifer and then your silhouette along with the sunset struck me and drawing closer your smile drawing closer Sweet Man For Dan Some stars are set free to come live with us Some live with sadness thinking they do not shine in this heaven sweet man you are not abandoned you are formed in the shape of brilliant light you are brilliant life in the visage of life a free heart brother cry not your river your brothers steady you in their rock arms and in turn, you are the expression of this

“Upon hearing Martin Challis’s poetry for the first time I started singing. His words are beautiful – they evoke wonderful imagery in my head and inspire me to write melodies - a true gift! His words were the inspiration for my first album with my trio elixir and are still some of my very favourite words to sing.”

The poet Denise Levertov once said: ‘Insofar as poetry has a social function, it is to awaken sleepers by other means than shock.” For me, reading Martin’s poems wakes me up, again and again, to the gifts of humility, wonder and paying attention.

I wonder if the name Martin from the name Mars could not be much further off ? Oh But Yes! For he is a ‘Warrior of the Heart’! In our world of striving for achievement, for excelling, for doing, for measuring ourselves against this expression of our Yang... Where is the still simple place of knowing of being rather than doing? Through his poems the edges, the far shore, the liminal ‘perhaps it will not be so much further off ’.

Martin lives in Northern NSW with his wife Jan. They have six wonderful flourishing adult children between them. He is a poet, an actor, a teacher, a facilitator and personal and executive coach. Martin has a deep love of the natural world and a life long passion for learning.