Living in Freedom & Love Without Conditions 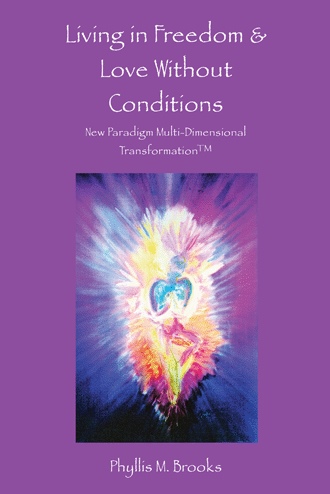 Traveling across the country with practically nothing left in my bank account seems like a leap of faith, but when I took off for Mt. Shasta, CA in September of 1998 I didn’t think of it like that. I felt that at last I was grabbing on to my destiny. I didn’t put it into so many words, or even concepts at the time, but I knew that I had to go to this workshop. There was no question at all about that. I’d known since April, when I first heard about it and met John Armitage. This was where I was supposed to be.

The venue presented a daunting juxtaposition of contrasts. We were in a beautiful 10-sided space with views of Mt. Shasta. Across the street in one of the other directions was a white church. Across to the other side was a church painted black, even the windows. I now feel that this was an omen that we would need to exercise discernment at all times.

The 27 participants were a strange mixture from many lands. How did they all find out about this class, and what drew them? I assumed they had been called as I had, that they had listened to that small voice inside that said, “GO!” This was true for at least some, and they became my friends.

The facilitators were also a strange duo. They didn’t seem to get along very well, which wasn’t surprising since they seemed to be exact opposites in many ways. John, the one I had come to learn from, was an Englishman. He could channel other dimensional beings as easily as have a conversation. He wasn’t egotistical about this, just matter of fact. He told us some amazing and sometimes frightening things about our world, but always I felt he spoke truth. He believed with his whole self in freedom, and he told us not to give our power away to anyone, even him. Gary was bombastic, egotistical, and controlling. I later found out power was the main thing he was after, as much as possible from as many as possible.

So the week was one of contrasts. We listened, went on amazing etheric journeys and had adventures with the beings from Telos, Australian medicine people, our own higher Selves, and others. We hung out in the copper-tube stargate built in the center of the room. We released, released, and released some more—at least those who were willing to release. John told us that energy moved when we told it to, and we began to believe him. We changed. Master Germain warned us at the end that we could not expect to go back and just take up our lives where we had left off. One man had dream before he left home that he wasn’t going to return; he was afraid this meant he was going to die during the journey. He realized by the end of the workshop that he was not the same as when he had come, so the old “he” was NOT returning. The 9 days was a rebirth of sorts, a birthing into our true Selves.

Germain also revealed on the last day that we had been on Galactic TV, so to speak. Beings from all over the universe were watching us. We were experimental guinea pigs. They were watching to see what would help humanity to grow rapidly, to raise their frequency to the levels necessary for ascension. I laughed at finding this out. The old me might have been upset at such surveillance, but the new me was delighted to be of service, and filled with joy and light.

The feeling of euphoria lasted about 2 weeks when I got home, but the changes continued, and do continue to the present. Master Germain, John Armitage/Hari Baba, and all of the “Upstairs Department” as he calls them, have taken us, through the subsequent years, on a fantastic journey into ourselves. I would not have missed it for the world. And yes, I believe that I was destined for this journey, that I signed up for it before coming in this time around. I feel blessed to be a part of the New Paradigm MDT continuing program to connect humans to the truth about themselves and their place in the universe. This is an amazing time to be alive. We can ride the wave in joyful exuberance, or we can splash around fighting the current (and most of us do both from time to time). But I have found riding the wave of change to be my goal and my destiny. Baba and Germain woke me up. I refuse to sleep my way through this experience, this wonderful opportunity. I hope that this book will help to open readers to the realities and possibilities of being human at this time, and that they too will want to joyfully jump on the wave and ride it into our unimaginable future.

DON’T GIVE YOUR POWER AWAY TO ANYONE OR ANYTHING!

YOU ARE EVERYTHING IN CREATION NOW. JUST WAKE UP AND DREAM!

Helping people realize such freedom is the purpose of the teachings and energy activations offered to humanity by Ascended Master Germain and the collective consciousness of the multi-dimensional Masters of Shamballa through John Armitage, a.k.a Hari Das Baba, and New Paradigm Multi-Dimensional Transformation.

Phyllis M. Brooks has been teaching New Paradigm MDT (through all its name changes) since 1998. She compiles and edits all course manuals for the School of Esoteric Sciences, headed by John Armitage. She also does Soul Wisdom remote energy clearings, is a silk painter, and makes and distributes flower, gem and energy essences through her company Taliloquay Essences in the hills of western Massachusetts. www.taliloquay.com