The Biography of Goddess Inanna; Indomitable Queen of Heaven, Earth and Almost Everything

Her Story is Women’s Story 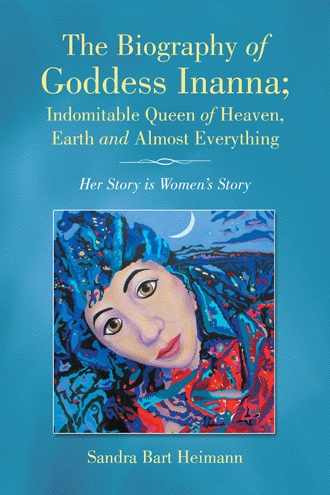 Inanna’s story is preserved: fresh and available as the day a scribe pressed it into clay tablets. Finding Inanna’s remaining intact glory days is an expedition of excavation through thousands of lines, story fragments, and word phrase shards — forensic mythology. I searched for her, for sacred woman, and for the story of woman. I found her in ancient (Near Eastern) poems and texts gloriously naked singing a song to her vulva and then stripped of her supreme status; I found her goddess of every power imaginable and then blatantly usurped, marginalized, silenced. Her name was lost under tons of ruins and blown dust. I sifted through translations and gathered her story; I also found her deep in my heart. Come. Let me introduce you to Inanna, Queen of Heaven, Earth and almost everything. Her story is also woman’s story; she and we are stirring again. We meet again at the well; we tell her story and remember ourselves. Inanna’s known story is recorded three thousand years before the origin of Judaism and Christianity. Her story is archaic and begins in the Paleolithic. She was supreme over all deities. She inspired art, music, hymns, justice and compassion. Her temples, shrines, and sanctuaries numbered twice that of her nearest competitor. While she was strong, so were women.

When stars were many and people few, a great story was told everywhere. The first storytellers were women. Their story was so large it filled the universe — it told of a Great Mother encompassing life, death and return of everything. When Neolithic farming people settled, and depended on plentiful crops and herds, a goddess of fertility stepped into stardom. Inanna is the Sumerian goddess of love, crescent moon, evening star, fertility and renewal. She is the longest lasting supreme goddess of the Ancient Near East. Inanna’s biography includes her rise to supreme holder of almost all the powers of culture and civilization. 5000 year old poems bring Inanna to life. She sings to her miraculous vulva and to her consort-lover; she struggles to keep her powers and complains of her losses and demotions. Inanna represents life’s powerful contradictions. She changes peace to war and back again; she causes strife and brings love; she turns women into men and men into women. Inanna loves all her people, every one. A biography must have adversity and Inanna has plenty; she must always conquer of the ever-rising tide of patriarchal domination in all its forms. Buried and forgotten for two millennia, she now steps from the dust, ties up her sandals, applies her kohl, adjusts her tiara, summons her lions, and returns. Her story is also woman’s story. Let me introduce you to Inanna, Queen of Heaven, Earth, and almost everything

Sandra Bart Heimann earned both a BFA and a holistic nursing certification along the way to undertaking a ten-year self-directed discipline in woman’s studies, the healing properties of creativity, and poetry from the Ancient Near East concerning goddess Inanna, her life and times. The author also painted, taught workshops, and coached women recovering their creative expression from buried potential to color-filled exuberance. SANDRA BART HEIMANN 8/18/1942 -9/21/2015 Beloved Mother, Author, Friend, Artist, Healer SandraBartHeimann.com