Heaven Has No Address 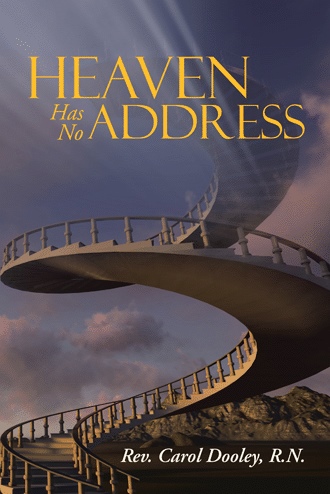 HEAVEN
HAS
NO
ADDRESS

We Are a Triad Being

Acknowledgements
Many people have contributed to my book, both those seen and unseen. Those who are still seen are very dear friends of mine. A long-time friend, Reverend Doctor Kay Robinson encouraged my growth and understanding of the world of spirit. Her patience, guidance and faith in me, catapulted me to where I am today. Lauren Nilsson a former colleague and I shared similar experiences and thoughts that helped bring you the poem in the book. We recognized the importance of the message and the need to get it to the public. I also want to thank Jim and Trish Singleton for opening their home and sharing so many stories and experiences with me. To my twin, Susan Bartlett, I have to thank her for her help with additional proof reading, but most importantly, for her suggestion of the title, Heaven Has No Address, which was given to her by one of her spirit teachers some time ago. We finally got it together.

Dedication
To all the spirit entities, the unseen people, who were my former patients that were gracious enough to allow me to be a part of their journeys and experiences, I dedicate this book. All of their names have been changed to protect their identity. I also want to thank the family members who allowed me to help them understand the transition of their loved ones and how beautiful the process of death can be. I will forever be grateful to all of them.

Reverend Carol Dooley, R.N. was born in Wilmington, Delaware and spent most of her life growing up in Rock Hall, Maryland on the Eastern Shore of the Chesapeake Bay.
Her nursing education began at the Rolling Hills Hospital School of Nursing in Elkins Park, Pennsylvania, and later at the Abington Memorial Hospital in Abington, Pennsylvania. She completed her nursing degree at the Mississippi County Community College in Osceola, Arkansas.
She later moved to Florida where she lived for thirty-four years and worked in surgery at the Tampa General Hospital in Tampa. Changing pace, she accepted a position with the Hospice of the Florida Suncoast, now Suncoast Hospice, where she eventually retired.
While living in Clearwater, Florida, Reverend Dooley studied metaphysics at the College of Metaphysical Studies where she received her Master’s Degree in Theology and became ordained. She later became a spiritual counselor and a certified psychic medium. In addition, she practices alternative modalities such as therapeutic touch, reflexology, past life regression, is an artist and does numerology profiles.

HEAVEN HAS NO ADDRESS

I walked into the store with the sole intention of paying for my purchase and leaving. While waiting in line, my eyes caught sight of a picture behind the counter. The moment I saw it, I knew it had a great spiritual significance, if only to me. I had to find out about it. How could something like this actually be captured? It may be something a person envisions, but to actually see it in reality? The clerk was glad to share the story behind the unusual and captivating snapshot..
The clerk continued by saying,” my mother was in the hospital, very ill and wasn’t expected to live. I spent a lot of time with her throughout her illness, talking about her condition until she became comatose, and our conversations ended. I knew it was only a matter of time before she’d make her transition. I found the doctor and told him to send for me if there were any changes. While I was sitting outside the hospital, a voice said to me, get your camera out and take a picture of the sky. I had no idea what to make of what the voice was telling me and I can’t even say why I had my camera with me this particular day. The sky looked so different, like nothing I’ve ever seen before. Maybe this was what I was told to take a picture of; Gods presentation of something spectacular.
“At the time, the sky was filled with softly, undulating clouds. If they hadn’t been so beautiful and eerie at the same time, I would’ve thought a storm was coming. Anyway, I took the picture, which happened to be the last one, and went in the hospital café to get some lunch, even though I hardly had any appetite. My thoughts were back to my mother. As I was about to place my order, a voice came to me again; I didn’t want you at my bedside as I was leaving. Remember I love you. I knew at that moment my mother had died.”
“When I was finally able to get the film developed, I saw two people standing high above the clouds adorned in white robes. My father had passed away several years ago and what I saw looked like my parents, together again. I didn’t see this when I took the picture. I don’t know how this could show up after I took it, but it did. As much as the picture is symbolic for me, I’ll always have the memory and it seems to be important to you also, so you may have it.”
For a moment, I was speechless; I don’t even remember the clerk’s name, if she told me at all. At that instant, I knew I had to share my patient’s spiritual experiences. I had been with Hospice nine years and during that time I knew certain events were eventually meant to be shared. Why else had I been given the chance to experience these events? I was in the right place, at the right time for a reason. And this picture on the cover will help tell the story.
Those who are spiritually enlightened will hopefully welcome the following material; those who are skeptic will have their own opinion as to the validity or even the possibility of any true existence of any such happenings that they’ll be reading about. This is not only my journey of how I got to where I am in life, or the purpose of the path I chose, but more importantly the portraying of actual stories of my patients that hopefully will serve to open the minds of man. In addition, I’ll explore death, dying, and our eventual transition and journey home; things most people don’t even want to think about or deal with until they’re forced to. While we may or may not leave this earth the way we’d like, we can still make our own plans, plot our own course to a place we have no recollection of, but have passed through many times.
My intention for writing this book has many purposes; to share my patient’s experiences as well as my own with everyone whether or not they’re open-minded, to hopefully bring about a clearer understanding or recognition that heaven and an eternal life does exist, and that we can communicate with those in the spirit world or heaven. And of course, there are other reasons that will become evident.
Growing up I found death had a very different meaning for people. I often wondered during my childhood what happened to us when we die, as I’m sure many others have done and still wonder about to this day. I think this will always be a mystery to many. Perhaps this is due to one’s religious belief or lack of, but there is definitely a fear associated with dying. I tried to rationalize my own fear of death during my childhood. Nothing seemed to work. Was it simply because I didn’t understand it? Seeing the departed shown to the family and friends at a viewing or a funeral may have added to my own fears. I remember thinking to myself, “this can’t be the end of everything. This is so final.” Or so I thought. I didn’t dwell on the finality, this cessation of life until later in my own life.

Many people wonder how their life will end and if there’s anything beyond this life, other than a dark and empty void that many perceive. We as a society concern ourselves with ideas of becoming debilitated or unaware of our surroundings or being alone when we make our final journey. None of this seems as important to me as it once did. What if we knew without an iota of doubt, that there is eternal life for all of us? What would our perception of life be; would it change? I guarantee you, you would perceive things differently. Although I know there is truly an eternal life, I have to credit my former patients for confirming an after-life in heaven, as they told me of their experiences before their journey and after arriving in heaven. I was blessed to have been a part of these magnificent events. Why some people have these experiences and others not remains a mystery. Could it be because their faith in God was so strong and undeniable? Or was it because they had to be shown a glimpse of heaven to alleviate their fear of dying? I only hope I will be afforded the same spiritual blessings when I take my journey home.

Reverend Carol Dooley, R.N., was born in Wilmington, Delaware and spent most of her life growing up in Rock Hall, Maryland on the Eastern Shore of the Chesapeake Bay.

Her nursing education began at the Rolling Hills Hospital School of Nursing in Elkins Park, Pennsylvania and later at Abington Memorial Hospital in Abington, Pennsylvania. She completed her nursing degree at the Mississippi County Community College in Osceola, Arkansas.

She later moved to Florida where she lived for thirty-four years and worked in surgery at the Tampa General Hospital. Changing pace, she accepted a position with the Hospice of the Florida Suncoast, now Suncoast Hospice, where she eventually retired.

While living in Clearwater, Florida, Reverend Dooley studied metaphysics at the College of Metaphysical Studies and later became an ordained minister, a certified medium and a spiritual counselor. In addition, she practices alternative modalities such as therapeutic touch, reflexology, past life regression, is an artist, and does numerology profiles.