RAINBOW MEDICINE: Therapy with the A-Team! 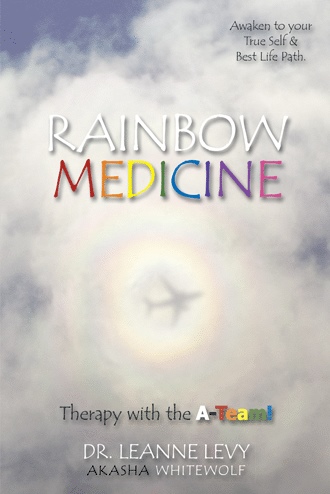 Everyone loves a mystical experience believing it’s a sign… Chances are, it is! We all have an Angelic team (A-Team) of spirits who root for us, love us, want to help us manifest our desires and dreams, and see us succeed on our highest path. Ultimately, what they all want for us is to come into greater self-love, self-worth, and personal truth so that we may learn from our experiences, understand the lessons of the whys, forgive ourselves and others for any wrongdoing, clear our karmic debts, and discover and use our gifts to live a fulfilling life. Just because they are in a higher dimension with greater understanding of the larger whole doesn’t mean they don’t feel our pain, cry with and for us, and have lessons to learn and karmic ties and debts to make good on. When we hurt they hurt, when we shine they shine. They are with us every step of the way. So please know that when you heal yourself, you also heal your entire ancestral bloodline, in every direction of time. Together, Spirit and I developed a language to help you coheal and cocreate your best life with your A-Team, we call it Rainbow Medicine: Therapy with the A-Team. This Instructional Guide about Spirit Communication and Holistic Healing will awaken you to your True Self and Best Life Path. Through sharing up close and personal experiences, professional cases, and healing and psychic mediumship development exercises, we teach you how-to recognize the signs, decode spirit communication, conduct holistic health readings for you and your pets, discover your purpose and path, and engage in therapy with your A-Team to face your fears, heal yourself and your relationships, and live your best life, now. All exercises focus on holistic healing; psychological, emotional, physical, and spiritual. No prior experience with Spirit necessary, all levels welcome.

DR. LEANNE LEVY, a.k.a. Akasha Whitewolf, combines therapy and psychic mediumship in her holistic healing and teaching practice. She helps people heal codependent patterns of suffering, and excavate, develop, and use their gifts for personal growth and professional development. The author divides her time between Montreal, Quebec; Boca Raton, Florida; and online where she gives readings, therapy, and teaches the language of spirit communication and holistic healing. Her clients and students come from all walks of life, with varying professional backgrounds. Please visit her at www.rainbowmedicine.co