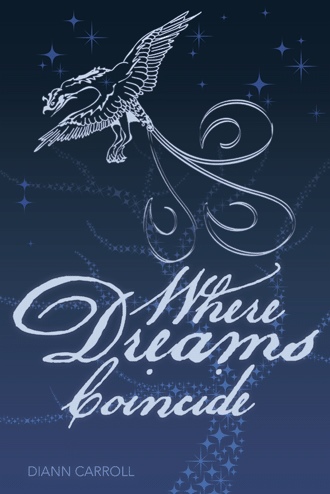 Where Dreams Coincide—Catalog Excerpt I wake by the gurgling fountain in the harem of my father’s courtyard where I’ve cried myself to sleep. Though I look up and see you for the first time, it’s not the monochromatic tawny hue of hair, eyes and skin, the thin mustache and full mouth, the broad, square shoulders and jaw — nor even the expression of capacity and determination I recognize in your deep-set eyes—but the Source that joins our minds as your eyes bore down unblinkingly holding my gaze as story after story unfolds spinning infinity into an instant … With great effort, I wrest myself from the force of your presence. “Who are you?” “Richard.” The resonance of your voice and name strikes a chord echoing up the corridors of my dream…Richard, Richard, Richard…vibrating so powerfully my mind shatters into a thousand pieces, each fractured piece like a mirror reflecting back my image as you. “What are you doing here?” I rise from the fountain’s edge looking down at the pattern my prostrate body has left in the damp sand. Breathing in deeply the moist scent, I withdraw into the dry, dusty shadows of the alcove to pull myself together, but as I look at you from the shadows, our eyes lock again. “Amira.” “How do you know my name?” “From my dream,” you answer and we are drawn into a realm where the dream and waking worlds meet and—where they overlap—our vision becomes omniscient. At a ship’s rail, we stand listening to the moon as she spins tales connecting the stars with her reflective light, weaving a story where our souls intertwine…. … a fragment of the dream passes before my mind’s eye, and I hear my mother say: You will know him by the bird wearing rings. An image of me riding on a horse with a man dressed in the costume of the Shammar tribe passes across my mind. “Yes, I will rescue you from this ill-fated marriage dressed as a Shammar as the dream prophesizes,” you say responding to my thoughts. “Indeed, we have witnessed the same dream.” We look into each other’s eyes and read the profundity of our connection… I turn my attention to the prophecy of the dream chanting your name over and over in my mind --- Richard, Richard, Richard. Though your name is foreign to me, it rolls familiarly across my tongue inspiring an unreasoned confidence. My mother’s voice has guided me from beyond the veil to heaven’s gate… There was a time when my vision was unveiled like mothers, but my vision clouded as I became aware of the walls surrounding me. Contrasting my life with stories my mother told of her childhood, I grew to resent my father for having stolen my inheritance. To my vehement complaints, mother would reply, “Amira, you are God’s gift from this union. Such a gift could only spring from the Divine. Nothing in God’s creation is an accident. Accept God’s will and your destiny shall be revealed.” But I was too angry. I watched with a resentful filter before my vision, distorting Truth. Then, my mother’s passing totally eclipsed my sight. Though my mother's gift did not appear to be forthcoming in me, the possibility of my being latently endowed with such a talent—coupled with my mother’s power to withhold her own—had prevented my father from trading me in marriage. That is, until she left this world, and I proved to be useless to him. One did not need to be clairvoyant to predict what would come to pass. “If she cannot protect my trade with the gift of sight inherited from her mother, she will protect it by marriage to the sheik of that quarrelsome Aneza clan!” my father shouted in frustration, after haranguing me for months to produce profitable advise for his trade as mother had done. With his usual shrewdness, he proposed the marriage to Sheik Abu-Aneza, carefully guarding the fact that I had not inherited my mother’s gift. Quite the opposite, in fact—he propagated the myth that I had, asking for unequivocal travel rights for his caravans through Aneza territory as a bride price. The patriarch of the Aneza tribe painstakingly negotiated with the various clans of the hitherto impassable Nejd and arrived at a guarantee of safe passage. Most girls—unaware of their own prowess—would submissively accept such a fate, but this proposed marriage kindled in me the most profound feeling that this would not be my destiny, no matter what my father said or did. And I told him so, without mincing a single word, thus driving my father to such extreme anger I thought that his death would save me from the ill-fated marriage. Poised to strike, he thought better of marring my appearance before the wedding and ordered me out of his sight. So, I cried myself to sleep by the fountain—having, in a fit of madness, driven everyone in the harem away from me. In my dreams, mother reawakened in me the Light which throws no shadow… And just when I thought all was lost, you appear. ###

In the courtyard of her father’s harem, Amira forebodingly awaits the arrival of her betrothed, Abu Aneza, an old sheikh of a desert tribe pivotal to the safe passage of her father’s caravans through the desert. On this fateful day, Amira is saved from the dreaded marriage by the surreptitious arrival of a man from the Divan of the Sun, as predicted by her recently deceased mother in a dream. Richard, the stranger who is no stranger, echoes up from her dream, unleashing the dormant supernatural powers passed down to her through the centuries via her grandfather, Farud’d-Din Attar, and the mystical Simurgh of Persian lore.

Amira travels with Richard on the Ship of Souls from the Persian Gulf to the Land of Hind seeking liberation and reunion. Through her clairvoyant powers, she flies on the wings of the Simurgh––that timeless being from beyond the world sea that flaps its wings and manifests many from the One. Sailing on the Sea of all Being she travels––nonlinearly––in multiple dimensions shifting her point of view as she seamlessly transforms from one facet of Being to the next, beyond time… Where Dreams Coincide.

Where Dreams Coincide is a first novel—and lifelong dream realized—for Houston-based writer, mother, teacher, and entrepreneur Diann Carroll. The literary enthusiast and eternal student of spirituality initially conceived her story 30 years ago, while living on the littoral of the Persian Gulf.