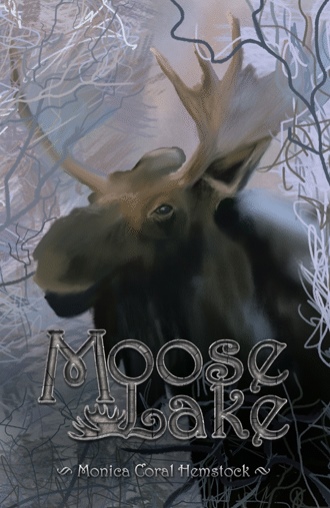 I was nine years old and in grade four when I first met George. He tripped me

one day in October while I was daydreaming and waiting for the bell to ring. I was in the

school yard and I fell against the steel pole of the chain link fence. My face smacked

along the pole before I fell in a heap at George’s feet. His boots were covered with

muddy, wet snow, but even with one eye watery and stinging with pain I could tell

that if his feet were this big then I was in deep trouble.

“Get up brat,” he said as I lay there trying to catch my breath. My heart beat

madly. Should I get up? Or should I just ignore him and maybe he’d go away?

“Get out of here, fat ass,” yelled a familiar voice. My brother, Bryan, was

pulling me up to my feet. George was standing his ground and I got my first look at

him. He was the same height as my brother who was staring him down. Their eyes were

locked into position and angry. George’s eyes were brown and bloodshot. He looked

like he hadn’t slept for a week. His parka was dirty and his scarf had food stains on it.

I pictured him sitting at a table surrounded by his family and eating in his coat and toque. I started to laugh, but, I was jolted away from this daydream when I heard Bryan say, “Come near my sister again and I’ll pull your head off.” Boy, would Mum be upset if she heard this I thought. Mum thought Bryan was like Clark Kent, not superman.

I wasn’t going to tell Mum about Bryan’s threat. I looked at my brother. My hero. His pale face had become red and his freckles stood out. His eyes seemed bluer than ever. “Thanks” I said. I couldn’t think of anything else to say and my eye was really painful. “Don’t tell Mum” was all he said. “Get some ice for that eye” he yelled at me as he ran off to his friends.

I looked around the school yard with my one good eye. Well, there was certainly enough ice. In winter, our town was mostly snow and ice. I looked up at the icicles hanging from the school roof. They glistened and sparkled like fairy lights as the sun’s rays beamed down on them. They looked good enough to eat. In fact, I remembered my neighbour, Freddie, had thought so too. And he ended up in hospital. My Mum told me that Freddie had made a big mistake. “Angela don’t you ever do that. Bacteria are too small to see without a microscope. But, they are dangerous.” Her face looked pretty scary as she told me. I was really little then. I wondered which was scarier, Mum or bacteria? I didn’t want to find out. So, I’ve never eaten icicles. And, I guess if you shouldn’t eat them, then putting them on a black eye wouldn’t be such a great idea either. I decided to find the duty-monitor and ask her for some ice from the school kitchen.

The school monitor this year was Mrs. Johnstone. She lived down the street from me on Purdy Lane. She had her red arm band on. This arm band was handed down from school monitor to school monitor through the years. My mother said that Mrs. Johnstone wasn’t unkind just very firm and a bit of a ‘nosey Parker’. “She’ll make a good monitor,” my Mum said as she handed me my dinner last night. But, I could tell that she was just glad that she didn’t have the job. I remembered her saying to my Dad that our school ‘left a little to be desired’. He said it wasn’t too bad for a mining town.

“Mrs. Johnstone, Mrs. Johnstone” I puffed and huffed through my bundle of scarves around my throat and mouth. I was trying not to slip on the ice. My mother always bought me boots that were a size too large so that they would last a few years. I did start to slip just as I reached her so I grabbed onto her arm and clasped onto that red badge. “Hey there, girlie,” Mrs. Johnstone grunted. “Don’t pull me over with you!” She was starting to slide ever so slightly and her short fur-trimmed boots were filling with snow as she put her feet quickly into snow plough position and came to a successful halt. She swore under her breath. A lot of people at my school swore out loud. But, Mrs. Johnstone was a school monitor, not just anybody. I was just going to ask her for some ice for my eye when I started to see little things like snowflakes appearing. The pain behind my eye was bad and suddenly I was unable to stop myself from fainting into a heap of coat and scarves at Mrs. Johnstone’s feet.

When I woke up I was in the First Aid room lying on that old raggedy couch. Someone had removed my coat, toque, scarves, mitts and boots. Mrs. Johnstone had probably done that. She was sitting on a stool in front of the Red Cross cabinet with a peculiar look on her face. It seemed to be a mixture of relief, humour and boredom. “How are you feeling, Angela?” She said in her clipped voice. “O.k. I guess, I murmured. My head ached now as well as my eye. I guess I hit it when I fell I thought to myself. “You gave us a bit of a scare there when you passed out,” said Mrs. Johnstone. Her lips were quite pursed. Her orange lipstick leaked up into the lines above her lips. Us, I thought. You gave us a scare she had said. I looked around, being very careful with my head because it was throbbing. I didn’t see anyone else. Then I remembered that my Mum said when people speak like that they are using the royal ‘we’. I guess that is how the Queen speaks. I wondered if the Queen wears orange lipstick. “Classes have started, Angela,” she continued. “Do you feel that you can go into class, or would you like me to phone your mother and a friend can walk you home?”

I certainly didn’t have to think long and hard about that question. I always hated having to go into class late after the bell had rung. Everybody stared at you as you took your seat and the teacher glared at you for the rest of the day. “Can my friend, Carrie, take me home please?” I said as I tried to look even worse than I felt. “Yes, I’ll have her summoned and I’ll let your mother know that you are on your way,” Mrs. Johnstone said her lips pursing even more now. ‘Summoned’, I thought. ‘Summoned’, hmmm. I wasn’t entirely sure what that meant, but, it seemed like some more royalty talk. My Mum would approve. She was always talking about the Queen.

With a flourish, Mrs. Johnstone sprang from her stool and yelled through the little window opening above the Red Cross cabinet into the office. “Please summon Carrie Farkas to the First Aid room.” This was one of the great things about living in a small town. Everyone knew what grade Carrie Farkas was in and who her teacher was. So I knew that Carrie would be here with me soon and I’d be able to escape this sick room and get back out into the cold, crisp air of Moose Lake.

This first book in the series The Moose Lake Chronicles sets the stage for the unfolding adventures of Angela, Carrie, and Roland as they brave the winter weather, bullies, wolves, haunted houses and the oftentimes very embarrassing adults and siblings that are an everyday aspect of their lives in the Northern mining town of Moose Lake.

There is more to this one-hotel one-cinema town than meets the eye. Though set in the twenty-first century, Moose Lake is unique in that technology is limited and children do not text or carry cell phones. Families sit down together in the evenings and discuss things while eating dinner, and children run from house to house and garden to garden as though they are living in the 1950s. Nature is predominant and retains its mystery.

In Moose Lake, the ordinary elements of everyday life are colourful in and of themselves. However, it soon becomes clear that while the majority of characters, especially the adults, are oblivious to the magic in their town, some of the children are seeing another realm; a realm that is not super-imposed or parallel, but co-exists and is merely invisible to the majority of adults.

Monica Hemstock is a Life-Writing teacher and an Angel Therapy ® Practitioner with a Master’s degree in English Literature. She is the author of numerous publications on wellness and writes the Kids Column for Healthy Living Now magazine. Monica is the owner of Awakening Spirit, a healing arts center in Ontario.