My Cancer Journey – A rendezvous with myself 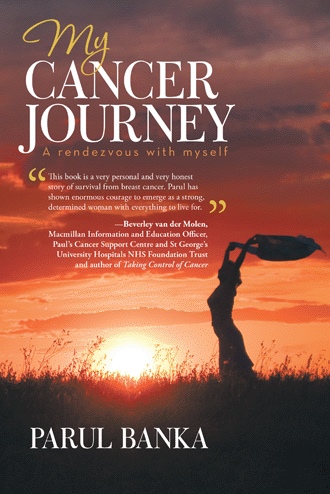 Abhi and I have known each other for more than a decade. He is tall and thin, and I am short and, shall we say, not quite so thin. He devours chocolate every day and gains no weight. I seem to put on weight just by buying all that chocolate for him. I enjoy cooking and hate cleaning up, and he’s fine with cleaning up and hates cooking (works well for us). He loves reading business magazines; I read often, but rarely business magazines. He accepts many ideas and values because they are handed down to us in the name of tradition and culture, whereas I must challenge everything that I am asked to do. He chose to study the quantifiable, finance, whereas I studied the unquantifiable, human behaviour. He specialises in negotiating contracts, while what works for me is connecting with people by talking. We may be as different as the East and West, but we are in sync on critical things: being able to make each other laugh, and standing by each other when it really matters.

And so, that day in the little consultation room at the hospital after being told that I had cancer, Abhi and I held each other and shed precious tears. This was the only time Abhi cried during my entire cancer experience, and it was the first time I cried. I don’t know why we both cried at that moment: was it the diagnosis of a serious illness or the fear of mortality associated with it? Was the 80% chance of survival not good enough? Was it because something had just kicked us in the guts without warning? Was it because our safe world had so swiftly fallen apart like a house of cards? Was I crying for the difficult time ahead of me, and the potential loss of a breast – or was I crying for the pain to which Abhi would be subjected? Was he crying for me, or was he crying because there was a (20%) chance that he might be left alone? Was I crying because I might not grow old with him and be there to laugh at the silly things we had done together? Was I worried if anybody else would understand Abhi like I did – would anybody else know how he felt about things even before he knew it himself? Did we cry because his presumption that bad diseases happen to other people had just been ridiculed? Whatever the reason, we held each other silently and the pain gripped us.

The day had just begun in the US when the phone rang. I had been waiting for this and sprang to answer the phone. On the other end, there was my sister and she said, ‘The doctors have confirmed cancer.’

No training in this world prepares you to receive such news. My mind and body became numb and time seemed to freeze. Everything looked blurred, hazy, and uncertain. There was an upheaval of thoughts in my mind. Soon the initial shock was overtaken by anger: Why my family, and why my sister? Once the news had sunk in, the worst of all emotions surfaced: F-E-A-R. Fear of the uncertainties that lay ahead, fear of what came next, and the fear of losing my sister. I felt helpless because I didn’t have the power to change anything or to somehow make her cancer go away.

I struggled with my emotions. Eventually, my mind and body were exhausted; I couldn’t hold back anymore, and I cried. I searched for answers. I wanted to know why it had to happen to us, but all I got was a cold vacuum.

Considering everything that had just happened, I was surprisingly calm. I understood the facts clearly, and I was neither in shock nor in denial about the cancer. I didn’t feel like a victim, either. I understood that cancer is an illness, albeit a difficult one. Considering myself a victim wouldn’t help, that is not a good frame of mind to be in. I was not devastated either. I definitely was confused about the Karma bit, but I didn’t feel angry about the diagnosis. Lots of people think, ‘Why me?’ But interestingly, when the cancer happened, I never asked this question. I never blamed God for giving me cancer, nor did I whine about how ‘life is not fair’. I think what was happening to me was life, working in its own peculiar way. As I turned to find answers within myself, I knew that I must use cancer as an opportunity to do something – I was not very clear what exactly this would be, but it would definitely be something. I felt ready to embark on the roller coaster ride that lay ahead of me.

I was the new bald and beautiful!

We walked back towards home and before we went in, Abhi clicked some pictures of me. He put his arms around me, and I drew towards him in anticipation of a hug. He pulled me towards himself, but before I could ensconce myself in the safest place I know, he exclaimed, ‘You have a mole on your scalp!’ He was excited at his new discovery about me. He held my finger and directed it to the mole that had been hiding under the hair all these years. We giggled about the new mole like it was the funniest thing on earth.

He went on to say something I hadn’t expected him to say, ‘We grow when we face adverse situations. We are like trees and shrubs; we need to be pruned in order to flower. Every tough situation that we go through makes us strong. We learn through adversity.’ He added, ‘I have seen so many people go through cancer, and survive. Many of them come back and say that their lives changed forever after cancer, and not necessarily for the worse. Cancer is a life-changing experience. Let it be an experience that changes things for the better for you. And… it’s OK to be scared about how many years you have, but more importantly, you are here today – that is what matters.’

Cancer gave me the impetus to work on things that I had wanted to do for a long time, but hadn’t got around to doing. I used the ‘cancer time’ as an opportunity to forgive and seek forgiveness. There were certain relationships from the past in which I had not achieved closure. Either I had been hurt about things, or I had hurt others. I was able to get in touch with some of these people, and come to what can be closest to closure for incidents that have already happened and cannot be changed. I also used this time to let go of my hurt and forgive many people with whom I had been angry or disappointed. And I invested energy in forgiving myself, for things I had done in the past and was not proud of. There are many relationships that I cannot heal now, as it is too late for doing so. But it is never too late to come to terms with what has happened, grieve, forgive, and move on. Some of these people are no more; I have lost contact with many others. I realised that at times, I had been too hard on others, and on myself. Therefore, the best thing was to face what had happened, let it go, and move on. It was like ‘closing the loop’ with people who had mattered to me at least once in my lifetime. Cancer as a medical condition showed me the futility of holding angst in my heart. I now understand that it is possible to lose your life, people, meaningful relationships, work, and peace of mind, in a single all-changing moment.

My book My Cancer Journey – A rendezvous with myself is a candid narration of my encounter with breast cancer. It is the story of an ordinary woman who was put in extraordinary circumstances, and who undertook her cancer journey with the utmost courage.

This memoir is not just about describing a difficult medical condition. It is about going through the experience, and emerging from it wiser and stronger. It is about using cancer as a life changing experience, despite all the trauma and the loss – and the change needn’t be for the worse. It is about understanding the choice that a human being has – the choice to accept what cannot be changed, and to use one of the toughest fights of life to evolve into a better person, irrespective of the prognosis. Pick up a copy to embark on a rendezvous with your inner self!

“A factual, informative and profound book, truly from the heart. I highly recommend this book, and it offers some important insights from holistic therapy.”

“Parul’s account of her experience with breast cancer and what she found helpful will be a useful companion for other young women finding themselves in a similar situation.”

“This is book is a very personal and very honest story of survival from breast cancer. Parul has shown enormous courage to emerge as a strong,determined woman with everything to live for.”

Parul received a unique gift on her thirty-fourth birthday: a breast cancer diagnosis. The new predator growing inside her threatened to take away a breast and probably her life.

She explores fear, loss, courage, hope, love and the choice to change for the better in difficult circumstances during this life-changing experience.

She lives in London, UK with her husband, Abhishek.