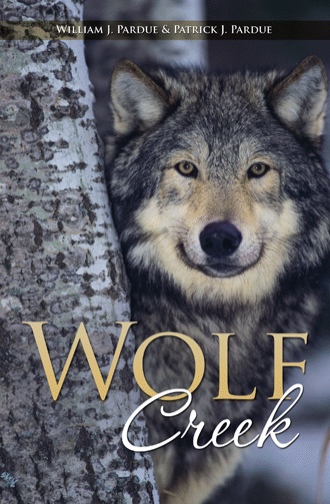 "The first indication of the boys’ arrival was the cry of grinding gears pulling the last hill into the campground. Charlie watched the small school bus approach at a rapid pace along the main campground road, his eyes subdued by inner doubt. The time for preparation gone, he was destined to meet the unknown in a state of less confidence than usual.

The school bus pulled to a stop in front of the picnic table and a group of young boys poured forth like a school of sharks. Their keen senses picked up the smell of fresh blood and in a frenzy they began to sniff out their prey.

Charlie was seated on one end of the picnic table while Bud was on the other. Bud had his back turned towards Charlie and his eyes focused on the new arrivals. In the immediate confusion that ensued the two men were given a few minutes to scout the boys.

The main body of the boys, obviously familiar with Mr. Johnson and knowledgeable of his influence over their lives, formed a circle around him and began shouting disparate demands. From Charlie and Bud's vantage point Johnson appeared to be handling himself well enough. Considering his position as the potential granter of certain privileges, he was treated by the boys with all the discretion they could muster.

From his still somewhat protected position, Charlie identified two blacks, one olive-complexioned youth, obviously Italian, and six white Anglos. Their sizes ranged from five-foot-two to five-foot-ten and maybe one-hundred-and-ten to one-hundred-and-sixty pounds. Two common traits which Bud and Charlie readily identified were a vast supply of energy and a blind hunger for acquisition. Within the first two minutes of the boys’ approaching Bud, Charlie could see that he had gone through a whole pack of Winstons. As soon as one had been given, word had spread and it had become obligatory to supply the entire group. Charlie was also briefly scouted out, but when it was discovered that he didn’t smoke, interest quickly faded.

Johnson had begun to receive a rougher handling. A bevy of queries demanded "Where are my fucking letters, my money?" and "What in the hell am I doing way out in the boonies?" Johnson cleverly fielded all the questions with a patient smile and elusive rhetoric. The boys, apparently familiar with this variety of answer, persisted. Aware of the futility of their quest for an answer to all their problems, they hammered even harder.

Charlie remained rooted to the end of the bench, feeling lucky that he didn't have to deal with the initial onslaught. The Italian boy, David, as Charlie later learned, sauntered towards the bench directly opposite Charlie.

Charlie remembered seeing this one emerge from the bus. He clearly recalled that he had come through the front door, taking his time. He had been the first one off and none of the others had attempted to hurry him. He was a handsome young man, probably fifteen, with dark hair and dark eyelashes, the kind girls love to coo over. His olive complexion covered soft features and a finely sculptured nose. His immaculate hair and clothing displayed an obvious pride in appearance. Charlie quickly gathered that the boy devoted a great deal of attention to personal grooming. He studied Charlie carefully with what appeared to Charlie to be a total lack of self-consciousness and shyness. The boy’s general demeanor was what Charlie would expect of a Mafioso boss, patiently judging the character of an adversary whose fate was already sealed.

The table was rapidly filling and Charlie could feel himself being nudged closer and closer to the end and a hard spot on the ground. Meanwhile, David, in his position across the table, seemed to gain space in direct proportion to Charlie’s losing it.

David bummed a light from the boy sitting on his right, who obviously heaped authority on David. David took a deep drag on his cigarette, then slowly turned his full attention to Charlie. The rest of the boys followed in turn, each broadcasting his lust for a quick and bloody showdown.

David’s words, accompanied by the swarm of mocking faces, burnt Charlie like a hot iron.

Charlie’s voice shook noticeably as he replied. "Charlie, my name is Charlie you little asshole. What's your name?"

Charlie, as a general rule, was well-mannered and self-composed; however, when pushed to the point of anger, he could be dangerous. He could never recall using that particular expression with a kid before, but there appeared to be very little of a kid left in his antagonist other than the lack of his full growth.

The sound of jeers passed quickly around the table.

It is the summer of 1971. Twenty-one-year-old Charlie Rogers has just graduated from the University of Texas in Austin and is hitching a ride toward the backwoods of East Texas. His first adventure along the uncertain and open-ended path of adulthood is a job as a counselor for a group of emotionally disturbed, delinquent adolescents from the south side of Chicago. Charlie’s will, his responsibility, and his confidence in his ability to persevere against the trials of life will be tested in his attempts to guide the manic behavior of these directionless boys. The boys have been unwanted by their parents, the system, and the boys’ ranch where they currently reside, as they will soon be sent off to the watch of Charlie and the other counselors, where they will yet again become someone else’s problem. There is Russ, who displays unpredictable bursts of sadistic violence, Sherman, whose illiteracy is offset by his good cheer, Vince, whose recklessness is matched by his spirit and determination, and seven others. The events in this story are true, though the names have been changed. Wolf Creek is a story of maturation, the strength of the human spirit, the cruelty of humanity, and the power of love and friendship to mend even the most broken of hearts.

William J. Pardue Attorney and Author living in Santa Cruz, California wjpbooks.com parduebooks@gmail.com Patrick J. Pardue Patrick Pardue is a young writer with dreams of making a positive impact on the world with his work. He has been writing since he could first pick up a pencil and has no plans to stop at any time in the near future.