Haiku that Healed my Heart 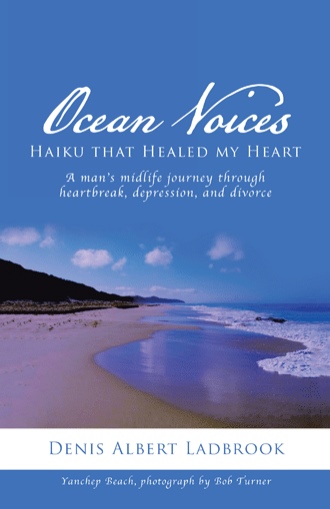 Haiku that Healed my Heart

A man's midlife journey through heartbreak, depression and divorce

The very word ‘divorce' has a chill about it: disconnected, torn apart, alone. The experience triggers even icier feelings: abandoned, forsaken, jettisoned, desolate. The topsy-turvy emotions of breakup and divorce don't lend themselves easily to narrative prose – they're too turbulent, too fast changing, too unlike the even-keel state we usually inhabit. But they do lend themselves to haiku, an ancient Japanese poetic form that occupies only seventeen syllables. Haiku specialize in drawing parallels between dissimilar things – in this case ocean phenomena and a man's emotions. Ocean Voices consists of 260 haiku written by author Professor Denis Ladbrook, and 32 culled from 15th – 19th Century Japanese poets. The emotional lives of many medieval Japanese poets is threaded with their connection to the forests, streams, mists, snowfalls, insects, mosses, and people who celebrate their ancient rituals. They are wonderful tutors to the scientific and materialist West, for they focus so gently on nuances and the fifty shades of meaning that moments, ambiguities and uncertainties contribute to the art of noticing.

Trembling in every wind...

Ocean Voices charts the way one emotionally bereft man navigated his way through a turbulent sea of conflicting loyalties and life commitments:

It’s hard to hold on

I feel I'm slipping away

Into the dark sea

Alone in the deep

Denis lived on the edge of the Indian Ocean in Western Australia, and in the winter of his downtime he found resonance with the moods of the swirling sea, its waves and winds:

I can hardly stay upright

Standing on the cliff

My heart sinks to the bottom...

We men are often baffled by the power of our emotions, especially the heart's gentler and sadder feelings, so we hold them in. Our womenfolk are often puzzled by our moods, outbursts, vacuity and silences; and by our difficulty in finding the words to express them. I became curious, and embarked on a quest to expand my emotional awareness. A starting point was to Google up lists of words that I knew from literary sources, but which didn't feature in my spoken vocabulary. I started to match words with feelings I'd been subtly aware of but couldn't name, and found that they expanded into similes, images and metaphors. These metaphors fitted my style of haiku expression. Then I found myself attributing my feelings to the waves and winds:

Throughout the dark night

The process of writing feelings down, of translating experience into words, helped me to capture more completely some inchoate meanings flickering in my mind. I found that writing clarifies and crystallizes. It gives birth. The Word becomes flesh.

A triple breakdown in relationships, work life, and health leaves Professor Denis Ladbrook teetering on the brink. Inspired by Carl Jung's idea that the ocean symbolizes the unconscious —the great source of life, emotion, and soul — Denis chooses to leave the city for the seaside hamlet of Yanchep, an hour's drive north of Perth, Western Australia. Tiptoeing down a steep dune track to the water's edge as dawn breaks each morning, Denis walks far along the beach, immersed in sounds of wind and waves. His sensations morph into words. Stumbling through emotional desolation and divorce, he trudges the ocean shore until he discovers the rhythm of the ancient Japanese poetic shape, haiku. Among the book's almost three hundred haikus, Denis includes thirty‐two written by medieval Japanese poets. Over the year, the healing energy of the ocean, the ritual beat of walking, and actually writing the poems enabled Denis to let go and flow with the tides. Raw emotions allying with capricious ocean moods give the collection its energy, transforming brokenness to wholeness.

Denis Albert Ladbrook grew up in Sydney and Zimbabwe, earned his PhD in Wisconsin, and currently lives in Perth, Australia. A divorced father of three, he has addressed audiences on six continents and published fifty articles.